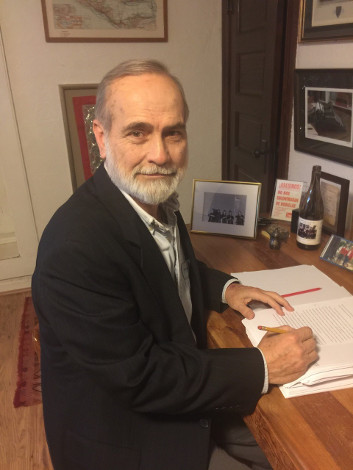 Hemingway. Ernest Hemingway. The noted American author, widely admired and often parodied, was many things over his long career, from amateur boxer to open-ocean fisherman and world traveler. Along the way, he dropped into some of the ugliest war zones in the world of his day, casting his lot with the underdog in the fight, whether the French Resistance or Fidel Castro.

Along the way, too, he got tangled up in some heady threads of espionage. So suggests Nicholas Reynolds in his new book Writer, Sailor, Soldier, Spy, recounting a story that, Reynolds says, “found me.”

It did so in Reynolds’s role as historian and curator of the CIA Museum, working for an agency he had moved to after serving as a senior officer in the Marine Corps. There, while browsing in the archives, he found material suggesting that Ernest Hemingway had more than a casual involvement with the Office of Strategic Services, the wartime agency that evolved into the Central Intelligence Agency. Moreover, the Agency’s files also contained materials that documented Hemingway’s recruitment as an on-the-ground, eyes-and-ears adjunct of the NKVD, the Soviet Union’s precursor to the KGB, work that never amounted to much in the way of what the spooks call “actionable intelligence” but that still put Hemingway in the crosshairs of the rival FBI, the working-class gumshoes to the OSS’s patrician band of officers.

All this evidence was suggestive rather than definitive, a good mystery story in the making, but Reynolds has taken it and worked up a careful narrative that looks into how deep Hemingway’s involvement ran and what it constituted. “I’m trained the old-fashioned way,” he says. “Like a pointillist painter, I work dot by dot, very close to the material, and tell the reader, Okay, here’s a landmark, and then between this and some other landmark here are some of the places I think we can go to. I go to great pains to identify what I consider to be fact and what I think is reasonable conjecture.”

It’s a fact, for instance, that Hemingway acted as a kind of go-between in China, delivering messages from both the Communists and Nationalists to various departments of the U.S. government. It’s a fact that he provided information to the NKVD, motivated, Reynolds writes, by the indifferent reception he met when he reported to American officials on the Spanish Civil War, a kind of proving ground for the world war that soon followed. It’s a fact that Hemingway recruited a few likeminded adventurers and patrolled the waters off Cuba, reporting to the U.S. embassy on the movement of ships out at sea.

Weaving all these stories together may have proved a challenge, but the picture that emerges from Reynolds’ book is quite consistent with the Hemingway other biographers have given us. It also shows us the writer as the man of action that he always strived to be—and, Reynolds reveals, it turns out that Hemingway accomplished more than just liberating the bar at the Hotel Ritz in Paris, doing more than his part to help defeat the Germans in the last months of the Second World War by tracking troop movements and describing the lay of the land.

Did Hemingway commit treason by aiding the Soviets? Since he signed up in 1940, Reynolds says, he could have been guilty of the Neutrality Act, but probably nothing more—and in any event Hemingway had little use for communism as an ideology. “J. Edgar Hoover himself put a note in Hemingway’s FBI file saying, ‘This man is no communist.’ Instead, Ernest had a political philosophy of antifascism, in big bold letters,” says Reynolds. That matches a bold personality big enough that writers on Hemingway, whether looking at his novels or at his less public activities, can still find new things to say.