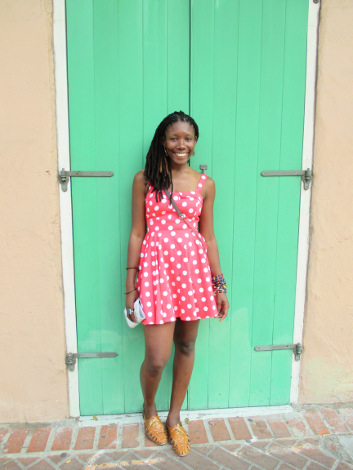 In 2010, Nicole Dennis-Benn took a Jamaican vacation. But she wasn’t a typical tourist.

“Growing up there, I had this image of what Jamaica is,” says Dennis-Benn, who was born and raised in Kingston, the nation’s capital and largest city. “When I visited for the first time as a tourist, at the resort, I wasn’t getting the real culture—it was a performance. I knew for sure that these individuals were going home to nothing after giving us the fantasy.”

The experience inspired one of this summer’s most stunning and substantial literary debuts. Dennis-Benn’s dazzling novel, Here Comes the Sun, gazes into the unsung lives of three working-class Jamaican women from an impoverished village outside Montego Bay. They live in the shadows of luxury resorts, in proximity to paradise, but without any access.

“You can marvel at the beauty, but only a little bit, while driving by,” she says. “Seeing the resorts, the excursions that tourists have—‘let’s swim with the dolphins, let’s do the yacht tour’—regular Jamaicans don’t get to see that, you know? There’s a huge disparity there.”

Margot, 30, a desk worker at tony Palm Star Resort, sells sex on the side to rich white tourists. Her mother, Delores, a souvenir seller at Old Fort Craft Park, talks up T-shirts and folk art figurines to the tourists’ wives. Their combined income funds the private school tuition of Thandi, 15, Delores’ younger daughter, a straight-A student.

“She doesn’t see it as demeaning,” Dennis-Benn writes of Margot’s prostitution. “She sees it as merely satisfying the curiosity of foreigners; foreigners who pay her good money to be their personal tour guide on the island of her body....Replacing her disgust is a liquid hope that settles inside her chest and fills her with purpose. She rolls over in the bed she shares with her sister knowing that one day she won’t have to do this. That one day Thandi will make everything better.”

Her mother and sister believe she’ll become a high-earning, high-powered doctor or lawyer who will repay their investment “tenfold.” Thandi, however, has other ideas of how to earn the advanced status and success each covets. Chief among them is lightening her skin via creams and treatments purchased from a neighbor, Miss Ruby. She daydreams about a certain dress whose vivid color will highlight the tonal shift at an upcoming party.

“Thandi is neither the nutmeg-brown that makes Margot an honorable mistress—a rung lower than a bright-skinned wife—nor is she black like Delores, whose skin makes people sympathetic when they see her. ‘Who want to be black like dat in dis place?’ Miss Ruby once said to Thandi about her mother.”

Though her three unforgettable protagonists belie the fact, Dennis-Benn conceives of Here Comes the Sun,first and foremost,as a story of place.

“For me, it was [a story] of a place, definitely, and then these working-class women’s experiences with that place,” she says. “I wanted to tell the story through these three women without seeming didactic but still showing each of them—the struggles that they have in terms of identity, race, sexuality, and socio-economic status—in relationship to Jamaica.”

Dennis-Benn has lived much of her adult life in the United States. She is a graduate of Cornell University and holds a master’s in public health from the University of Michigan, Ann Arbor, and MFA from Sarah Lawrence College. She is the founder and director of the Stuyvesant Writers Workshop and lives with her wife in Brooklyn, New York.

“In terms of which character is closest to the experience I had in Jamaica, it would be Thandi,” she says. “I also was a working-class girl who went to an elite high school, afflicted with that same internal conflict of, ‘Oh, I’m surrounded by the daughters of ambassadors and all these wealthy people but feeling like less than and thinking the only access is really lightening my skin.’ ”

Thandi keeps her skin regimen a secret from her mother and sister—along with the fact that their money’s going to fund it. They, in turn, keep the deeper, darker secrets of what they sacrifice to provide for her.

“We’re from a culture of secrecy,” Dennis-Benn says. “Everything is about respectability, propriety....Every time, you have to be aware of how you look, how you speak. You cannot speak patois in public, only in private—all these things that you have to be thinking about. In terms of private things, washing out clothes in the public river—that’s forbidden. We have so many secrets that we don’t talk about, including the sexualization of young girls.”

Margot’s life is littered with things that must be kept “hush hush.” While she serves the needs of men for financial gain, she’s truly in love with a woman.

“It never feels wrong when she’s with Verdene,” Dennis-Benn writes. “But late at night when the whole world seems to pause around them, leaning in like the shadows of the mango trees and the moon against the window to observe two women spooning—one adrift in sleep and the other wide awake, her breathing rapid—paranoia keeps Margot up at night.”

Gay and lesbian Jamaicans have been shamed, shunned, attacked, and killed for expressing their forbidden love. In Here Comes the Sun, Margot recalls a news story of two women who were burned inside their house, their deaths celebrated by the community. Verdene was previously forced to flee the country when a same-sex liaison went public. She escaped to England to live with a sympathetic aunt.

“I had worried about Margot’s narrative, in all honestly, because I’m also still connected to Jamaica,” she says. She thought, “Oh my gosh, when they get to Margot’s narrative, will they dismiss it? That was a genuine worry for me. Jamaica is really homophobic, so even the mention of a lesbian or gay person, it could definitely trump the story. Of course, it depends on what kind of Jamaican reads it—for the Calabash [International Literary Festival] crowd, it’s fine. For the other crowd, if they just pick up the book by mistake and say, ‘Oh, what’s this?...’ ”

According to Kirkus’ starred review, Here Comes the Sun is a “haunting and superbly crafted...magical book from a writer of immense talent and intelligence.” “Writing Here Comes the Sun—it was a liberating book for me,” says Dennis-Benn. “These are the things that I purged on the page to let people be aware of the fact that this is our story.

“What does it take to be ruler of your own destiny when you’re not given the tools or the right?” she asks. “How do you survive or get ahead? That’s something that I want to tap into.”