One Cool Cat (And His Monk) 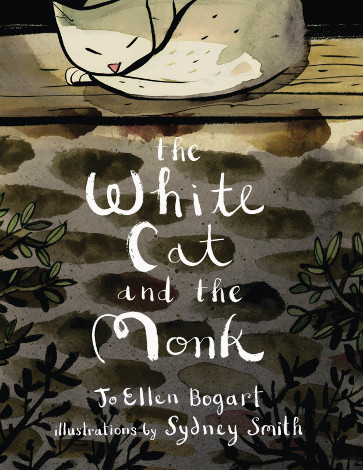 The notions of feeling content with very little, as well as being patient for answers to come in their own time, aren’t popular ones in our culture of excess and industry. They’re also not stories oft-covered in picture books. But it’s handled elegantly in Jo Ellen Bogart’s The White Cat and the Monk, illustrated by Sydney Smith.

The book is an illustrated retelling of a ninth-century poem, called “Pangur Bán.” The poem was written by an Irish Benedictine monk, who paused in his work to write down some thoughts after having spent some time studying the cat in his presence. The monk’s identity has never been proven, though it’s believed he may have been teacher and grammarian Sedulius Scotus. (If you saw the superb animated film The Secret of Kells, you may recall that there’s a white cat named, in honor of this old Irish poem, Pangur Bán.)

Bogart doesn’t write her adaptation of the legendary poem in rhyming couplets, as the original was written. Her retelling is a spare and eloquent one. No wasted words here. In fact, the book opens wordlessly; for two-and-a-half spreads, readers follow the white cat of the poem, as he makes his way into the monastery and up to the monk’s door. Illustrator Sydney Smith, best known for last year’s widely popular and critically acclaimed Sidewalk Flowers by JonArno Lawson, breaks up several spreads into panels that propel the story forward.

The monk in the story compares the tasks that lay ahead of him with the cat’s primary job—to catch a mouse. “By candle’s light, late into the night, we work, each at a special trade.” The monk’s work is bittersweet: as he tells the reader, he enjoys his peaceful studies and the pursuit of knowledge, but his eyes are older and “less bright” than the cat’s. Smith depicts him, in one particularly stark and touching spread, bent over a manuscript, his eyes weary and his body hunched. “Each page is a challenge,” Bogart writes.

At the same time, the monk notes that both he and the cat are content and that their stories are happy ones, even despite the fact that the monk longs for an epiphany that hasn’t yet come. Eventually, we see that the cat has succeeded: He’s caught his prey. As for the monk, he finally finds joy in discovering the answer to his own puzzle. Here, he heads for the window, as both he and his pet follow a butterfly. The final spread—the cat in the window, looking out on a beautiful landscape of both light and dark—reveals that the monk has found “light in the darkness.” It’s a beautiful closing spread with an affirming, if alluringly enigmatic, sentiment.

Smith’s artwork, rendered in watercolors and ink, is beguiling. In a couple of spreads, he gives readers an up-close peek at the monk’s manuscript, featuring (no less) a monk and a white cat. It is here we get splashes of color; the rest of the book is dominated by earth tones—browns, greys, muted yellows. His lines throughout are graceful, lithe. There is so much restraint here, so much room left for the reader to step in and wonder. Smith also uses growing light in the spreads to communicate a good deal about the camaraderie between the monk and his beloved pet.

And that right there is really the heart of this tale—a story of two contented friends, who want for very little beyond companionship.