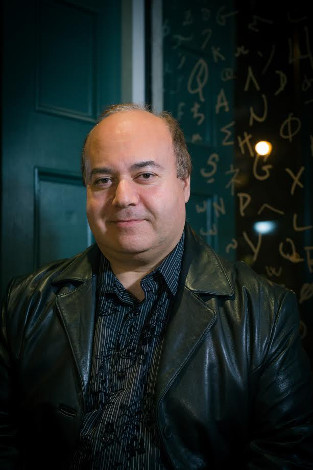 Syrian writer Osama Alomar’s very short allegorical stories are extolled in much of the Arab world for their incisive wit and sly commentary on the region’s capricious sociopolitical landscape, yet here, in America, where he’s lived in exile since 2008, they’re still being exhumed. 2014 saw the U.S. release of Fullblood Arabian, his first body of work to be translated into English as part of New Directions’ Poetry Pamphlets series, and this year, Alomar is publishing his second brilliant collection, The Teeth of the Comb & Other Stories. With champions like prominent short story writer Lydia Davis shepherding his work into the American literary scene, Alomar is making strides toward an auspicious future. But getting to this point hasn’t been easy. Whereas he now has the luxury of being a full-time writer, thanks to City of Asylum Pittsburgh, in the six years leading up to the publication of Fullblood Arabian, he was caught in an existential limbo, adjusting to his identity as a refugee in a new country.

“The first year I couldn’t write anything because I was confused. I didn’t know what to do. I couldn’t find a job,” Alomar recalls. “I stayed at my cousin’s house for seven months and eventually he told me, ‘You need to find a paying job now.’ I told him I was a full-time writer in Syria, and I want to be a full-time writer here. He laughed at me.”

Not long after, Alomar took a job as a driver for Horizon Taxi Cab in Chicago, a job that he held until he became a writer-in-residence at City of Asylum earlier this year. The hours were grueling—10- to 12-hour days shuttling passengers to and from O’Hare Airport. It takes a certain spirited resilience to endure such hardships, and, as is evident in his nimble, evocative stories, Alomar’s natural gift is to take what’s before him and, with his crystalline prose, transform it into magic.

Alomar may occupy a foreign land, but the world he’s created is distinctly his own. And his stories work in pursuit of the truth. They’re snippets of knowledge, acerbic pieces of candy for the mind that awaken our senses and beckon us to consider the mark we’ve made on history. The voices within Alomar’s pliable reality belong to humans, personified animals, man-made objects, and the natural world. They are those of disgruntled worshipers, world-weary dogs, arrogant lightning bolts, and vexed books elbowing for room to exist in a society consumed by greed and power. In one story, a proud garbage bag toils to climb a literal “social pyramid” only to be fatally ripped when he reaches the top. In another, “The Knife,” Alomar succinctly renders the human condition in just two sentences: “He was born with a silver knife in his mouth. And he was its first victim.”

It’s no surprise that this collection feels particularly germane given that its author is both a refugee and from a war-torn country whose people are currently being denied their humanity by not just their president, but ours too. Though his vantage of Syria has manifestly shifted, Alomar’s hands aren’t tied behind his back; in fact, they’re writing, with great intensity usually around midnight, when the noises outside the windows of his home in the suburbs of Chicago fall to a quiet whisper. “There are Syrian refugees everywhere now, so the Syrian disaster affects the whole world,” says Alomar. “You cannot separate the U.S. from any other part of the world. It’s the same world. It breaks my heart, but I can do nothing. I’m still alive, and I can keep writing.”

Stephanie Buschardt is an editorial assistant at Kirkus Reviews.