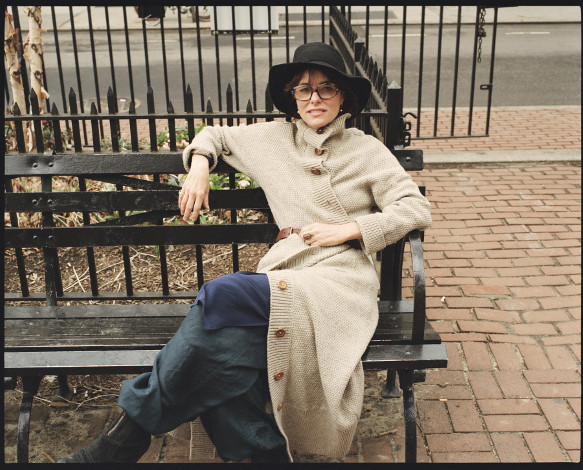 At the age of 5, Parker Posey was driven by her father to the house of Mr. Manny, the very small repairman who, her father said, worked inside their television. When Mrs. Manny, who was of regular height, answered the door, Posey asked to meet Mr. Manny. He wasn’t available, his wife said, because he was asleep inside his matchbox. How could Mrs. Manny be married to someone so tiny? Did Mr. Manny ride on record-player needles for fun? Was he friends with the people who lived in the bookshelves on Captain Kangaroo? Posey never got the answers to those questions because, she writes in her memoir, You’re on an Airplane, she was “too shy and stunned to ask anything else” after she learned that Mr. Manny was asleep in his matchbox. This was also around the time that Posey’s father liked to ask her, with a serious expression, “What if you never got any taller?”

That Posey is the offspring of a prankster who went to the trouble to orchestrate a small production to pull off his prank won’t surprise anyone familiar with her screen work. Known most widely for her inspired comedic roles in the Christopher Guest mockumentaries like Best in Show and Waiting for Guffman, she’s now playing the villainous Dr. Smith in the Netflix version of Lost in Space. In the ’90s and early 2000s, when American indie film still felt like something entirely separate from posher Hollywood output, Posey was often cited as the “Queen of the Indies.” She appeared in films by Richard Linklater (her role as Darla, the caustic cheerleader in Dazed and Confused, is still considered legendary), Hal Hartley, Rebecca Miller, and Julian Schnabel. More recently, she’s been in Woody Allen’s Irrational Man and Café Society.She’s not averse to big-studio productions—she performed in You’ve Got Mail, Superman Returns, and Blade: Trinity, for example—but her heart, it is so easy to tell, beats for off-kilter fare.

During the heyday of American indie cinema, it felt like Posey could be a new kind of Hollywood star. She seemed to be everywhere if you were a fan of indie film or if you noticed who went to the hip New York and LA parties. She is talented, immensely at ease with herself, funny, screwball, vibrant, and perceptive. There was something different about her than the other stars of her generation: In talk show clips from the ’90s and in party photos from that era, it’s so clear that she was in on the joke. Celebrities go on talk shows to tell stories about themselves, and those stories usually feel a little oily and definitely rehearsed. Look at ’90s talk show clips on YouTube of Posey and you’ll see: She couldn’t tell a story straight to save her life. She moved around like a nervous child, shooting her legs out one minute and tucking them under herself, as if she were trying to fold herself into the chair, the next. Some stars believe they were born to be famous; Posey always seems thrilled she was invited to the party.

It’s natural, then, that You’re on an Airplane is unlike any other celebrity memoir. “I’m not great at being a movie star,” she writes on Page 12. She turned down working on Anaconda, the 1997 blockbuster film, because “I didn’t want to wrestle with snakes or be in wet clothes while at work.” After she got fitted for the fangs she wore in Blade: Trinity as a 1,000-year-old vampire named Danica Talos, she wore them around the East Village in New York and ordered a sandwich at the deli. The summer the shoot for Waiting for Guffman ended, she liked to shout from her open window to strangers on the street below that she was running for mayor of New York and then hide so she could “watch them look around.” There was a period when she liked to get the attention of pedestrians crossing the street in front of her car by calling out, “Excuse me! Are you a vegan?” The book has a brief passage about some petrified poo Posey’s beloved childhood dog Oblio left behind that Posey discovered after Oblio had died; she saved it in one of her grandmother’s handkerchiefs. Readers who don’t care for wordplay and puns are forewarned:Posey thinks they’re going out of style. (Three weeks after being cast in Irrational Man, Posey broke her wrist and said to her doctor, “I got a big break being cast in the new Woody Allen film.”)

Posey’s inability to conform to Hollywood’s proscriptions about how movie stars comport themselves and her unease with acting in schlocky movies have made her finances shakier than those of stars who more easily fit into the rigorous role of being famous. Nora Ephron, who directed and co-wrote the screenplay for You’ve Got Mail, in which Posey played Tom Hanks’ petulant girlfriend, sent Posey an email a few months before she died. “Dear Parker, I love watching your life from the middle distance,” she wrote. “No one has a career like yours, and although I understand it makes for moments that have to feel less than secure, it also means you have so many things you would never have done if your life were more conventional.”

Posey tells me that the fact that she’s not a household name isn’t necessarily because she has high standards about the parts she chooses. “The roles for women are so few and far between,” she says. That is undoubtedly true. “I think with all the arts it has just gotten so much more conservative,” she adds. She cites the rise of reality TV and the global superhero and video game franchise movies Hollywood has banked on recently. And it’s true that those kinds of movies don’t feel like Parker Posey movies. “So it's not even integrity,” she insists, that’s holding her back.

There’s a telling passage in You’re on an Airplane, however. Around 2005, Posey reconnected with an old friend she refers to in the book as Joseph who had become the head of casting at a major studio. He thought she would be good to play the mom in an upcoming comedy, and not just because Posey could help guide the 13-year-old actress who would be the star of the film. Posey “tried to read the script,” she writes. On Page 2, the script calls for her character to make out with her boyfriend in front of her kids at breakfast before they boarded the school bus. On the ride to school, the daughter talks about blow jobs with a girlfriend. “Garbage pail, please!” Posey writes.

She had dinner at a new restaurant in LA with Joseph, who tried to convince her to take the part. “I’d read enough of the script that afternoon to have a lot of questions,” Posey writes. She said to him:

“Why does it have to be so inappropriate and gross? It’s so weird that Hollywood makes this material sexing up thirteen-year-olds. You know that’s why other countries hate us, right? And this is a conservative country, mainly, with religious people who don’t want their kids even watching this, so who is it for? Is this for pedophiles?...Why does this material get made, produced? I don’t understand, I truly don’t. And it will never make money, I can tell….” Blah blah blah! The words just kept spilling out.

After her confession, of sorts, Posey began sweating, and the roll she was eating tasted like a “soapy sponge.” Her friend admitted that he hadn’t even read the script. “My insides were swirling…and nothing made sense as Joseph’s face became a hypnotic spiral wheel,” she writes. Posey needed fresh air, so she and her friend rushed outside the restaurant. She vomited four times on an enormous potted plant that was conveniently the “perfect height” for her disgorgements. “I needed to touch someone, to just hold the hand of someone fun and nice, which luckily I was able to do,” she writes about Joseph.

There was a nearby party they were going to attend after dinner. “Hollywood types were arriving across the street to the party I would now not be attending, which was too bad,” she writes. And that is a perfect Posey anecdote: It’s funny; it’s a little over-the-top; it boldly depicts her vulnerability; it’s guided by her conscience; and it is most definitively the antithesis of what you expect a celebrity to disclose about herself.