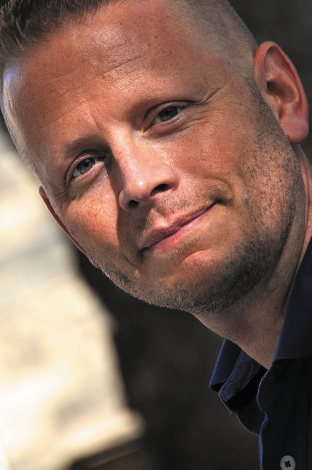 So there’s this kid named Adam. He has evangelical parents, an ex-boyfriend he’s in love with, and a current boyfriend with whom he’s not. Or is it vice-versa? Then there’s the ghost of a dead girl in-between chapters. She’s got an awesome name, a crummy past, and she’s being trailed by a giant faun. Oh—and there’s some Mrs. Dalloway undertones too, ‘kay?

The Release pitch from Patrick Ness was likely more eloquent than the above, but if anyone can get away with proposing a coming-of-age mille feuille of homosexuality, religion, the supernatural, and Virginia Woolf, Mr. Ness is a likely candidate. Speaking to him on the eve of his departure for the Québécoise set of Chaos Walking only confirms this notion. He’s succinct, honest, and diplomatic without drowning his voice in politesse.

“This story is a very personal one. [Adam] is not entirely me as a teenager but that’s my starting point,” says Ness when I press that never-not-hot button topic of diversity. The cast of Release is polychromatic, multicultural, and pansexual. But the main character is a good-looking, blonde, Caucasian male, antithetical to the diversity poster child. Or is he? “Yeah, he’s a blonde, white, American kid but he’s also a gay blonde, white American kid,” Ness says. “Let’s not pretend that that’s somehow a majority in the United States. If it was it would have made dating a lot easier.”

Ness is careful to stress that though the book is based on his own experiences, Release is not a direct translation of his own adolescence. It’s just the same flavor of what he gleaned in that long transition between teenaged years and adulthood. He defines it as a rich time of experience and experimenting and it’s this richness that makes it such a great landscape for YA.

“It’s the first time you step away from your family and self-identify, saying I am no longer this thing, I am something new,” he says. “I am my own person; it’s also kind of a violent step. You’re having to break off into a new universe and find out who you are, what your boundaries are, and what matters to you.”

In the course of a day (remember that Dalloway reference?) Adam is unearthing what matters to him and who matters to him. Friendships, amorous relationships, parents, sibling, work, money, love. As he forges toward clarity, he has to decide if the callous treatment by several figures in his life, namely his self-righteous parents, is something he’ll continue to endure. The aha moment when Adam’s father chooses a faltering career promoting the holy trinity over supporting his own son, is as despicable as it sounds.

“What I was most hoping to show with Adam’s father was that he makes what is clearly the wrong decision,” says Ness, quick to state that this isn’t a caricature of his own father. “He is choosing religion over his son….But what I really tried to do is leave the question open: will he always be like this?”

Ness layers his characters with this kind of hope, glazing them with some residual optimism. It’s a crossover from his belief that shutting yourself off from letting people change is dangerous. But that isn’t to say mistreatment should be allowed in the meantime. It just means being able to finally say: yes, I deserve happiness and fulfillment and hopefully you’ll surprise me later by being a good person.

“If you give them a chance, people will always surprise you,” says Ness. “They’re always more than just a simple label. My family are a deeply religious family…but four years ago, they all came to my wedding. And these are Republican voters and devout Christians. But they all came and they all liked my husband so it’s really that—letting people surprise you.”

Something that might not surprise readers is Ness’ love of running as a form of release—a commonality with Adam and a theme that threads itself through his other works. “Running shows up a lot in my books,” he says. “It’s meditative. I can do it by myself. And it’s great for your brain. I solve a lot of plotting problems when I’m out running.”

Apart from work on the Chaos Walking set, Ness has a new book turned in and headed for shelves next year. Pleading professional omertà, he can’t reveal anything about it, but if he’s done as much running as he claims in order to absolve plot problems, he and his next book will be incredibly fit.

Gordon West is a writer, illustrator, handletterer, and shark enthusiast currently surveying the states for his next East Coast home.