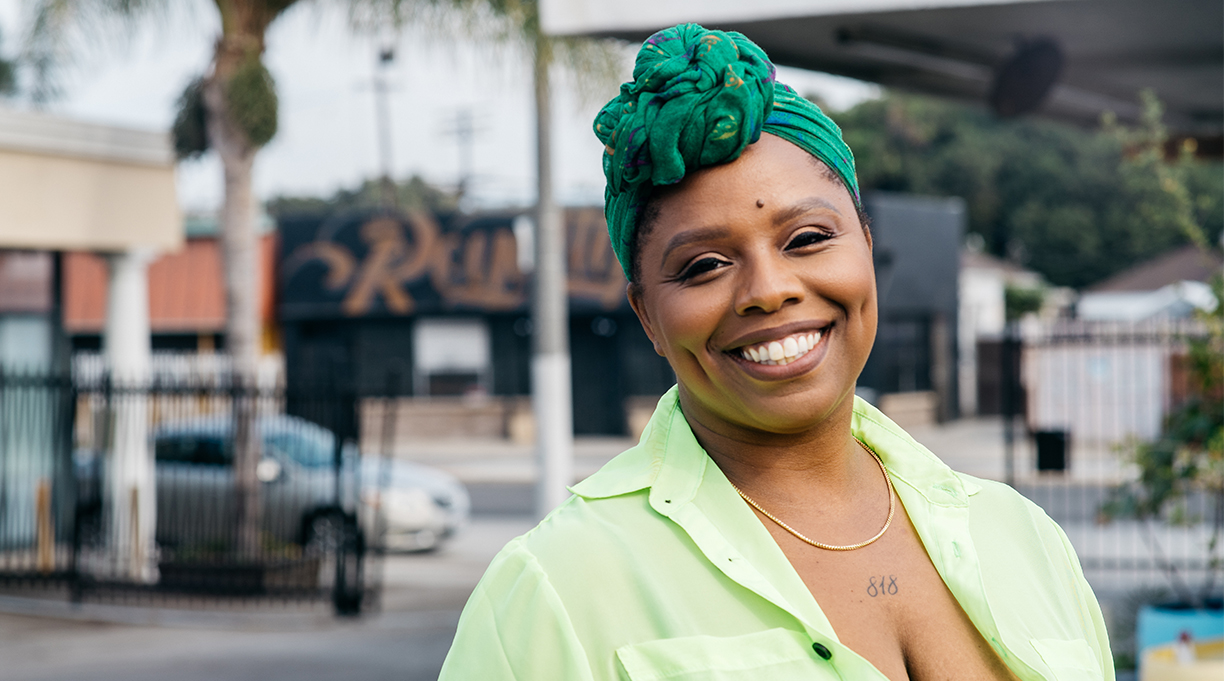 With the release of When They Call You a Terrorist (Young Adult Edition): A Story of Black Lives Matter and the Power To Change the World by Patrisse Khan-Cullors and asha bandele, adapted by Benee Knauer (Wednesday Books, Sept. 29), teens can get to know one of the co-founders of Black Lives Matter, someone who is among the most influential figures shaping public discourse today. This edition of Khan-Cullors’ adult memoir packs the same emotional punch and is enhanced with questions at the end of each chapter that serve as a scaffold and inspiration for further discussion and action, making it ideal for classroom use. An intimate, self-reflective account of childhood, family, and community, the book will resonate with many while providing critical context and understanding for others. Khan-Cullors spoke to me from Los Angeles; the conversation has been edited for length and clarity.

Your memoir is so honest and intense—and the questions feel emotionally buoying, helping readers digest your words and connect your ideas to their lives.

I am a millennial—I’m speaking to everybody, but I am speaking specifically to a younger generation of activists and organizers. I didn’t realize it was going to be so timely. [I wanted] to share some of my childhood thoughts through my journal entries, and I thought a lot about what kinds of questions I would have wanted to have been asked as a young person. [When] I read Assata Shakur’s memoir—and Angela Davis’ and Elaine Brown’s—there weren’t YA editions, and I would have loved a set of questions to respond to and to be thinking about. So I was tapping into what I would have needed and also the themes in the book—mental health, racial justice, issues around [being] queer, transphobia, issues of blood parents and nonblood parents. Even though it is a memoir, there’s talk about systemic issues—we just happen to be telling it through my story. The questions give anyone who’s reading it, but young people in particular, the opportunity to pause and reflect.

Educators increasingly recognize that it is essential for teens to understand the issues Black Lives Matter activists are talking about, but they are often fearful of parental push back.

I went to a magnet program which was 80% White, and it was a social justice program, so we learned a lot about racism and many other -isms and issues. There were always at least a few White parents who had an issue with what their children were being taught. I thought that the educators really responded well, often [by] bringing the White families into the conversations alongside the parents of color to learn about the curriculum. For educators who want to teach this book and are worried, especially now under this government [about] being able to teach about what’s happening in the world around Black Lives Matter, I would encourage [them] to involve parents. That doesn’t mean it’s going to be a fix every time, but sometimes it’s a deep need. There are people who have not been engaged or [who] are watching only Fox News and so they don’t know the real issues. I would encourage educators to think about how you can have parents and guardians engaged in the educational process.

How did your own teachers at school get everyone engaged in having these courageous social justice conversations?

Many of the students of color came from low-income neighborhoods, neighborhoods that were overwhelmed with police violence and overincarceration, and so there was a deep desire to be engaged in a way that we hadn’t been [before]. It was the first time that I heard words like racism and social justice. As much as our teachers brought us that curriculum, it was also my peer group: We really were like sponges, and we were more than excited to learn about these issues—we adopted them as part of our daily lives, as part of our belief systems. I think there was a bit of surprise [over] how the class of 2001 graduates of Cleveland High School [in the Reseda neighborhood of Los Angeles] took the curriculum, but the educators were really excited about our enthusiasm, and many of us went off to volunteer at youth leadership programs and then to become journalists and activists. There’s a whole crew of my friends who are some of the best organizers in the country, and it has a lot to do with the program and the educators who committed to us.

You are clear that the Black Lives Matter movement is intentionally inclusive, and I was struck by the statement against ageism—one of the -isms that gets relatively little attention.

We started Black Lives Matter in our late 20s, and often times ageism really is coupled with a lot of [other] things, like racism and gender oppression. For us, being free from ageism is really [about] challenging the idea that young people are unable to make the kinds of changes that are necessary, [that] we don’t have the right strategy because we’re “inexperienced.” Or the idea that older people are stuck in their ways and they can no longer join or be a part of a powerful movement.

You write movingly about your family members and how their mental health was affected by systemic racism—terrifying struggles with getting adequate mental health support and ongoing experiences of brutal violence rather than compassion and assistance.

Conversation around mental health has become much more popular in the last few years; on the other hand, we have a long way to go. Mental wellness shouldn’t just be a luxury for the few: We should all have access to being mentally well—everybody has some form of mental health challenges, just like our physical bodies have some form of challenges. So I think it’s important that we normalize mental health issues and that it becomes a conversation that we’re all having. What would it take for us to have the kind of wellness in this country that we deserve? We know that racism, sexism, homophobia, transphobia, ableism, and systemic oppression have deep impacts on our mental wellness, and so it feels important that mental illness isn’t [framed as] this individual thing that happens to people outside of a system that really does create so much mental unwellness.

Many other marginalized groups and individuals benefit from the gains of Black activism, but building alliances across communities can be hard; what have you learned from your work in this area?

That it’s hard. That we live in a country that has historically and purposefully divided us across gender, race, and class and that when we make a concerted effort to unite—not in sameness but in our differences—that that work is challenging work but so fortifying. As people galvanize around Black Lives Matter we’ve seen how fortifying it is for the people who are doing it but also for the larger conversation around challenging systems. I think the scariest thing for fascist governments is for people to unite. As much as there is divisiveness, there’s a deep profound willingness and desire to unite so that we can get closer to freedom.