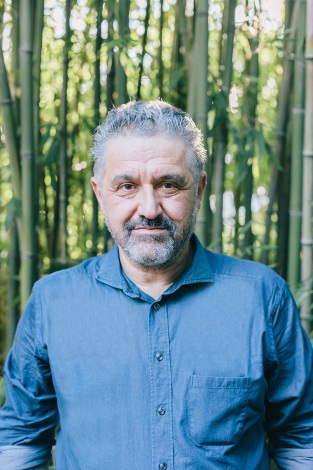 Paul Goldberg was halfway through writing The Château—a novel that sets a microscope on a predominantly-Russian, largely pro-Trump condominium in surreal, sun-blinding Hollywood, Florida—when the presidential election rolled around.  And then the unimaginable happened.

“As much as I was absolutely certain Hillary was going to win,” Goldberg recalls, “there was a little voice in my head saying, ‘Oh crap, we might be screwed.’ ” He promptly pushed the novel’s timeframe ahead to January 2017 before the inauguration, and tweaked the narrative to account for Trump’s win. This put him in the bizarre position of writing the future as it unfolded around him.

A delicate feat, to be sure, but Goldberg relished the challenge. “It’s a tall order, bridging journalism with a novel,” he explains. “But I like writing in such a way that the reader is waiting for me to wipe out and break my neck. It reminds me of a high wire walker in a circus—there’s an element of jeopardy. You’re not waiting to see how the person will get across. You’re sort of waiting for them to fall.”

A fear of falling features prominently in the book, which tracks Bill M. Katzenelenbogen, a recently-fired Washington Post reporter who travels to Florida after his college roommate, the “Butt God of Miami Beach,” Zbignew Wronski, falls to his death in apparent suicide. While he’s ostensibly there to report on Zbig’s death, he quickly becomes enmeshed in the goings-on of the Château Sedan Neuve, the crime-riddled condominium in which his estranged father lives. A community of elderly Americans and vodka-drinking Russian emigrants, the condominium complex—rife with corruption, authoritarianism, and xenophobia—is a microcosm of Trump’s America.

Within that structure, Goldberg drills down to the polarities that define his characters and the political moment. Among the starkest involves Melsor Katzenelenbogen, Bill’s father. Once a refusenik in Soviet Russia, Melsor has morphed from an icon of Soviet Jewry to a perpetrator of Medicare fraud and ardent disciple of “Donal’d Tramp.” He is running for a seat on the condo’s corrupt board of directors, and enlists Bill in translating short poems alternately deriding the condo’s lackluster maintenance and extolling Trump. (“Way to go/Brother Putin gave us quite a president!/No way Trump would have won,/FSB hackers got it done!”)

Considering this shift, the protagonist wonders, “What is Bill’s role in this struggle? Has Bill’s father become one of them?” Yes and no. “I wanted to write a very powerful character who is trying to survive….There’s a metamorphosis in Melsor. He goes from being a cultured and sophisticated Moscow resident to being, you know, a tough Jew.” Melsor’s is a life-and-death state of mind unimaginable to Bill, who moved to America at the age of 14, attended Duke, and has never been a Soviet political dissenter. It’s an evolutionary response, the ability to bend one’s convictions to meet the demands of reality.

It isn’t just Melsor who’s built on hypocrisy. As Bill takes in the condo—halfheartedly gathering intel for Melsor, and playing into a rumor that he is an FBI inspector—the community’s inherent contradictions register bit by bit. At the pool, cliques of American Jews huddle together, whispering and scolding the Russians to speak English in public. “Some years ago, in the 1970s and ‘80s,” writes Goldberg, “these very Americans displayed ‘Free Soviet Jewry’ signs in front of their houses of worship….Now, they would happily display a big neon-lit ‘Take Them Back’ sign in front of The Château.” And then there’s a corrupt Jewish man on the board of directors who has close ties to the daughter of a concentration camp commander.

As the condo board elections draw near, Bill is driven to confront buried aspects of his identity—his relationship with Melsor; an on-and-off romance with a former reporter; his Russian identity. The inauguration looms, and there’s a sense of history repeating itself. Much of what Bill’s been pondering comes to the fore at the board’s candidates forum, which involves the performance of outlandish Russian songs penned by Melsor, a dramatic maintenance disaster, and Bill’s effort to, if not forgive, then at least acknowledge the man his father has become.

Though The Château is complete, Goldberg is not quite done dissecting the questions brought to the surface by Trump’s rise. He’s at work on a second book in what he envisions as perhaps a trilogy. “It’s a question of how much indignation you have left,” Goldberg explains. “The next book is about governance, and the unpleasant surprises of governance in this microcosm of America.”

And even as America comes to grips with the manifestation of some of its darkest forces, Goldberg sees a valuable role opening up for writers in society. In a sense, it’s backed by an internal conflict. “As a citizen, I’m not happy. As a writer, I’m happy as I’ve ever been because this is a way of saying, for a writer, that something matters, and of giving writers an opportunity to become more important in framing key questions for people,” he explains.  “It’s a writer’s duty to reflect the times.” And though he’s made his living through journalism, Goldberg plans to continue participating in this movement as a novelist. “It could be easier fictionally, in a sense—you can get straight to the soul of things.”

Miriam Grossman is a writer living in New York.