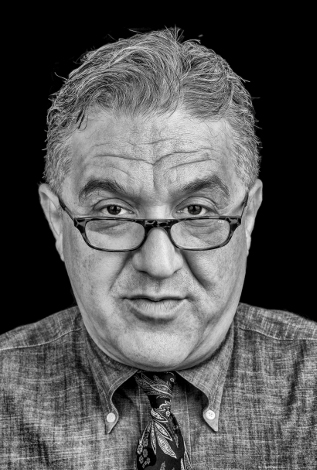 In 1969, when he was 10 years old, Goldberg was walking with a friend’s father in his native Moscow. “He points to this one specific doorway in Moscow and says, ‘Here in 1944 they arrested this Jewish woman for having killed a Russian child. She put [the girl’s] blood in the matzos,’ ” Goldberg recalls. “I said, ‘Whaaat?’ I hadn’t heard of such a thing.”

The notion of blood libel—the grim anti-Semitic assertion that Jews murder Christians and use their blood in religious rituals—was a striking piece of folklore for a pre-tween to grow up with. But it wasn’t the only one Goldberg learned about at an early age: he also heard tales of Stalin’s pogroms and the Shakespeare stories that Yiddish theaters were staging with a subversive, anti-Communist intention. Goldberg eventually emigrated from Russia—he now lives in the Washington, D.C., area, where he’s a journalist covering cancer and the healthcare system. But the older stories stuck with him, and they all feed into his antic, witty debut novel, The Yid. “We don’t really get to choose our own material,” he says. “It kind of finds us.”

The Yid is a quirky mixture of tones, blending the somber import of Bernard Malamud’s The Fixer with the madcap humor of Gary Shteyngart. The story is set in 1953, shortly before the death of Soviet premier Joseph Stalin, and in Moscow Jews are regularly seized and persecuted or killed by KGB agents driving vans in the dark. As the novel opens, Solomon Levinson, a former Yiddish theater actor, is due to be taken away. But Levinson fights back, slaying his would-be captors via a folk dance wielding a pair of daggers. Levinson goes into hiding with the help of a few cohorts, including a soldier turned surgeon and an African-American man who defected to the Soviet Union to escape racism at home. But instead of laying low, Levinson is eager to double down: What if he did more than take out KGB agents? What if they assassinated Stalin?

A running theme in The Yid is that revolutions like the ones that bring down tyrants often begin as wild acts of imagination such as Levinson’s. (One of Levinson’s collaborators asks: “Are you playing the part of the leader of a plot, or are you indeed being the leader of a plot?”) “A legend can be so much more powerful than actual history,” says Goldberg, which speaks to why Shakespeare stories play an important role in in the novel—Levinson’s theater staged a variation on King Lear—just as they did in reality. “During the Moscow Trials [show trials Stalin staged to rationalize his purges], there was a boom of Shakespeare in Moscow—his plays were everywhere,” he says. “Because with Shakespeare, you can tell stories and not go to prison.”

Synthesizing theater and Stalin along with other Soviet-era touchstones, from filmmaking to manufacturing to theater and Jewish lore, was a lengthy process. Goldberg wrote a draft of the novel in a flurry about 10 years ago; when it was rejected after a round of submissions, he banished it to the drawer. A few years later, with the  encouragement of his fiancee, novelist Susan Coll, he took another pass at it. The core of the story, however, remained unaltered. “I understood the underpinnings of the book before I sat down to write it,” he says. “I understood that I was writing a fairy tale, and I understood that I was writing about Shakespeare.”

Goldberg is working on a follow-up novel, one that's still concerned with Russia and Jewishness, and still darkly comic, but thrust into present-day Florida. “It’s a bit of a transplant of Fathers and Sons, and it’s a bit of a transplant of [The Master and Margarita author Mikhail] Bulgakov,” he says. So, not exactly Carl Hiaasen material? “My characters would not know how to find a Hooters,” Goldberg says. “They would not have a clue about how to even spell it.”

Mark Athitakis is a Phoenix-based writer whose work has appeared in the New York Times, Washington Post, and many other publications. He is working on a book about Midwestern literature.
MORE FEATURES
POPULAR KIRKUS STARS