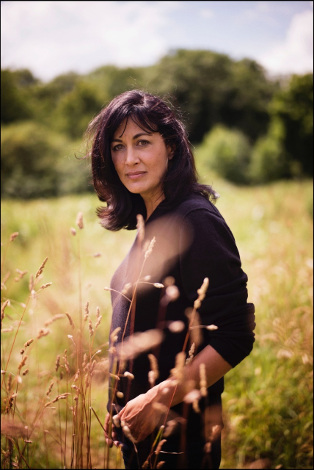 Polly Samson has had an unusual life, even for a writer. Her personal history is complex, and she tells long, winding stories about the various branches of her family. She had very little formal schooling but joined the publishing industry at a young age—writing only in secret for most of her life. It never occurred to her that enthusiasm was unusual. “It wasn’t until I had my own children and noticed that they weren’t sort of endlessly writing poetry and stories that I thought, ‘Well, that’s a bit odd,’” she says. Now she alternates between writing stories, novels, and lyrics (mostly for her husband, David Gilmour, a member of Pink Floyd).

Samson’s new novel, The Kindness, is based on one of her family tales. In the 1930’s, her great uncle Heino was living in Hamburg. He and his wife were Jewish, so they made plans to decamp for Paris. “The great tragedy” of Heino’s life was his inability to have children, so just before his departure from Hamburg, Heino’s best friend—who was himself leaving for America—offered to serve as a sperm donor and conceived a child with Heino’s wife.

For roughly four years, Heino lived happily with his wife and daughter in Paris until the Nazis once again became a threat. He couldn’t leave the country immediately, so he sent his wife and daughter to his old friend in America. Tragically, before he could join them, Heino was captured and interned. He escaped twice, eventually joining the French Foreign Legion, but it was many years before he could reunite with his family. By then Heino’s wife had fallen in love with his old friend, the biological father of her child.

Heino never got over the loss of his family, but Samson has only happy memories of his visits. When she was 11, he died. “My parents wanted to protect me from the cause of his death and told me that it was his heart, which was sort of true,” she says. “But what they didn’t elaborate on was that his heart had been so badly broken by what had happened that he’d killed himself.” She discovered the truth when she was 18 and has been haunted by the tragedy of it ever since.

At the time, Samson tried to write about Heino’s story, but felt that she couldn’t understand the perspective of a man who had lost a child in that way. It wasn’t until she was reminded of an event from her own early life that she found her way into the story.

Until she was four years old, Samson lived with her mother’s husband, Alan, who she called Daddy despite the fact that he wasn’t her biological father. But after Samson’s mother left Alan for her biological father permanently, they lost touch. Just as she was considering writing about Heino’s story again, Samson’s brother went to visit Alan’s widow. “The widow gave my brother a little shoe and said, ‘Take that back to your sister and let her know that Alan kept it with him until the day he died,” she says. “It was the moment that I received that shoe and my brother’s letter that something clicked and I thought, ‘I know exactly how to write this book now.’ ”

The Kindness is hardly a straight retelling of either of these stories, but it’s clearly indebted to Samson’s personal history. The novel tells the story of Julian, a successful writer, Julia, a somewhat damaged older woman, and their beloved daughter Mira. At the beginning of the book, Julia and Mira have left Julian, and he’s attempting to make sense of how his seemingly idyllic life has unraveled. “The way that we live our lives, in the present tense, we often don’t understand people’s motivations and why things have turned out the way they have done until they’re put through the prism of history,” Samson says. As Julian revisits the events that led up to the final calamity of losing his family, the reader is invited to interpret the story in her own way.

Even after so many years, this sense of exploration and discovery is Samson’s favorite part of writing. “That’s the joy of it really,” she says, “that you take yourself by surprise.”