In Praise of Gross Books for Kids 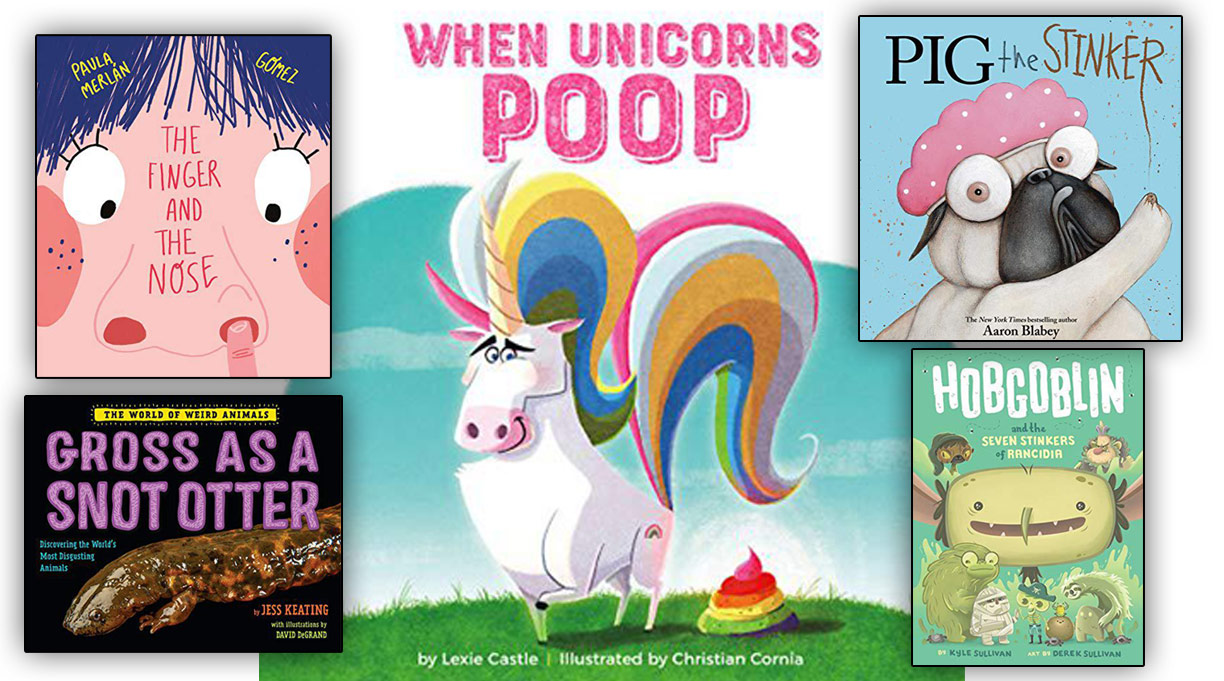 The gross book: It’s a critically underrated genre but, as anyone who’s spent time with young children will affirm, there’s a substantial slice of the readership that can’t get enough of it. Fart jokes, booger jokes, poop jokes—all are as unto a Shakespearean sonnet for them. (And lest we grown-ups forget, the Bard was not above the occasional windy passage about breaking wind.)

But something happens between the child’s robust celebration of the rude and slimy, a taste that reaches its zenith in fifth and sixth grade, and adulthood. Maturation, it seems, turns most of the population into stodgy schoolmarms when it comes to bodily eruptions and effusions. Happily, a subset of the population never loses that taste, and while many of their literary compatriots are honing their craft to lyrical perfection, these heroes of the schoolyard are reaching for broad humor.

Also happily, there are those among Kirkus’ reviewer corps who have likewise retained an appreciation for the finer points of yuck, and they eagerly apply their critical faculties to separating the stinky from the stinkers, if you will. Children deserve only the best gross books, after all, and this year’s crop has produced some delightfully disgusting ones.

In When Unicorns Poop (Running Press, Oct. 1), Lexie Castle imagines just about every possible bodily effluent and how its emanating from a unicorn might affect its properties. They sneeze glitter, spit chocolate syrup, and vomit ribbons, all illustrated by Christian Cornia with sherbet-colored verve. The book is silent on urine, blood, and pus—maybe even Castle’s stomach turned at the thought. But, as our doughty reviewer opined, “Lovers of all things repellent can consider this a sparkly, smelly present.”

With Pig the Pug, Aaron Blabey has created a stupendously unlikable protagonist, a creature who is something of an object lesson in obnoxiousness. In his newest outing, Pig the Stinker  (Scholastic, April 30), the canine antihero descends to new lows by refusing to bathe. Blabey, on the other hand, reaches new heights with loving renderings of his goo-spattered pup and the visible cloud of stench that surrounds him.

Noses can both detect the gross and be its source, as Paula Merlán and Gómez demonstrate in their odd fable, The Finger and the Nose (nubeOCHO, Oct. 22), in which young Sophie’s finger—Tim—tries to take up permanent residence in her nose. Tim gets so busy fitting out his new accommodations that Sophie’s nose grows alarmingly, and eventually Sophie and her finger must learn to cooperate in order to establish a peaceful coexistence. Like I said, odd—but the picture of Sophie’s nose’s snottily cozy interior is most memorable.

A fondness for the foul is not solely the province of fiction; purveyors of informational texts can glory in the gross, too. Jess Keating has parlayed the juvenile fascination with the strange into a successful series, The World of Weird Animals. With Gross as a Snot Otter (Knopf, Oct. 29), she takes it to the next level, offering profiles of 17 slime-covered, feces-festooned, vomit-emitting, or otherwise revolting creatures. Mary Batten and James Braithwaite reveal “What’s Cool About Drool” in Spit (Firefly, Oct.1), exploring the science of saliva—a surprisingly expansive subject. As our reviewer concluded, “A lot to digest—but easy to chew, swallow, and regurgitate.”

Perhaps the best of the most recent crop is the novel Hobgoblin and the Seven Stinkers of Rancidia (Hazy Dell Press, Sept. 17), a fantasy that turns “Snow White” on its head with a kingdom ruled by an usurper who dubs himself the Grossest Smelling in the Land. Author Kyle Sullivan’s nomenclature is what an 8-year-old Dickens might have aspired to. There’s the evil Fiddlefart and his Burping Bullfrog along with the eponymous Seven Stinkers: Grody, Yucky, Icky, Musty, Fusty, Poot, and Toot—readers will giggle through every page of this smart political satire.

Not your cuppa snot? That’s OK—they’re not for you.