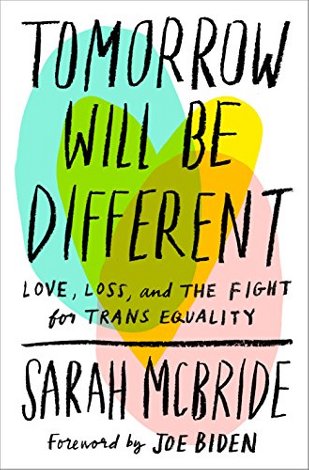 The New Negro (Feb. 1) by Jeffrey C. Stewart delves into the life, studies, conflicts, and loves of Alain Locke (1885-1954), a complicated, gay (and closeted), African-American philosopher and important historical figure. Locke extolled the work of writers like Jean Toomer and Langston Hughes, who rebuffed his advances, and helped establish Harlem as the cultural center of black America. Our reviewer has high praise for Stewart’s work: “This hefty, deeply researched book is sometimes overwhelming in its detail about Locke—every letter he wrote seems to be quoted—but it brilliantly doubles as a history of the philosophical debates that girded black artistic triumphs early in the 20th century.”

In Tomorrow Will Be Different: Love, Loss, and the Fight for Trans Equality, (Mar. 6) Sarah McBride, the national press secretary for the Human Rights Coalition, writes about her life of political activism. She recounts that her very public coming out as transgender to her college peers was about as out and proud and positive as you can get; as the student body president, she announced it on social media and in the school paper, which garnered her national attention. She served as the first transgender intern at the White House and an inspirational speaker at the 2016 Democratic National Convention. “The author ably balances great accomplishments and strong emotions,” writes our reviewer. “Reading McBride’s inspiring story will make it harder to ostracize or demonize others with similar stories to share.”

Novelist Alexander Chee didn’t intend to write a memoir, but his collection of essays loosely reads as one. In How to Write an Autobiographical Novel (Apr. 24), Chee writes about his fight for LGBTQ rights, the loss of a friend to AIDS, and penalties he faced as a gay Amerasian man. About the art of his writing, he says, “The only things you must have to become a writer are the stamina to continue and a wily, cagey heart in the face of extremity, failure, and success.” Chee offers advice and a guidebook for others facing their own struggles. His latest effort, says our reviewer, deserves “a place among other modern classic writers’ memoirs like Stephen King’s On Writing and…Annie Dillard’s The Writing Life.”

In Excuse Me While I Slip Into Someone More Comfortable (May 15), Eric Poole outlines his difficulties accepting his own homosexuality within an unaccepting peer group in St. Louis as well as his religious family. It took a gay friend to point out, repeatedly, that Poole was gay, gay, gay. Eventually, it sunk in. Our reviewer considers this one a must-read for those struggling to come out: “Punctuated with highly effective humor, this book could easily serve as a resource for any closeted individuals looking to read another success story. A magnetic collection of real stories that sheds a new light on life in the Midwest.”