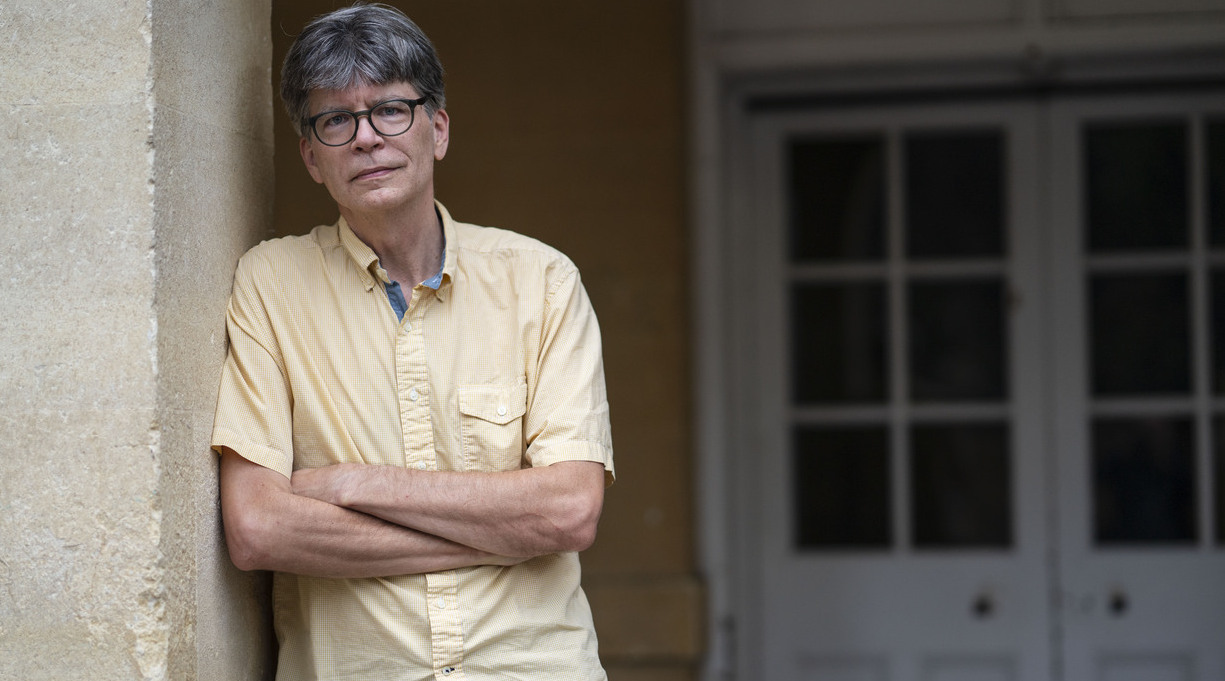 Like every Richard Powers novel, his latest, Bewilderment (Norton, Sept. 21), covers a lot of intellectual ground. At the story’s center is Robin, a tween boy who, with the encouragement of his astrobiologist father, takes part in an experiment in decoded neurofeedback—a means to connect with the neural imprints of his late mother. Robin’s consciousness expands as climate change and divisive politics call for just that kind of bigger thinking. Powers is too much the realistic novelist to suggest that one child can right society’s ship. But through Robin, Bewilderment points to the kind of empathic powers we’ll need to save ourselves.

Powers has been named a MacArthur Fellow and won a Pulitzer Prize (for 2018’s The Overstory) and a National Book Award (for 2005’s The Echo Maker). But in conversation, he’s easygoing while eager to go deep into the questions his books raise. This conversation has been edited for space and clarity.

Bewilderment is a shorter and more intimate book than its predecessor, The Overstory. Coming off an epic novel, were you looking to write something more straightforward?

It is a little bit like writing a piano sonata after writing a symphony. Maybe there was the question of exhaustion and needing to find some way of hitting the reset switch creatively. But there were other factors as well. The success of The Overstory kept me on the road for a long time, longer than I’ve ever been out for any previous novel. And it’s hard to work on a new book while you are still touring and traveling. But then of course the pandemic came along, and in a lot of ways this is a pandemic book. I was just thrown into my backyard—which, happily for me, was the Great Smoky Mountains. I had this marvelous playground to use as inspiration. The book opens there, it closes there, and it’s the most important venue for the story. But every theme calls for its own form. And with a book about empathy, a book about interbeing, it seemed to make sense to pare down and focus on these two lost guys.

A clear inspiration for the novel is Daniel Keyes’ Flowers for Algernon, which Theo and Robin read together. Were you reaccessing the kind of reading that you were doing yourself at Robin’s age?

Absolutely. I loved science fiction as a child, and as an adolescent, and as a teenager, and even as a young man. I think I made the mistake that a lot of earnest literary writers do, which is to feel at a certain age that that’s a shallower path. This is a kind of love letter to the fiction that I loved as a younger man, especially planetary romance, which was reaching a zenith in the late ’60s and early ’70s, when I was coming into adulthood.

A great book that I really fell in love with while working on the novel was Olaf Stapledon’s [1937 novel] Star Maker. It was a kind of waypoint between the island romances of the 19th century and postmodern playful experiments with the form, like Calvino. Stapledon is just this wild philosophical novelist—he’s using this device as a source of endless speculation about what it means to be alive. Alan Lightman’s Einstein’s Dreams would be another example. There’s a stylistic thrill in that form, in the way you just create a world, and two pages later you create another world.

What’s your experience with decoded neurofeedback? Are scientists close to creating the sort of psychic rapport that Robin has with his mother in the book?

Anybody who tries to make a living saying how close we are to certain technological breakthroughs is asking for trouble [laughs]. I first read about decoded neurofeedback around 2013. The things researchers were describing were uncanny. They were getting people to solve puzzles more rapidly by training them on the neural patterns of people who had been taught how to solve that problem. I read that and the hairs on the back of my neck just started to bristle. I thought, this is an empathy machine. This is going to finally give us a way to answer this ongoing philosophical question about what it is like to be something other than myself. Of course, it didn’t become that, and it probably will never become that. It’s mostly used in therapeutic contexts like post-traumatic stress disorder, and it seems to be very effective. I just push it one step beyond into what the science-fiction people like to call the near future.

You put your finger on the heart of the book—to have that slight recursive turn and say, “Wait a minute, I’ve been living this other life, and I’ve been identifying and making my own sense of well-being and anxiety and open fear, on this other life.” Novels don’t have the precise mechanical instrumental control of the experiment that I describe in the book. But in the long run, if we are going to survive, it is going to be through some transformation of consciousness. Where is that transformation going to happen? It’s got to be through the arts. That’s the most powerful and the most transformative kind of empathy machine that we have.

Are you working on a new novel?

Every time I complete something, I think, I’m getting too old for this, it’s getting too hard. This is novel No. 13—I’ve been doing this for almost 40 years. Then a few weeks go by and the stories creep back in. I do have one that is intriguing me right now. I’ll be working on it only intermittently, but that’s not bad either. I often jump too quickly and too earnestly into a new project and then have to take a lot of it apart. So maybe it doesn’t hurt to take my time.

The book features an unnamed but very Trumplike president and rapidly accelerating climate change. It goes to a dark place. How much does the vision in this book align with your own vision of humanity?

There was a debate at [my publisher] about whether this was a despairing book or a hopeful one. I was so gratified by that. Because you can’t have cheap hope. Cheap hope is not going to help us at this point. We have to have what Thomas Hardy called “a full look at the worst” in order to be able to do anything. But a full look at the worst is not the same as capitulation, or the same as nihilism.

We’ve so completely internalized this culture of commodity-mediated individualist human-exceptionalist capitalism that we don’t think it’s a choice—we just think it’s the inevitable place for history to arrive. Of course, we’re going to feel like this catastrophe is the end of our meaning, because we can no longer look for endless accumulation and endless personal aggrandizement and growth as the meaning of life. But we can get more gratification and joy and purpose from casting our lot in with aggregate progress and the kind of consciousness that is the goal of many of the world’s great religions. It doesn’t mean that there isn’t going to be massive suffering and massive pain and death along the way. But there will be purpose, and therefore there will be hope.

Mark Athitakis is a journalist in Phoenix who writes about books for Kirkus, the Washington Post, Los Angeles Times, and elsewhere.