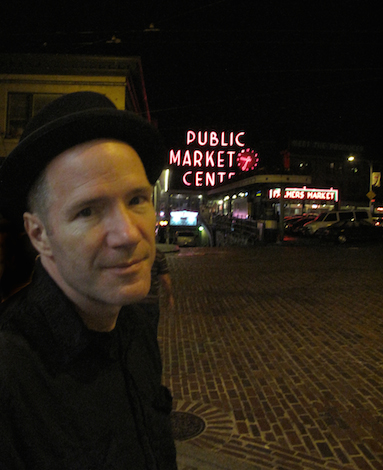 There’s something akin to the lamentations of this song’s persona and to the tragedies suffered by Job found in Rick Moody’s tremendously playful and moving new novel, Hotels of North America. The Nabokovian structure of the novel—it’s written as the first in a series of volumes of online hotel reviews (preface by the Director of the North American Society of Hoteliers and Innkeepers, the collected online hotel reviews by Reginald E. Morse, and an afterword by one Rick Moody)—provides the puzzle pieces to enthrall the reader interested in form. “Nabokov’s Pale Fire was a huge influence on this work,” Moody acknowledges.

Indeed, Moody had been working on a more conventional novel which he abandoned in the writing of Hotels of North America. “I’ve come to realize that literature in the internet age is not traditional; we have an ADHD-style appetite for story,” Moody says. “The Gatsby or Forster approach does not work in our times. Letting go of that traditional approach and picking a structure antithetical to the tradition was important in my writing process for this novel.”

Expanding on this point, Moody invokes the writer Mark Leyner’s observation about the crisis of current literary form and the parallels to musical composition. “A contemporary composer wouldn’t write a sonata as Mozart did,” Moody says. “So it’s equally absurd to expect a contemporary novelist to revert to 18th and 19th century formulas and conventions.”

The novel’s conceit takes the subliterary forms of online writings, in this case hotel reviews, and makes of these reviews a more complicated and moving work than usually appears in the genre. Reginald E. Morse posts reviews on a hotel review website, comments on the responses by readers of his reviews, and so forth. Moody’s novel successfully serves as commentary on these rootless times of social media and virtual relationships while also creating a compelling paean to the need for human connection. Both comic and tragic, Morse is a character who suffers loss after loss.

The hotel review provides Morse with the ostensible means to rate a hotel, but, as with Paul Rudnick’s invented movie critic Libby Gelman-Waxner, Morse’s reviews of  hotel accommodations veer widely and become a series of riffs and commentaries on Morse’s failed marriage, sundered relationships, and economic marginality—a nod by Moody to the realities of contemporary Job-like economic affairs. “Reg Morse,” Moody asserts, “is an example of the post-recessionary middle-class exile from the 21st century economy.”

The “solidly middle-aged” Reginald Edward Morse shares the first and surname initials of his inventor. Moody might also be described as solidly grown into middle age. These doublings began when, as Moody describes it, he had an “a ha moment while staying with my wife in a dismal hotel in Norway. I wanted to write a review of the hotel and then thought: why not write a novel about hotel reviews?” The idea for the content preceded the formalist structure, but as work on the novel progressed, Moody “wanted the book to operate on multiple levels.” Other influences on the novel Moody mentions include Borges and Sebald. Inspired by the world of his novel, Moody has even created a rateyourlodging.com website: “I find art most interesting when it spills out of the containment vessel into the world.”

The writing process of the novel mirrored, in many ways, the novel’s form. Moody was raising a small child whose schedule did not allow him large blocks of time for uninterrupted writing. “I was having to work in 45-minute bursts,” Moody explains. Thus, the novel’s structure, in many ways, as Moody states, “was written out of the very circumstances in which I found myself.”

Morse’s online posts constitute the center of the novel—and its emotional core. Morse’s posts appear in chronological order, even as the hotel stays range over four decades. And for all the structural hijinks of the novel, Hotels of North America is a work of pathos, of loss and longing. It’s a novel that is deeply felt.  The sentences’ sentiments cut and hurt; passages soar and enthrall with their emotional momentum. Morse craves contact and connection. The scenes with his daughter amplify the novel’s emotional core.  Morse’s descriptions of the progression of love by way of how couples sleep together, from “a tangle of limbs” to “a convulsive nap,” sting with comically tragic truth. Yet, love may be the mystic goal, no matter the consequences. In the hardscrabble clawing of this world, when all truths are in doubt, when all identities are

questionable and permeable, Morse argues for love as one veritable truth:  “all conversion experiences are really experiences of love.”

And after the failure of his marriage, after failed affairs, Morse ends up engrossed in one final attempt at a relationship with the mysterious K. The author offers her as a way “to ground both the narrative arc of the story,” as he explains, “and the character of Morse himself.” K. is present in the first post of Morse’s we read, an account that presents a portrait of  economic marginality and slippery ethics, and in the last post, when all is potential possibility and all appears equally lost. The final post is beautifully elegiac—and then there is the afterword, with its cat-and-mouse detective games by Rick Moody. This puzzle parlor game distances the reader from Morse’s language, prose that slices and feelings that pain in their familiarity.

What happens when foreclosures and divorce and unemployment and addictive tendencies coalesce into a perfect storm and lead to a room without a john?    Moody’s protagonist writes extended elegies about the loss of a social center, of home, of love grounded in the ordinariness of time together in a place. Hotels and motels speak to the peripatetic, the consistent go go go, and the rush from one location to another—a dislocation. Home is the daily; hotels are the temporary. Home is grounded; motels are flux. Home is an earth science; hotels are particle physics and algorithms.

Questions of identity abound. How much of Morse’s online persona is authentic and how much invented? How much a construction akin to John Smith’s pitch to prospective New World settlers “to recreate themselves before their own doors”? We know, or think we know, certain details: Morse has been married, has fathered a daughter, has enjoyed and suffered a couple of additional adult relationships, and frequents porn sites—in short, a fairly typical middle-aged male with a “bit of a weight problem and a receding hairline.” With the end of his marriage, Morse is on a peripatetic trip to attempt to reclaim all the Humpty Dumpty fragments of self in this postmodern world. He just can’t put it all together again—not even with all of K’s horses and men.

Like Job, then, Morse keeps his faith: not in God, but rather the possibilities of love. Always the possibility. Even in a B&B. Even in doubt, when life has given you only a sink to piss in.