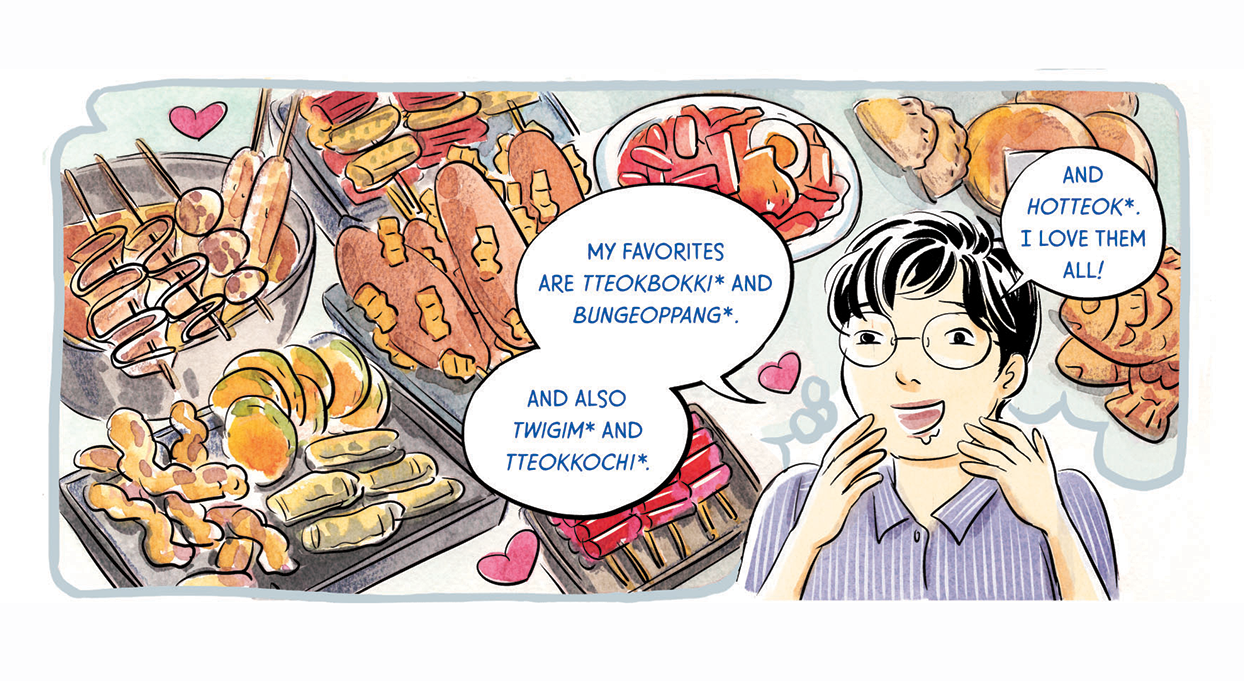 As a visual storyteller and author of the graphic YA memoir Almost American Girl (Balzer + Bray/HarperCollins, Jan. 28), Robin Ha has to think inside the box. “The size of the comic panel is such precious real estate,” she explains in a recent interview, and can’t be crammed with too many pictures, word balloons, or captions. “It has to make sense proportionally.”

For Ha, also the author of the graphic cookbook Cook Korean! the image became everything.

She moved to the United States from South Korea at 14 and, as a “1.5 generation” immigrant—the term Koreans give to those who immigrate during adolescence—she could not speak English. But she could draw. Pictures became Ha’s first fluent mode of communication and, later, of friendship. Almost American Girl chronicles Ha’s alienation as a teen immigrant in Alabama. She endures lunchtime taunts (a male classmate, under the pretense of an “English lesson,” gets her to repeat, “I…eat…shit”); snoozeworthy algebra lessons (surprise, surprise: America is woefully behind Korea in math education); and the foreignness of a ham-and-cheese sandwich. Teachers spout chicken-scratch speech bubbles, reminiscent of the adults in “Peanuts” with their muffled mwa-mwa-mwa’s. Through Ha’s deft hand, the familiar is rendered unfamiliar, and readers experience her profound cultural and geographic disorientation.

To “blend in” to her new American life, Ha is urged to choose an American name. “Robin” is picked from a list of gender-neutral names not through deliberation but by the eeny, meeny, miny, mo method. In a tragic irony, her finger lands on a name with an impossible pronunciation—there is no “R” sound in the Korean language. So an anxious Ha stays up all night rehearsing her new name.

Yet the act of self-naming also becomes an empowering one. Her Korean name, Chuna, is old-fashioned, “the equivalent” of “Bertha or Myrtle,” Ha writes, and choosing an American name is a chance to start over. Her stodgy name is not the only thing Ha is eager to shed from her old life. Back in Korea, Ha and her mother—who never wed Ha’s biological father—experienced a different kind of prejudice.

“In Korea, it is common for single mothers to be disowned by their family,” Ha writes. “No matter how hard Mom worked, she couldn’t change how society viewed her.” In a country where children could only be legally registered under their father’s name—the law has since changed for those born after 1998—to be fatherless was a stigma. Teachers punished her harshly. Parents urged their kids not to play with “a tramp’s daughter.”

The rigidity of Korean society was too much to bear, and Ha’s mother longed to pursue the American dream. “Our culture is very old. It’s basically founded in Confucian philosophy of women serving men, and it’s deeply ingrained in our psyche,” Ha explains. “If I could be ‘woke’ in Korea as much as I am in America, I don’t think I could stay there. I think it’d be just way too much discomfort and frustration. It would be too much to say, This is OK and I can just go along.”

The Korean scenes are rendered in sepia tones—a clever strategy to signal a shift into the past. “As a cartoonist, there are many, many tools that can basically signal to the reader what’s going on,” says Ha. “Color is a big one.”

The Korean rights to Almost American Girl have been sold, and Ha is excited for its publication in South Korea. “I think it’s a good sign that they have seen what good it can do in Korea if it were read by feminists and people thinking about these issues,” she says. A way to push them to think outside the box, if you will.

Patricia Park, author of the novel Re Jane, is a professor in the MFA Program at American University and writes for the New York Times, the Guardian, and others.