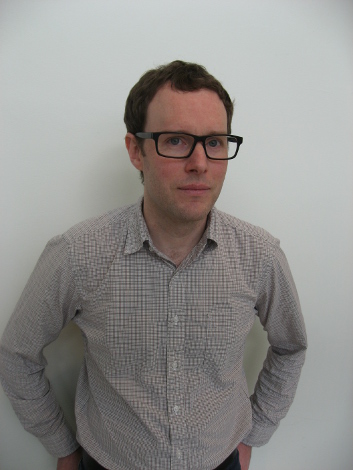 A few years ago, Roger White made an unusual decision for a painter. He took a break from contributing to the contemporary art world to explore the way it works. “Painting is a lot of hours in a room by yourself doing one thing; writing was a way to grapple with the art of my colleagues,” he says. In order to have an outlet to do the kind of in-depth writing about contemporary art to which he aspired, he co-founded the art journal Paper Monument in 2007. A couple of years later he decided to take his foray into nonfiction a step further with his first book The Contemporaries: Travels in the 21st Century Art World. The great thing about artists, he says, is that they’re willing to try out something that they have no idea how to do: “I was approaching interviews like, ‘I don’t know, should I get a tape recorder?’ ” But eventually, White developed a “bumbling” interview style and a fly-on-the-wall narrative persona that allowed him to settle into his writing.

In The Contemporaries, White magnifies issues that both vex and stimulate the contemporary art world and seem to perplex everyone outside it. He begins with field notes on the student examinations at Rhode Island School of Design, which allows him to introduce a question that persists through the later sections on art fairs, studio assistants, and his profiles of three contemporary artists. How do contemporary artists talk about art and does it make any sense outside their specific milieu? White elaborates: “It’s such a strange language and such a unique situation, what would it sound like to someone who wasn’t in the room? Would it sound like we were just talking gibberish?”

White methodically and minutely sketches out interactions between the artists he profiles like Dana Schutz and Mary Walling Blackburn and their art. This is admirable in a way—White spent years hanging around some of his subjects and the extent of his reporting shows. But one of the things about White’s book that struck me as unusual is that he steers clear of commenting on the art world he’s depicting. When I asked him about it he responded: “An art critic is someone who has an opinion about everything and historically wants art to go a certain way. I’ve never really identified with that role.” He’s an insider, and he believes this gives him a special advantage in examining the industry. He could, as he puts it, “talk shop” with his subjects. He explains that the social dynamic of the studio visit—when artists invite critics, journalists or other artists to their studios to check out their work—is much different between artists than between an artist and a critic. There’s less pressure between artists, he says. From first-hand experience he knows that when a curator or critic is over at his studio he feels like he’s performing. “To the extent that I could I wanted to make it intimate, more casual feeling around those conversations,” he says.

One pitfall that could arise when interviewing an artist, especially a performance artist, is that she might try to turn your interview into her art piece. This happened to White when he interviewed the “very wily” Mary Walling Blackburn. There were similar problems pinning down Stephen Kaltenbach, whose art, White explains, “involves obfuscation and misdirection and being a little bit fuzzy about the truth.” As White points out, fact-checking is perhaps the real art with subjects like these. In the book's later chapters, the artist profiles, you realize that you are not going to get a skeptical reporter perspective with White. He’s not trying to get underneath the stories that the artists tell about themselves. Rather, he runs with the current of their tales, their art, coaxing the reader to come along with him.

The same can be said about the book as a whole. You won’t get an expose about art school, art fair or art superstars, but The Contemporaries will stimulate your curiosity about the nature of contemporary art: what it is and isn’t, and where it might be heading. White found that writing the book had a reviving effect on his art now that he’s gone back to it. He was impressed with the way his artist subjects had made peace with the open-ended nature of their art. “To be confident and take what you’re doing absolutely seriously at the same time that you let it be experimental—that combination is great for everybody,” he says. “When I got back to the studio, I felt like it’s ok that I don’t know what I want to do next, but I believe in it, so we’re good. I hope that’s not too abstract.”

Alexia Nader is a writer living in San Francisco and a senior editor of The Brooklyn Quarterly.