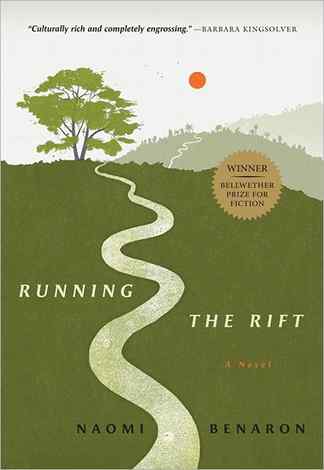 An award-winning fiction writer and poet, Naomi Benaron’s debut novel Running the Rift won the Bellwether Prize for fiction. Set in Rwanda—a country that Benaron says she felt a strong connection to upon first sight—the story follows Jean Patrick Nkuba and his dream of one day running in the Olympics.

Here the author discusses the inspiration for her novel and her connection to central character whose desire to achieve greatness is set against the backdrop of the Rwandan conflict.

Was there a defining moment when you knew you had to write this book?

There were several, actually, but one of the most vivid occurred on my first visit to Rwanda in 2002, when I was walking on the shores of Lake Kivu and my foot hit something hard. I bent down to see what it was.

It was a sacrum, and initially I thought it belonged to a cow, but then I realized it was human. When I bent down, I saw that there were bones everywhere: skull fragments, long bones, teeth. That was the moment when I knew I would have to write about the genocide. I would have to tell the story of the bones.

Your main character, Jean Patrick, is an Olympic-caliber runner, and you write vividly about running here. Tell me about that connection.

Because Jean Patrick comes from this different culture, to make him a person I could know, I made him a runner because that’s something I understand, pushing and pushing until you want to die. I could also make him scientist—that transcends culture; and love transcends cultures. So I could make him someone I know and understand.

I also get some of my best ideas and lines running.  If I get stuck, I say, “I’ve gotta go for a run.” It’s being in the zone, especially when you’re working hard. You let down all those barriers between the different parts of your brain and things really come out.

But how do you keep the ideas that come to you when you’re running?

I carry a cell phone, and I call myself and leave a voice mail. Sometimes I think if anything ever happened to me, those would be some really weird messages to listen to!

You’ve lived a varied life—as a seaman, a geophysicist, a triathlete, women’s advocate. How does this variety play into your writing?

It allows me to tap into very different parts of the human soul. And to sympathize and empathize with very different types of people. When I am writing short stories these things just pop out into my stories, and I have a lot of science in my poems. I have written a sonnet about Planck’s constant. Science is very important in all my writing. Science is the ultimate form of poetry—elegant and tersely beautiful. It pulls an order out of what seems to be the chaos of the world.

Can you tell me how your poetry writing affects your prose writing process?

I start my writing day by reading poetry to get me in that mindset. I have a tendency to write my novels like a 400-page prose poem—a tedious, lengthy process that often doesn’t work and can take you away from flow of your writing.

But when it does work, it is a visceral feeling, and when I have a poem inside me it’s very visceral…when writing prose, that’s what I’d call being in the zone. I don’t feel it all the time, but when I do have it, that’s the best, and I know when I write those pages, I won’t have to edit so much.

Writing about another culture’s conflict is a huge responsibility. Did it ever cause writer’s block?

I recently attended a conference on genocide in Sacramento, and I wanted to say, “Stop. I can’t publish this book.” My talk was called, “Pitfalls of Appropriation: Rights and Responsibilities When Writing Fiction.” It’s hugely charged territory, a culture of victims and survivorship. In this paper I tried to wrestle with that. And the conclusion that I have come to is this: Not only do I have the right, but the responsibility to write about this. What gives me that is that the voices of the direct survivors—in fiction—are not here [in the U.S.]. Some people don't know Rwanda is a country, and some presidential candidates don't know that Africa is not a country.