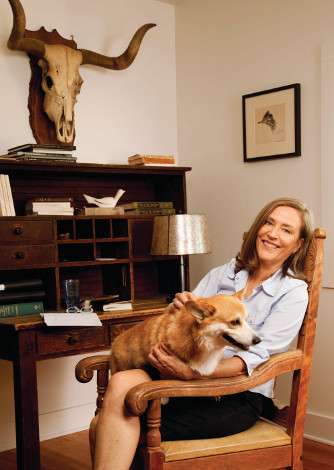 The idea for Sarah Bird’s latest novel, Above the East China Sea, was inspired years ago—even if Bird didn’t know it at the time. She was in Okinawa, the Japanese island with a heavy American military presence, when she was 18 and her family visited the island’s tourist sites, “with absolutely no comprehension of what they meant or the history behind them,” Bird says. “I had that experience that both my characters have, of standing at the top of Suicide Cliff and feeling the breeze from the East China Sea lift the hair off my sweaty neck.” She knew the cliff’s name, but not its history: In WWII, hundreds of Okinawans had committed suicide there, “the majority of them women who had been propagandized by the Japanese who said they were all going to be raped and have unspeakable things done to them” by American soldiers, Bird explains.

That part of Okinawa’s history was revealed to Bird as she researched her novel The Yokota Officers Club, published in 2001. Since then, she says, “I always knew I wanted to write the story, and in particular the story of the Princess Lily Girls.” The girls were a group of hundreds of high school students recruited on short notice to work as nurses in military hospitals. “I was so captivated by that story and so dismayed that it was so little known in America,” Bird says. “I’m shocked at how little Americans in general know about Okinawa, considering the Pentagon has essentially controlled that lovely chain of islands since the end of WWII. So I felt I had an obligation, and I also had a tremendous belief in the power of that story.”

Bird’s novel braids past and present through two narrators: One present-day, teenaged military brat named Luz, and one 15-year-old Okinawan girl named Tamiko whose suicide opens her narrative, and who keeps talking from the afterlife. Just how to tell Tamiko’s side of the story was one of Bird’s biggest challenges.

“I did pretty much an entire novel that was all from the brat’s point of view, and she finds Tamiko’s journals and reads them,” Bird says. “It just didn’t work. I didn’t want to write a historical novel, I didn’t want to write something that readers could read and then put on a shelf and say, ‘This is over and done with.’ I wanted to convey this very strong reality that history is never in the past, that we are all constantly walking through history, and that especially in Okinawa, history is extremely alive.”

So she started writing a second first-person narrator, who became Tamiko. It took some time to figure out how to enmesh the girls’ stories. “That actually didn’t come to me until I was very far along in the writing,” Bird says. And it also took care to render Tamiko as whole and real, despite being dead. “I also didn’t want to write a ghost story,” Bird explains, “because the afterlife is such a real and living thing in the Okinawan culture.”

Bird didn’t return to Okinawa to research the novel, in part because she wanted to preserve her own childhood memories as they stood, but she did dive into the island’s history and present. “I just love spending months in the library and then letting it pour out, and having tons of research and then putting it all aside and writing it.”

She even found a YouTube channel called Planet Oki, where young hip hop artists regularly posted. The channel was the perfect undercover research: “I got to see how they dressed, and how they talked with each other, [when they were] mostly drunk.”

But Bird admits that her habit of “going to graduate school” on whatever fascinates her has hurt her writing in the past. “I did that in The Flamenco Academy: Flamenco purists are such buffs; I had to get every last detail right. And I ended up going way too far down the rabbit hole. I did exactly what I say I hate, which is a giant download of history that I found fascinating but that wasn’t. I learned in that book the feeling of when it is time to just deliver story. Your nine months are up, you’ve finished gestating, and now it’s time to deliver the damn thing.”

Bird says she felt called to tell this story, even as she half-wished someone else would tell it first. “With this book, I was just burdened by wanting to be sensitive to the culture and represent it in a way Okinawans would feel was accurate.”

And that accuracy required detail, too: “This is a world not known to Americans,” Bird says. “You have to world-build, like in a fantasy novel: You have to set up rules, you have to show the customs, you have to describe the people and the landscape. And in this case, I had another layer of added difficulty because I also had to explain the rules of the afterlife, which are extremely important.”

The result of all of Bird’s preparation is a novel told in a compelling, assured voice—and a story with a formidable sense of history.

Jaime Netzer is a fiction writer living in Austin. Her stories have been published in Parcel, Human Parts and Twelve Stories and are forthcoming in Black Warrior Review. Find her on Twitter @jaimenetzer.
MORE FEATURES
POPULAR KIRKUS STARS