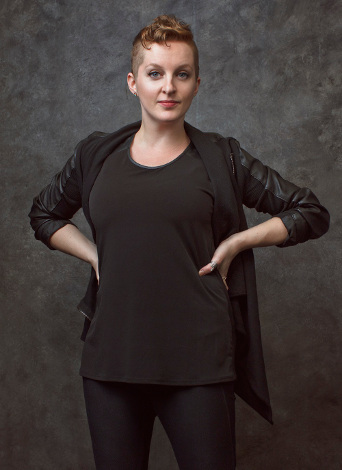 At the Osthorne Academy for Young Mages, the elite private high school at the heart of debut novelist Sarah Gailey's Magic for Liars, there's offensive graffiti on the school lockers, secret notes encoded with spellwork...and a beloved teacher dead in the school library.

Ivy Gamble, a hard-drinking private eye with a chip on her shoulder, takes on the case. Unlike everyone else at Osthorne—including her estranged twin sister, Tabitha—Ivy possesses not a single spark of magic.

While other fantasy series follow powerful wizards as they come of age, Gailey was more interested in how Ivy, who has no power at all, might fare in a world where she's at a strategic disadvantage—and where being an outsider stirs up even more emotional turmoil.

“One of the most interesting things about her is that she's an incredibly lonely woman, which we don't get a ton of in media,” says Gailey of the novel's narrator, a high-functioning alcoholic who fumbles relationships with the men she fancies.

Ivy is “so lonely that she’s able to construct this entire lie about her life without anyone calling her on it,” Gailey continues. They note how Ivy’s privilege as a white woman allows her to nose-dive into alcoholism without interference from friends or family. “There's no one to catch her if she falls,” they add.

Gailey credits Killing Eve, the BBC television series about an MI5 agent tracking an international assassin, as an influence. It’s one of the few shows that portrays complicated women who make bad decisions without judging characters for their behavior, they say. Gailey's background as a trained actor helped them better understand their characters in this way, too.

Still, it wasn't always easy for Gailey to push Ivy to her limits. Gailey initially wanted to give Ivy a close friend for emotional support, a figure they liken to “Chris Hemsworth in Ghostbusters,” but was persuaded by their editor to make Ivy's story darker. "I was scared for a time of writing that way because I was going through a divorce and dealing with my own loneliness,” they add.

But Gailey also found “relief” in the story's emotional messiness, from Ivy's alcoholism and disastrous personal life to the teens who struggle with bullying, finals week, and an all-consuming "Chosen One" prophecy. Instead of an athletic, popular Harry Potter figure or a nerdy fanboy like Quentin Coldwater, Gailey offers different possibilities for the "Chosen One" in Magic for Liars: obsessive Dylan DeCambray and his domineering half sister, the ultrapopular Alexandria. The siblings, not coincidentally, become prime suspects in Ivy's murder investigation.

"I wanted to poke a little hole in the idea that this archetype of a boy is going to be the ‘Chosen One,’ " Gailey continues. "These girls are also extremely powerful and focused in the way that you want your ‘Chosen One’ to be."

Everything in Dylan's culture and upbringing "tells him that he's the ‘Chosen One,’ " Gailey continues. In contrast, Alexandria is more interested in things that society codes as feminine. "She's interested in being pretty; she's interested in social control. She's extremely powerful at all of those things but in a way that we don't often acknowledge as powerful."

Gailey's ability to portray the inner lives of teenagers—their cliquish behavior, their penchant for secrets, and their quest for power over their lives—is part of what makes Magic for Liars so compelling, and they treat the thorny relationships between adult women in much the same way.

"All of them are still trying to figure out who they are to each other because none of the stories they've ever seen fit the people they are inside," says Gailey of the novel's female characters.

This is an internal struggle Gailey identifies with and one they thought about often while writing. "Though not all of the characters are queer on the page, that concept of trying on identities is a very queer concept," they continue.

"There's this constant feeling of trying to find the thing that fits best in terms of identity," says Gailey, who identifies as nonbinary. "It's not a matter of

Gailey wants to give their characters the space they need for self-discovery by creating a world that normalizes queerness from the first sentence. "As a queer person, I want to build books that have worlds where queerness is allowed and it's part of people's communities," they say. "I don't want to keep on having those conversations of, like, 'Why do you use they/them pronouns? What does that mean?' I just want to read a world where they/them pronouns exist and it's fine."