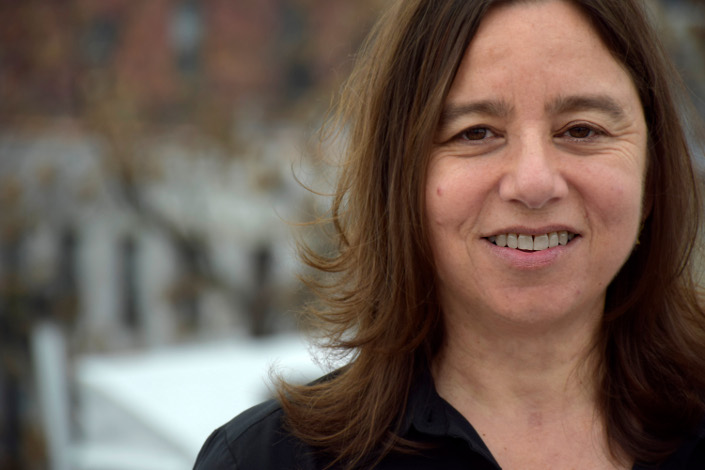 The Cosmopolitans may very well be Sarah Schulman’s breakout book—an idea that the author finds not without a trace of humor.

“It’s funny, isn’t it? I’ve been around for so many years,” says Schulman, 57. “If you Google ‘underrated’ and my name, you’ll get a lot of hits... I’m always getting ‘best unknown book’ and things like that—and it’s because of the queer content.”

Schulman is the author of 10 novels (After Delores, Rat Bohemia, Shimmer, etc.), five works of nonfiction (Stagestruck: Theater, AIDS, and the Marketing of Gay America, Israel/Palestine and the Queer International, etc.) and four plays (Mercy, etc.) that have won her numerous fellowships, residencies, and awards. She is a distinguished professor of the humanities at the College of Staten Island and a lifelong lesbian and gay rights activist.

“I’ve been writing books with queer content, but also with queer perspectives, for 30 years,” she says, “and it really hasn’t mattered how well-written they were, how innovative they were, how much their readers loved them. It’s just that that perspective meant the books were kept out of the mainstream, even when they were published by the mainstream. So I’m hoping that we’ve come to a time when that’s not going to be necessarily true.”

According to The Cosmopolitans’ starred review, the time has come: “Jarring and beautiful, this is a modern classic,” Kirkus writes. Written in response to two iconic realist novels, Honoré de Balzac’s Cousin Bette and James Baldwin’s Another Country, The Cosmopolitans is, among many things, a story of friendship. Earl, a black, gay actor, and Bette, a white, spinster secretary, are neighbors in a Greenwich Village apartment building in 1958. They are each other’s chosen family, supporting one another through life’s hurts and successes, since Bette arrived from Ohio, disgraced, 30 years prior.

“Over time, Earl and Bette came to the understanding that they shared a fatal flaw, one that set them apart from other people,” Schulman writes. “They could both love completely, only once. It was a curse and yet a fact, and this is what had brought them to each other, this recognition. The one grace bestowed. In this particular emotional state, neither of them would ever be alone.”

But the surprise appearance of a biological family member—Hortense, a young, rich, aspiring-actress cousin of Bette’s—threatens their friendship in unforetold ways. When Earl breaks off contact for the first time in their long acquaintance, Bette sees it as a call to arms.

“If she did not act boldly and with command on her own behalf, she would perish and yet still live,” she writes. “That was the fear, that this terrible nonlife could go on forever until the end. Thus the challenge that her beloved Earl had brought into her lap, the problem that he had created for her to solve.”

Under the influence of Valerie, a consultant hired to bring Bette’s old-school advertising agency into the modern age, Bette harnesses the powers of marketing and psychology to create an opportunity to bring Earl back. Playing to prevalent issues of race and class, her plan walks a fine line between reverence and revenge.

“Bette grapples with racism and how it’s structured,” Schulman says. “Sometimes she exploits racism to get her own way, and sometimes she fights racism, but she doesn’t have a theory of it. She doesn’t understand her role in it. From her point of view—and I’m not endorsing this, nor condemning it; it’s just who she is as a person—she is being blamed for cruelty that Earl has experienced, that she did not cause. He’s experienced racism, he’s experienced homophobia, he’s experienced all of these things that she’s never experienced, and yet he’s taking it out on her. So she simultaneously has compassion for that but wants to override it—and this is her problem, because she doesn't have the tools to override it.”

Set in a vibrantly imagined New York City, a place where, as Schulman writes, “one person’s tragedy is another person’s underscore,” The Cosmopolitans confronts white supremacy and heteronormativity, virtue and opportunism, loneliness and the importance of being seen—and loved—for one’s true self.

“These are not necessarily heroes, these protagonists,” she says. “They’re real people—so that sometimes makes [readers] scratch their heads—but, you know, I’m very hopeful this time around. It’s my turn; let’s put it that way.”