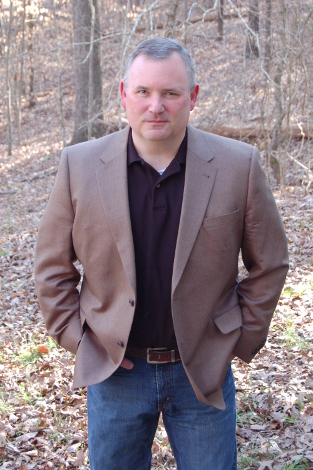 Characters gruesomely murdered and then resurrected, inter-species communication, vicious lions dispatched not to threaten but to protect mankind—such phenomena constitute the reality-defying, genre-bending universe Scott Hawkins creates in his thrilling debut, The Library at Mount Char. At the center of the novel lies the imposing, albeit largely absent figure of a tyrannical, violent leader called Father, whom the Pelapi race—Hawkins’s eerie, almost sorcerous, but still fiercely human protagonists—obey and revere as their post-apocalyptic savior.

For Hawkins, the book blends fantasy and realism to convey the limitations of the human condition. “It was a clash of old-school superstition and modern science,” he says. “I like the idea that human power in general is necessarily finite, in that we’re never going to know everything and it’s a good idea to stay humble about that.

“I think there’s a tendency that a lot of people have to assume that we’re at the top of the food chain for a reason,” he continues, “and I liked tweaking the nose of that idea.”

Father rules over the dominion of the Library, which is a far cry from the institution we typically associate with this term. The Library contains the entire universe within it, organized into a series of catalogs, which each of Father’s subjects is required—often by disturbing physical force—to study manically as his or her lifelong vocation.

Surprisingly, the inspiration for the character of Father wasn’t as black-and-white as you might expect. “I think that Father is beyond judgment,” Hawkins explains. “There are a lot of things he does for which it would be really tough to find a good reason, but at the same time, no one really knows what he was dealing with.”

For almost the entire duration of the novel, indeed until almost the very end, the specter of Father is revealed only second-hand, through the impressions and memories of the people under his authority, and not through direct observation of his presence in the flesh. “It was about creating mental judo for the reader,” Hawkins says. “You can talk about how fearsome somebody is, but if you just leave little hints here and there that point in the direction of the sort of person Father is without actually forcing any particular image of him, the reader does a better job of filling in the gaps.”

The library over which Father rules is both a place of horrific suffering and, paradoxically, profound security. “The library is ultimately a kind of sanctuary for the Pelapi people,” the author reveals. “Most of the characters don’t initially have a comfortable, homey feeling about that library, but by the end of the book, they see the purpose for it and it becomes sheltering and safe.”

recoil in fear of the library Hawkins creates, the institution was actually inspired by the author’s own positive associations with literature. “Books have always been very comforting to me, and this vast library was an ultimate home, as far as I was concerned,” he admits. “That’s my ideal dwelling place.”

Quoting Bram Stoker’s iconic work of gothic fiction Dracula, Hawkins describes his characters’ plight thus: “they have to pass through the bitter waters to reach the sweet.”

The arc of the novel, then—transcending its many bizarre, sensational, heart-pounding, and even a few mentally scarring episodes—is one in which these pseudo-human characters undergo the very human process of personal development and the fostering of an inner strength they didn’t once have. “The characters emotionally adjust to what was once a very hostile environment,” Hawkins explains. “Although the overt events are indeed terrible, the Pelap i people grow to a point where they overcome them, and achieve the power and the peace that comes with having dealt with very traumatic issues.”

And these overt events certainly do take the reader on a wild, imaginative ride that challenges our very notions of objective possibility. Hawkins achieved this feat of reality-distortion by, he confesses, “making plausible reasons for stuff I’d already written without really worrying about plausibility.”

His process, he explains, was a step-by-step composition beginning with not a predetermined overarching direction, but rather with a collection of discrete and independent notions that he then proceeds to fuse into a cohesive whole. “The way I work is I do random scenes, and try to arrange them into some kind of narrative,” he says. “I’ll do anything that strikes me as entertaining—a character sketch, or an action sequence—and I line them up in such a way that a narrative emerges.”

Speaking almost as though he were composing a how-to guide for writing such a mesmerizing tour-de-force as he has, Hawkins instructs: “iterate like that until you have 50,000 words or so, then shuffle things around. Write the connective tissue.”

He completed the task brilliantly, but something tells me it’s not quite as easy as he makes it sound.

Lauren Christensen is an assistant editor at Vanity Fair.