Screener: Tell It to the Bees:

Tell It to the Bees...or save yourself a couple of hours and don't. 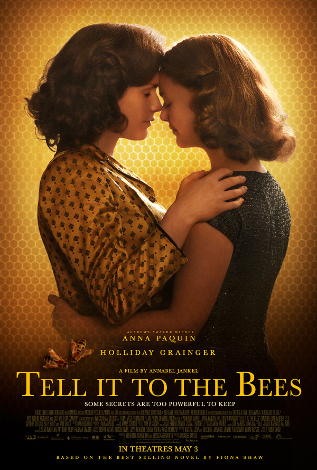 The new movie adaptation of Fiona Shaw’s 2009 novel Tell It to the Bees—directed by Annabel Jankel and starring Anna Paquin and Holliday Grainger—sees a limited American release today. It’s a tale of forbidden love, the magic of childhood, and…bees.

Both book and film tell the story of Lydia Weekes, a factory worker in a small U.K. town in the 1950s, whose husband, Robert, leaves her for another woman. She raises their son, Charlie, alone and struggles to make the rent. After an injury from a fight, Charlie meets a local doctor, Jean Markham, who keeps bees as a hobby. He and Jean quickly hit it off, and the boy assists her in taking care of the aforementioned insects; he also tells them secrets (in an apparent misinterpretation of an old superstition). Soon, Lydia meets Jean, and before long, the two women embark on a secret affair. After Lydia and Charlie are evicted from their home, Jean offers Lydia a housekeeping job, and they all live under the same roof as a family.

Up to this point, the book and movie follow similar courses, although a few details differ. One of the few improvements in Henrietta Ashworth and Jessica Ashworth’s screenplay is that it begins with Lydia and Robert already separated, which doesn’t happen until roughly the midpoint of the novel. Indeed, the book, despite some occasionally overheated prose (“They kissed as if the universe began and ended there”), is a mostly low-key and pleasant affair. The first half of the movie gets this tone perfectly; Paquin and Grainger (who was the highlight of last year’s C.B. Strike TV series) have a wonderful chemistry, and young Gregor Selkirk engagingly gets across the naïveté of youth.

Later, Robert takes custody of Charlie after hearing about Lydia and Jean’s relationship. In the book, it’s handled relatively subtly—Robert’s sister, Pam, overhears Charlie talking about his living situation and reads between the lines. In the film, it’s an out-of-character moment: Charlie accidentally discovers the two women in the midst of an act of love—thanks to a conveniently and improbably unlocked door—screams a homophobic slur that he picked up from a classmate, and runs off to tell Robert and Pam. It makes no sense, though, that he would confide in them; he has no emotional connection to Pam, who’s cold and unpleasant, or his father, who’s a distant, violent, and frankly terrifying personification of toxic masculinity. The idea that this sensitive boy would turn on the two women who truly care about him is simply unbelievable.

After Jean saves the life of Pam’s daughter, who was the victim of a botched abortion, Charlie goes back to live with his mother and the doctor. In the book, Robert willingly lets the boy go, as he never much wanted him, anyway; in the movie, he angrily tries to get him back—and also attempts to rape Lydia. There’s no sexual violence in the book, and it’s hard to comprehend why a filmmaker would feel the need to add it for shock value. (Earlier in the film, Jean remembers when a gang of young men assaulted her girlfriend—another repulsive element that’s not in the text.)

In the film, Lydia is able to escape the assault because—no joke—a swarm of bees flies through the bedroom window. Thankfully, this ridiculous, out-of-left-field spectacle is not in the novel.

As if this weren’t enough, the movie also changes the book’s ending. In the novel, Lydia, Jean, and Charlie leave the closed-minded, gossipy town and go to live together in Italy. By the book’s end, the two women have been living together happily for many years. It’s a deeply satisfying ending; the film goes a different way. In an interview with AfterEllen last October, the director—whose resume includes 1993’s Super Mario Bros. and no known expertise in gay history—said that she changed the ending because, as she saw it, “it felt like it had to be more true to the time.” Apparently, there were no happy lesbian couples in the ’50s. Not one! Not even in the movies!