You get one line of The Hobbit in this movie—and that’s it! 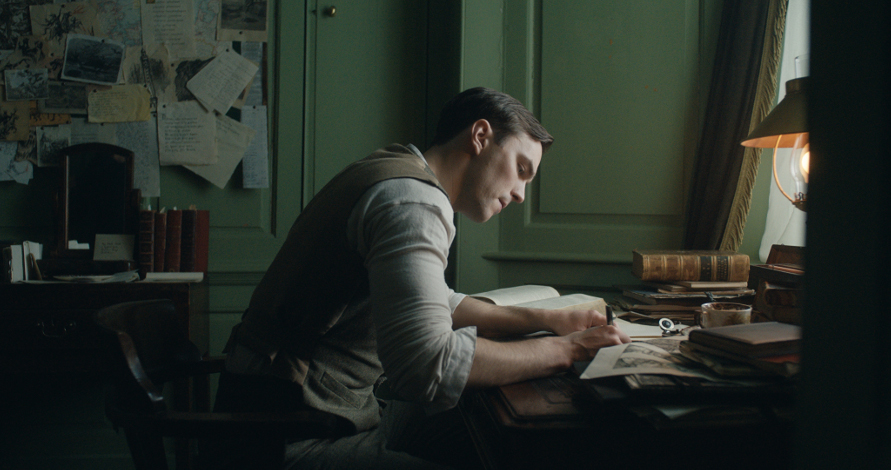 In April, the family and estate of J.R.R. Tolkien, the famed author of The Hobbit and the Lord of the Rings trilogy, released a statement about a new biopic, Tolkien, which will be released on May 10. In it, they say that they “wish to make clear that they did not approve of, authorize or participate in the making of this film. They do not endorse it or its content in any way.” The family hadn’t actually seen the movie, a representative later told The Hollywood Reporter, so they had no specific objections to it. Indeed, the film, which mostly covers Tolkien’s life from his teens to his mid-20s, sticks quite closely to the facts of his life. And they certainly wouldn’t take exception to the depiction of the love story of Tolkien (Nicholas Hoult), and his future wife, Edith Bratt (Lily Collins)—which, as Gabriella Paiella astutely pointed out at The Cut, is extremely chaste.

That’s not to say that there aren’t objectionable moments. Very early on, for instance, a teen Tolkien reacts to an Englishwoman’s disdain for Africa—he was born in the Orange Free State, now part of South Africa, in 1892—by drily noting that he and his brother “hardly ever carry our spears anymore.” Yes, he’s mocking the woman’s provinciality, but he’s also casting native peoples as his inferiors—at the same time. At the very least, it’s a clumsy “joke” for the white son of English colonists to make.

A bit later, when scholarship-student Tolkien and his wealthy school chums are at a teahouse, one of them, on a dare, decides to propose marriage to their waitress, whom they all barely know. An upper-class student asking to marry a serving girl—what jolly fun! One wonders what he would have done if she’d accepted his offer. I’m guessing it wouldn’t have been quite so funny.

The biggest problem with the movie, though, is that Tolkien is only interesting because of what he would do after the events of the film. Hoult is a game and talented actor, but the Tolkien he portrays is little more than a kid who desperately wants to attend the rich boys’ school to pursue his love of philology. One never gets the sense that he’s a man with a truly unique vision. Sure, he likes adventure stories, and later, while feverish in the trenches of World War I, he has a few colorful visions of dragons and horsemen. But one never sees the man who painstakingly drew his own maps of his imagined fantasy world, and who singlehandedly invented much of what we now know as the modern fantasy genre.

The movie, as directed by Finnish director Dome Karukoski, isn’t entirely without merit. It’s beautifully shot in pleasant sepia tones, and some of the acting is quite good. Collins, in an underwritten role, manages to get across Edith Bratt’s deep love of music—and her frustration at never being able to discuss it. And the formidable Derek Jacobi is the highlight of the film as Oxford University professor Joseph Wright, whose passion for languages infects the young Tolkien. But Tolkien’s own passion for conjuring legends, obvious to anyone who’s ever read any of his fiction, is given short shrift.

A wonderful, current exhibit at New York City’s Morgan Library Museum, “Tolkien: Maker of Middle-earth,” reveals far more about the man than this two-hour biopic ever does. And that’s because the movie ends after he writes just one line of The Hobbit. It’s that very creative process that Tolkien’s fans will want to see—and they don’t get it in Tolkien.