We read & watch "The Little Stranger" 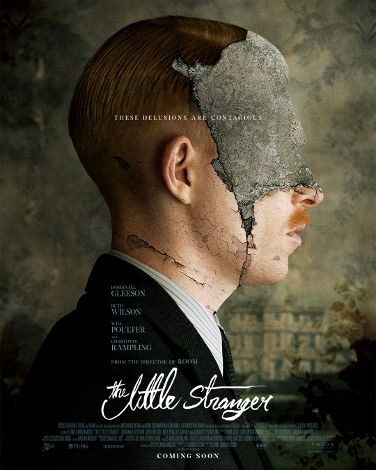 The film version of The Little Stranger, starring Domhnall Gleason and The Affair’s Rita Wilson, arrives in theaters on Aug. 31. It’s based on Sarah Waters’ 2009 novel of the same name, which tells a tale set in Warwickshire, England, in the late 1940s. A local doctor, Faraday, visits a dilapidated estate, Hundreds Hall, to treat a maid. His own mother had once been a servant there, and he’d visited the house in his youth. He becomes acquainted with its current residents, who’ve fallen on hard times. They include injured war veteran Roderick Ayres, whom he later treats, as well; Roderick’s adult sister, Caroline; and their mother. Later, Faraday attends a small party at the estate, where the daughter of a family friend is horribly bitten by the Ayres’ usually sweet-natured dog. Soon after, Roderick tells Faraday that he experienced a supernatural presence in the house the same night—one that moved objects around in his room. The doctor immediately discounts this as a delusion; however, more strange incidents follow, wreaking havoc on the family. Along the way, Faraday and Caroline become closer—before further tragedy strikes.

The movie, directed by Lenny Abrahamson of Room fame, stays true to its source. Few events are entirely omitted, although the film does run through them at a rather brisk pace. At first, this seems like a welcome upgrade; the book takes almost 100 pages, for instance, to get to that shocking dog-bite. It happens fairly early in the film, but the director rushes through it, not allowing its ghastliness to fully register. The choppy editing also obscures the horror of the injury, robbing it of much of its impact. The book describes it in gruesome detail, setting readers on edge for later hauntings.

However, in Waters’ book, the supernatural elements feel like an afterthought—a snappy way to draw an audience into a long examination of aspects of the English class system. Both the book and the film regularly remind readers that Faraday, with his working-class background, feels out of place in an upper-class milieu—even one that’s crumbling away. His occasional interactions with wealthy jerks and poverty-stricken patients provide further opportunities for self-reflection and self-pity. Then, every once in a while, Waters seems to remember that she’s telling a gothic-horror story. There are genuinely scary moments, to be sure, in both the book and film, but only the absolute bare minimum required to put the book into genre territory.

Kirkus’ reviewer also pointed out that narrator Faraday too often hears about major events secondhand, instead of experiencing them himself. The film does try to remedy this, at least, by slightly expanding beyond the doctor’s point of view, which makes certain plot elements feel less ambiguous.

Still, despite Waters’ languor and genre dilettantism, she does show amazing skill at conjuring and sustaining moods. Abrahamson, on the other hand, doesn’t. In the novel, for example, a dance and its immediate aftermath fairly vibrate with passionate intensity; in the movie, these same scenes fly by with blink-and-you-miss-it speed.

Throughout the novel, Waters also paints Caroline with sympathy and subtle detail—to the degree that one wishes that Caroline were narrating the tale instead of the stodgy Faraday, who grows rather unpleasant to spend time with for 500-odd pages. In the film, however, Gleason does a fine job with this truly unlikable character, deftly making use of Faraday’s limited emotional palette, and Wilson similarly depicts Caroline’s anxiety and exhaustion with impressive verve. It would have been nice, though, if the actors—and the story’s horror elements—had a bit more room to breathe.

David Rapp is the senior Indie editor. The image above of Domhnall Gleeson as Dr. Faraday in The Little Stranger is courtesy of Nicola Dove/Focus Features.