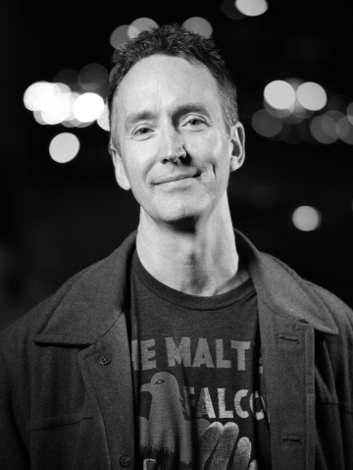 I confess: S.G. Browne is so funny that he once made me disrupt an entire hospital emergency room. I was in the waiting room reading Browne’s debut novel Breathers (2009), a romantic comedy about zombies. When I hit the line “Is it necrophilia if we’re both dead?” I burst out laughing, disturbing every poor soul around me. (Note: the author of Breathers is rather proud of this achievement.)

Since then, Browne has published three more well-received and equally bizarre comedies including Fated (2010), which earned the Kirkus star; the funky paranormal detective novel Lucky Bastard (2012); and the celebrity-skewering satire Big Egos (2013). This week, Browne returned with Less Than Hero, which takes the notion of comic book superheroes and flips its inherent iconography to serve Browne’s twisted sense of humor.

Our narrator is Lloyd Prescott, whose lack of ambition has led him to making his living by working as a professional guinea pig for pharmaceutical companies, testing drugs for Phase 1 clinical trials and occasionally panhandling. He’s more or less settled into domesticity with his girlfriend Sophie, who manages a supermarket and busks as a glitter-toting fairy in Manhattan’s Central Park. When Lloyd and his oddball buddies start manifesting strange powers, they decide to put them to use fighting crime and battling supervillains.

“I read about these people who make their living testing drugs,” says Scott G. Browne from his home in San Francisco. “I had never really written a superhero story and I thought it would be fun to have all these misfits who are suddenly gifted with superpowers. If I were to say what my inspirations are for Less Than Hero, it’s Mystery Men meets Unbreakable. Mystery Men is just a lot of fun. I wasn’t trying to emulate the dialogue but I loved the banter between them and the fact that they were normal people with unusual talents trying to make a difference. In Unbreakable, you have the idea of a man who spent his entire life not knowing that he was extraordinary. There are also some nods to The X-Men in there.”

When Browne says his own characters’ powers are strange, he’s not kidding. Lloyd reimagines himself as “Dr. Lullaby,” who makes others fall asleep. His buddies exhibit other powers, foisting side effects like rashes, weight gain, nausea, and hallucinations on their targets, not to mention the poor guy whose role as “Professor Priapism” is to broadcast unexpected erections. Fans of Browne’s earlier works should also note that the author has liberally seeded his new novel with subtle Easter eggs that point back to Fated.

One of the book’s charms is that Browne never fully geeks out over his superheroic scenario. I note that had I written something like Less Than Hero, it would sound like the middle third of Clerks with superheroes instead of Star Wars.

“To be honest, I didn’t grow up on superheroes at all,” he says. “I never read comic books at all. I was a fan of superheroes on television, like Super Friends and Batman with Adam West and Burt Ward. My first real superhero geek-out moment was Superman in 1978 with Christopher Reeve, which I still think is the best superhero film. But that also means I come to the movies with a completely different point of view. Because I don’t have any expectations as to what a movie experience is going to be, I’m not going to be disappointed if they don’t bring in everything from the comic books.”

It’s been revealing to watch Browne’s work evolve as he mines humor from a wide variety of genres. He toiled for years on horror novels that got some fringe attention but were never published. But the work just wasn’t ringing his bell, so he walked away from the keyboard for a while until he wrote a short story called “A Zombie’s Lament,” which gradually evolved into Breathers. I was curious what inspired him to shift from horror to humor.

“Stephen King was my first inspiration,” he admits. “He was the one who made me realize I wanted to be a writer. But then I read Lullaby by Chuck Palahniuk. That novel made me realize that I could do a lot more with my writing than the straight supernatural horror I had been writing when I first started out. I wrote three novels before Breathers and they’re all straight-up horror novels. There might be some comic beats in them but there’s no black humor or social satire at all. I discovered that I enjoyed writing dark comedy and social satire with some supernatural elements a lot more.”

In looking back over the sum of Browne’s published works, it quickly becomes apparent that all of his books are about heroic arcs—the hero’s journey to become someone better than they were before.

“When I was writing Breathers, I think it finally clicked when I realized I was writing about characters trying to find their purpose in a society in which they have no purpose,” Browne says. “I knew Big Egos was about what happens to your sense of self when you’re constantly pretending to be someone else. It was really about finding out what your role is in this life. I’m sure it’s possible I’m trying to figure out just what the hell it is I’m doing. But here’s the thing: no one has it figured out. Everyone is Indiana Jones—we’re all trying to figure it out as we go along. Everyone thinks they know what they’re doing until something blindsides them or they figure out they were doing it all wrong. So I think there’s a lot of that in my books: finding your purpose, your meaning, what it is you’re supposed to be doing. It’s not something I set out to do but it came through very clearly in Big Egos and that idea immediately came into play in Less Than Hero as well.”