We talk with Michael Macomber, Co-owner of Elements 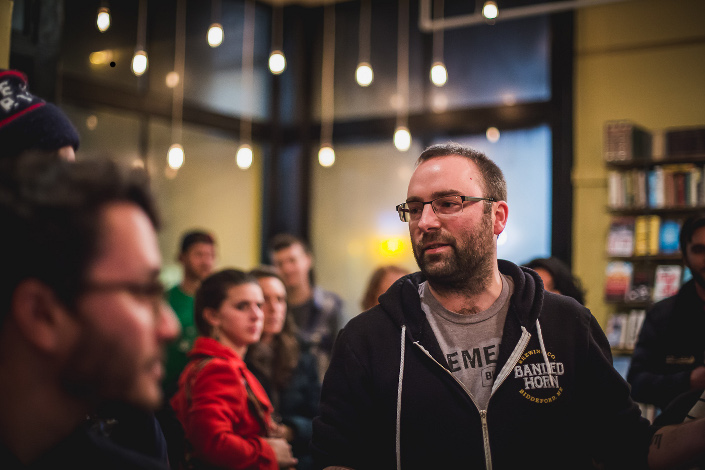 Five years ago, Biddeford, Maine, which had no coffee house, pub, or bookstore, got all that and more when Elements: Books Coffee Beer opened. The primarily used and remaindered bookstore is also a music venue, meeting space, study spot, and gallery. “When thinking of opening a bookstore, I was cautioned by friends and colleagues that I should avoid selecting titles that were too intellectual,” says co-owner Michael Macomber. “Well, I completely ignored that advice, and I’m glad that I did.” Here, Macomber talks about inspired book-and-beer pairings, among other essential combinations.

How would you describe Elements to the uninitiated?
Elements is a hybrid bookstore, coffee shop, and craft beer bar, with live music on the weekends. Essentially, Elements is four shops in one. The books are as carefully curated as the space allows. I personally enjoy dusty, floor-to-ceiling stacked bookstores; however, I make a concerted effort to keep Elements free of clutter and allow a significant amount of books to be displayed and integrated seamlessly with the cafe.

Which was your favorite event and/or most memorable disaster?
By far my favorite event was for our second anniversary. We collaborated with some of our favorite local breweries to make 10 unique beers. Many had literary or science-based themes to go along with our shop’s concept. We’ve had surprisingly few disasters here, but we’ve had a number of interesting events, including a panel discussion with a local burlesque troupe; a stop on the tour of the band called the Walking Guys, who were on their way to Georgia by foot; pop-up performances from our local community theater; countless incredible local musicians; a philosophical panel discussion on the Boston Red Sox; and two wedding receptions for some of our close friends.

Books, coffee, and beer. How did you decide on this brilliant combination?
The decision was primarily based out of need. When we opened five years ago this March, the downtown Saco/Biddeford area (where I was born and raised) had no coffee shop, no bookstore, and no craft beer bar. These were all things that I was craving since returning home from New York City. The idea of combining a bookstore and coffee shop sprung out of my time working as a manager at Housing Works Used Book Cafe in NYC. The combination of coffee shop, bar, and music venue was a result of my frequenting the Tea Lounge in Park Slope, Brooklyn. The idea was to be able to provide the highest quality books, coffee, and beer all in one spot.

What trends are you noticing among young readers?
The trends I’m seeing are primarily with local Maine-themed board and picture books. Islandport Press in Yarmouth, Maine, has an incredible catalog, including Halfway Wild by Laura Freudig, illustrated by Kevin M. Barry, and The Old Mainer and the Sea by Jean Flahive, illustrated by Mari Dieumegard, as well as a number of titles by Maine painter Dahlov Ipcar, especially the board book Dahlov Ipcar’s Maine Alphabet.

What is your favorite book and beer pairing?
We’ve got an ongoing series on our Instagram page called #bookandbeerseries, where I post a photo of a book and a corresponding beer, along with a small write-up. By far my favorite of that series is the book Tom Waits on Tom Waits: Interviews and Encounters paired with a beer from Tributary Brewing in Kittery, Maine, called Wee Heavy. The caption reads: “Wee Heavy from @tributarybrewing is a well-balanced, malt-forward strong ale with a hint of smokiness. Tom Waits is a perfect blend of raspy growls and guttural tones with an insane amount of smokiness.”