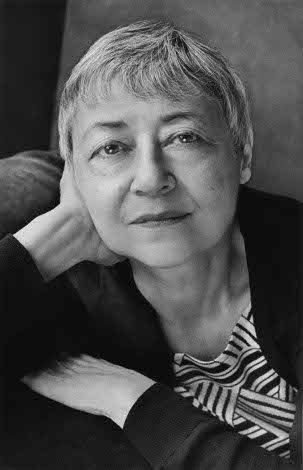 “I don’t really believe in closure,” says Sigrid Nunez as she reflects on her latest novel, The Friend. In fact, “I didn’t really need for there to be closure” in the book, she says. It’s a surprising thing to hear, not only because the book’s narrator seems to search everywhere for meaning after the sudden death of her friend, but also because the novel ends in beautiful completion, a full circle of sorts.

But a circle, though closed, is also unending. The Friend tells a story about the physical, emotional, and intellectual work of continuing to live in the face of loss. Through an intimate and unnamed first-person narrator—who, Nunez says, shares many of her own struggles—The Friend illuminates the strategies one draws on to cope and move through deep grief. The novel opens right after the narrator learns that her writing mentor, a close friend, has committed suicide. Because the mentor’s widow (and third wife) does not want to keep her late husband’s Great Dane, she convinces the narrator to overlook the real threat of losing her no-dogs-allowed, rent-controlled apartment in New York City and adopt Apollo. Together, the narrator and Apollo suffer the loss of their mutual friend.

I ask Nunez if The Friend provides a model for overcoming loss, if the book implicitly endorses moving with someone in the process of moving through and, eventually, on. “I don’t think the relationship with Apollo fixes things any more than the therapy,” she says; “nothing is really helping, [but] in helping the dog, in being good to the dog, in doing the right thing by the dog, I think that in itself did a certain amount of healing.” Is there something about the creatureliness of the dog that aids the narrator’s mourning, I ask. Nunez notes the dog’s silence and muteness, but then pivots to assert, “They really are a different species. I don’t think we really have any idea what is going on in their heads.” We breed dogs to comfort us, for example, but they don’t know why we suffer. “Our unhappiness must look so strange to them,” she says. “You have your food, you can do whatever you want…is that troubling to the dog that he can’t figure out” what ails you?

It is this way that Nunez has of observing the human-canine relationship with curiosity and open-endedness that she brings also to her writing.The novel’s first epigraphis a quote by Natalia Ginzburg (“You have to realize that you cannot hope to console yourself for your grief by writing”). “I believe her quote,” Nunez says. “Writing doesn’t want you to think, I am here to help you get through. Writing doesn’t want to know from you. You can’t think, I am suffering, I will write and then that will be healthy.” She wonders about the notion that writing and publishing yield happiness and asks me to consider the number of writers who are depressed, alcoholics, suicidal. And yet, Nunez points out, “if some writers didn’t write, they would be in serious trouble.” For Virginia Woolf, for example, Nunez and her narrator attest that writing was not only therapeutic but also brought great joy.

In The Friend, Nunez inhabits some of life’s most complicated experiences—suicide, loss, interspecies friendship, and writing—and resists explanations that might make them easier but would also not do them justice. Sometimes directly addressed in the novel, and more often implicit, is the sexualized power dynamic between mentor and mentee. Twice The Friend’s narrator notes that her mentor, while living, “left trails of weeping

But regardless of the complexity she notes in the mentor-mentee dynamic, Nunez is clear that she does not want to be a mentor herself: “Maybe I just don’t want that power over an artist, over people who are just coming into their art.” She might feel differently if she had had different mentor relationships, she says; in that department, she’s “had a lot of disappointments.” But Nunez is still a teacher (currently, at Boston University) and she ends our talk with a teaching: “Don’t flinch,” she says. “Life is difficult and complicated and writing is hard; you have to tell the truth. You have to face certain things. You should go there, wherever it is, wherever it’s taking you.”

Brianna Jewell is a writer living in New York City.