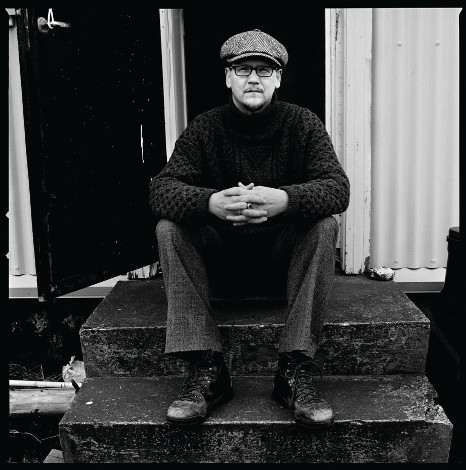 The dramatic circumstances surrounding Iceland’s independence seem to have been carefully conjured up to pay poetic tribute to the history of the island-nation, the land of Vikings and sagas, the sparsely-populated country that traverses the year first in perpetual darkness and then in unending light. In October of 1918, the Katla Volcano erupted for the first time in half a century, and the sky filled with fire and ash. By the end of that month, the Spanish influenza had arrived in Reykjavik, and it was just a matter of weeks before the conflagration had torn through the country, leaving a devastating toll. On December 1, a royal retinue arrived from Denmark to formally grant Iceland its independence, and more than seven centuries of foreign rule came to an end. Amid all this death and rebirth, the teenage Máni Steinn was selling himself to men throughout the capital city—that is, at least according to Sjón, in his highly anticipated new novel, Moonstone: The Boy Who Never Was.

“It was really irresistible to me as an author,” Sjón explains, “those plague ridden, dark days. It’s a time that begins with the volcanic eruption and ends with our sovereignty. I had for quite a while been looking for a story to take place in that setting, and for a character that could carry us through those days. One of the first things that I realized was that the character had to be an outsider, because, obviously, if you're caught up in the epidemic, if your family is dying, you simply become speechless, and that’s not a good protagonist for a book. And early on, I got the idea that this was a character that somehow, for some reason, would be sexually active. He would be someone doing things that he should not have been doing during an epidemic, a plague—he would be having sex with strangers.”

Sjón is one of Iceland’s most celebrated and awarded modern writers. He toyed with a number of variations of this sexually reckless character, but eventually Máni Steinn emerged with absolutely clarity. “There was just something about this character which told me that, most likely, my young man in Reykjavik in 1918 was gay, or queer, or however he defined himself at that time. Once I realized that, the story became just perfect.”

While the revelation of Mani’s sexuality was a natural one for Sjón, it certainly would not have been for many of his compatriots. “It was quite a political act, I think, to put a gay character into this setting, this storyline,” he says. “The whole title of the book is Moonstone: The Boy Who Never Was. Obviously, the history of gay people has been absolutely hidden from us here in Iceland, and gay people and queer people have had no place in our written history. So simply putting a character into that storyline is political.”

Of course, there’s the added fact that Sjón inserts Máni’s story into the tumult of Iceland’s independence. It’s hard to imagine conservative segments of American society taking kindly to the suggestion that there was a young gay prostitute running around the Continental Congress in 1776 Philadelphia. “I had expected controversy,” Sjón readily admits, “I thought, Ok, maybe this book, filled with scenes of Spanish influenza, silent cinema, queer sexuality, and with a little bit of leprosy thrown in, will be a moderate success among hardcore Sjón followers. But something happened, and the book became extremely successful here in Iceland.”

Sjón believes that the book’s popular reception—and the way in which so many, especially older straight women, have embraced Máni—reflects the great strides Iceland has taken in its acceptance of LGBT citizens. And there’s an added significance to that observation, because the story of Máni Steinn in plague-ridden Reykjavik is a very personal one.

“As soon as you have a gay character in such a situation, where a plague is going on, the parallel with the AIDS epidemic became quite clear to me. Very early on, I realized that I was writing a story that would resonate with that much later story, and would, in a way, become a a reverse mirror to what happened,” Sjón explains. “Because, as you know, when gay men started falling horribly ill, they were demonized, they were blamed for their sickness and society turned its back on them. I was very close with my uncle, Bósi, but he always kept the fact that he was gay a secret, until he told me one night that he had an incurable disease—at the time everyone knew what that meant. But in this book,” Sjón continues, “we have the reverse story. Here is a person who is completely on the outside, who has been pushed to the margins of society, and he responds with compassion, he helps those people who have treated him so badly.”

Eventually, in May of 1993, Sjón’s uncle Bósi died from AIDS-related complications. “When the book came out in Iceland,” Sjón remembers, “quite a lot of his old friends came to me and said, ‘Well, you know, there really was no place for gays here at that time.’ Some people, who never knew that he was gay, came to me and said, ‘I understand at last why, at times, he was so bitter, why he was so bitter about life and himself.’ ”

A poet at heart, there is a lyricism to Moonstone that, coupled with his assertion from the novel’s subtitle that Máni is “the boy who never was,” could easily have taken the reader out of the disturbing and challenging realities of the story. But by drawing an explicit line between this fictional teen and his uncle, Sjón’s novel is one that resonates. “This is a story that is still taking place in so many places,” he says. “We have kids living similar existences to Máni Steinn all over the world. But Máni shows us that it is possible to carry out a silent rebellion within a society of oppression. I think Bósi would have really enjoyed that; I think he would have understood that.”