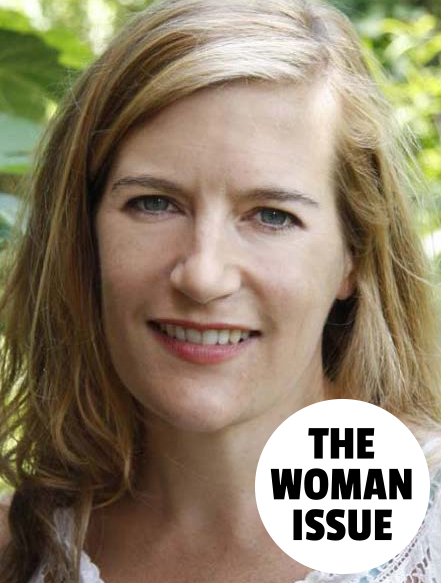 “I think it was around 2013,” Sophie Blackall begins. “I was at the Brooklyn Flea Market, looking through a collection of old lithographs, and there was this drawing of a cutaway of the Eddystone Lighthouse in Britain, and I couldn't leave it alone. I told myself that I didn’t need it and I walked away. But my friend said you shouldn't ignore something that tugs away at you like that. So I bought it, and then I put it away in a drawer somewhere.”

Blackall’s mind was on bears at that time—she was working on her award-winning children’s book Finding Winnie (2015)—but months passed, and she found herself coming back again and again to that image, to that seed of a story she’d put away. “Once this picture nagged away enough,” she says, and she decided to begin work on what would become Hello Lighthouse, “the next step, which is one of the loveliest parts of making a book, is the research. And I thought, if I'm going to make a book about a lighthouse, I should probably stay in one.”

The lighthouse Blackall found, on the northern tip of Newfoundland, Canada, had a lot in common with the one she so beautifully paints in her book. There were icebergs and whales and the wide open sea—and there was complete isolation. “The drama of life in the lighthouse was obviously intriguing,” she says, referring to storm-battered walls and daring rescues of sailors whose ships had foundered on rocks, “but I was just as interested in the kind of monotony and routine, living a life that was structured around having to wind the mechanism of the lamp every two and a half hours, carrying oil up to light the lantern, all throughout the night. They had all sorts of little hobbies to pass the time—some of them even made model lighthouses, which is almost too good to be true. And then, many of them had their families, wives and children.

“There are so many stories of the courage and bravery, diligence and dedication of lighthouse keepers,” Blackall explains. But living with those men were equally brave women. “I was really interested in that.”

Many lighthouse keepers were, in fact, women: some who inherited the job from a father or husband, others who got the job on their own, often in wartime. “But when they were there alongside their husbands or fathers, they did all of the same work as the male keeper, but they also cooked and cleaned and bore children,” Blackall says. “I had

long wanted to put childbirth into a picture book, and that’s not a terribly easy thing to do. I was so happy that I finally figured out how to do it in this one.

But the idea of giving birth in the lighthouse….” She pauses. “Women were entirely on their own, because even if their husband was there boiling water and being as supportive as humanly possible, there was still the lighthouse and its needs.”

Lighthouses are not what they once were. And yet they remain a potent symbol. “I was working on the book during the 2016 election and the aftermath,” Blackall says, “and it was really kind of wonderful to be able to escape in my head to the middle of an ocean. Lighthouses are still a symbol of hope. They represent the idea that there might be someone or something watching out for us, even as we’re tossed about on stormy seas.”

James McDonald is a New York–based writer and a British-trained historian.