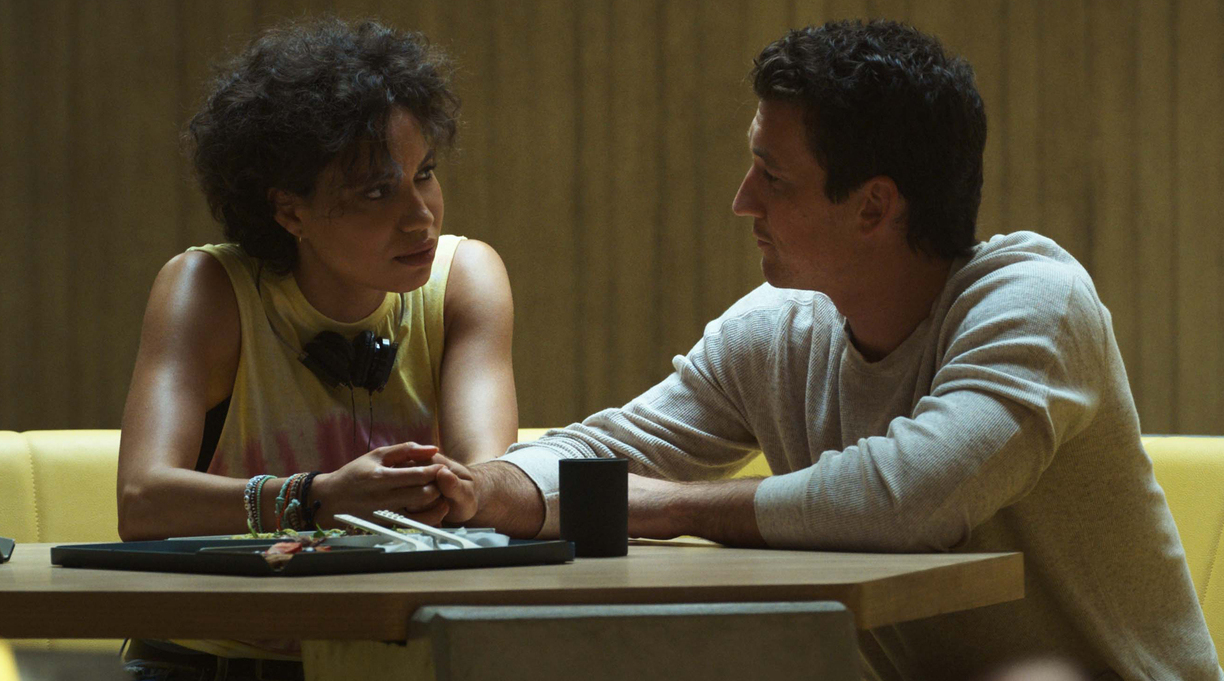 George Saunders’ short story “Escape From Spiderhead” first appeared in the New Yorker in 2010 and was later collected in the Kirkus-starred 2013 compilation, Tenth of December. It’s a dark jewel of a tale that uses its clever science-fictional premise to explore concepts of agency and empathy. Now it’s been adapted as a Netflix film, starring Whiplash’s Miles Teller, Thor’s Chris Hemsworth, and Lovecraft Country’s Jurnee Smollett. Its truncated title is simply Spiderhead, although its viewers may well wish for escape.

In the original tale, a man named Jeff is part of a program in which a group of convicts are the subject of series of pharmaceutical experiments. They’re injected with drugs (via a device called a MobiPak, attached to their lower backs) that have various effects—inducing feelings of love and lust, for example, or a compulsion to narrate their thoughts in great detail. One drug, ominously called Darkenfloxx, casts subjects into the deepest, darkest depression they’ve ever known. The man who runs the experiments, Abnesti, has lofty dreams of using the pharmaceuticals to solve societal problems—even if it goes against people’s own desires. “We have unlocked a mysterious eternal secret,” he says at one point. “What a fantastic game-changer! Say someone can’t love? Now he or she can. We can make him.”

Due to various legalities, the test subjects must give Abnesti permission each and every time he wants to inject them. Since they’re still prisoners, forbidden to leave the testing facility, this semblance of freedom is illusory; whenever a subject refuses, Abnesti just needs a waiver from his higher-ups to do what he wants. When Abnesti tries to compel Jeff to take part in an experiment that’s likely to result in another prisoner’s death, Jeff refuses—and when Abnesti leaves him alone to get a waiver, Jeff exercises his free will in a way that’s poignant, tragic, and ultimately inspiring.

The movie version, directed by Top Gun: Maverick’s Joseph Kosinski and written by Deadpool’s Rhett Reese and Paul Wernick, is far less subtle than its source material, and it lards the narrative with unnecessary material. Why do we need to know, for instance, that Abnesti (clownishly played by Hemsworth as an arrogant tech bro) was abandoned by his father and grew up in a foster home? Smollett’s character, a prisoner/test subject named Lizzie who doesn’t exist in Saunders’ story, seems thrown into the mix mainly to give Jeff (Teller) a conversation partner and love interest.

However, the film’s greatest flaw is that it ignores the message at the heart of Saunders’ story. The author takes great pains to stress how everyone, no matter what they’ve done, is worthy of compassion: “Every human, at birth, is, or at least has the potential to be, beloved of his/her mother/father,” Jeff reflects at one point. “Thus every human is worthy of love.” One could even argue that this encapsulates the story’s main theme. Yet the film treats most of the prisoners, except Jeff and Lizzie, as monstrous and unsympathetic; one of them, charmingly nicknamed “Shit-finger,” even has a habit of smearing feces on the wall with their bare hands. Far from showcasing the other prisoners’ humanity, the film eventually makes them a faceless mob that Jeff and Lizzie must escape. It’s telling that these two “good” prisoners’ crimes, which landed them in jail in the first place, involved accidents, while all the “bad” prisoners are portrayed as stone-cold murderers. In one bizarre scene, Jeff and Lizzie even chuckle to themselves about how horrible their fellow inmates are. If that weren’t enough, the film even throws in a prison-rape “joke” at one point.

The movie’s ending completely ignores Saunders’ poignant conclusion, trading it in for a dumb action scene set to the strains of Hall & Oates’ perky hit “You Make My Dreams,” of all things. Indeed, there’s an oddly large amount of yacht rock on the soundtrack, including the Doobie Brothers’ “What a Fool Believes” and Supertramp’s “The Logical Song”; the latter features a lyric that seem relevant here: “Won’t you please, please tell me what we’ve learned?” In this case, what we’ve learned is this: One should not adapt a story if one has no interest in what the story is about.

This is one of the first films from the New Yorker Studios, the magazine’s relatively new movie production company, which came into being two years ago. Judging from this outing, viewers would be forgiven for wondering if they can expect a version of Shirley Jackson’s “The Lottery” in the future that extols the virtues of mob mentality—before tacking on a happy ending. Roll credits, backed by Christopher Cross’ “Sailing.”