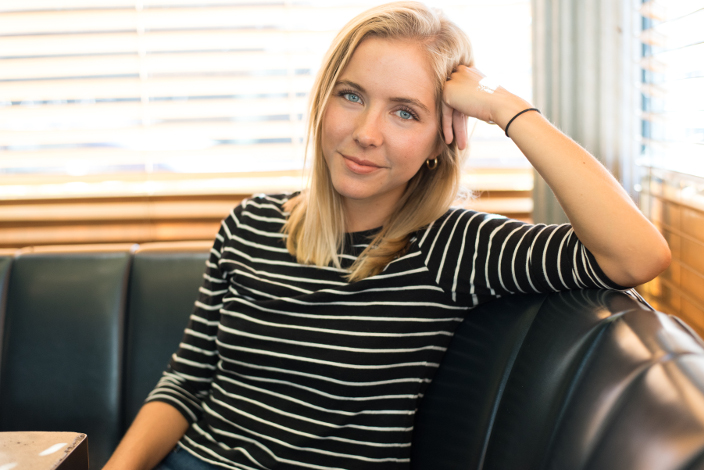 “You will develop a palate.”

“It’s a command from a voice from the future, that first line,” says Danler, who intended the second-person start as an homage to Jay McInerney’s Bright Lights, Big City. (McInerney reciprocated with an enthusiastic blurb for the back jacket.)

“The entire plot is in that sentence, ‘You will develop a palate,’ ” she says. “Nothing else really happens, except this young woman, this girl, develops her palate for life. What falls into that realm is what the novel’s about, and that’s the urban experience—that’s food, that’s wine, that’s lust, sex, and friendship.”

The protagonist of Sweetbitter, Tess, moves to New York City at age 22. She’s sans apartment, occupation, or outside support.

“Let’s say I was born in late June of 2006 when I came over the George Washington Bridge at seven a.m. with the sun circulating and dawning, the sky full of sharp corners of light, before the exhaust rose, before the heat gridlocked in, windows unrolled, radio turned up to some impossibly hopeful pop song, open, open, open,” Danler writes.

Danler is by now well-known as the former New York City server who parlayed her experience at the front of the house (at Union Square Café and Buvette) into a six-figure deal with a major publishing house (Knopf). While her CV inarguably informed the novel, Tess’ story is wholly her own.

“The plot is made up and the characters are made up—it’s fiction,” says Danler, who earned an MFA at the New School. “Someone asked me whether I had to do research, because it had been so long since I worked at Union Square Café but so much of it is lived experience. These details, they’re just in me. Most writers are observers, first and foremost. You can’t get to your grand themes—like paying attention, and the senses, or gentrification, or the American identity—without the details first.”

Sensual detail imbues Sweetbitter with vibrancy and freshness that lend the novel true aging potential. You can almost smell the musk of a fresh white truffle, presented in a small wooden box, shaved with a razor specifically designed for the job:

But it’s coworkers, not comestibles, that leave the most lingering effects. Not least of these are Jakes, a tousled, troubled bartender (sort of the personification of a white truffle), and Simone, a sleek, guarded lead server who’s often serving criticism to Tess.

As she tells her after one wine lesson, “You’re only beginning to learn what you don’t know. First you must relearn your senses. Your sense are never inaccurate—it’s your ideas that can be false,” Danler writes.

False friends, late nights, alcohol, drugs, injury, and intimacy: for Tess, learning to hold her own, professionally and personally, will prove a long, hot heady process.

“It takes a lot of practice to differentiate what the sensations are telling you,” Danler says. “I think that that’s part of growing up—this is a good sensation, and this is a bad sensation, and I want to cultivate the good now. Tess is only 23 when the book ends. She’s not even close to being able to make those distinctions, but she’s gone much further towards it.”