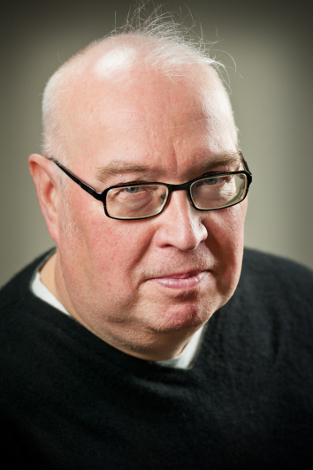 With just a glance at Death and Mr. Pickwick, one might presume to know a great deal about the novel’s author, Stephen Jarvis. At more than 800 pages, with a title alluding to the very first of Charles Dicken’s novels, The Pickwick Papers, it would seem a safe bet that the English writer is a lifelong fan of Dickens. He’s not. “I mean, I read Oliver Twist in school,” Jarvis says of his experience prior to taking on this monumental project. “That was it.” In fact, far from being a Dickens devotee intent on celebrating an established literary favorite, it was a single line that inspired Jarvis to embark on the 12-year journey to complete his debut novel—and it wasn’t even from the text itself, but from a modern edition’s preface.

“We have a radio program [here in the United Kingdom] called Desert Island Discs, where a celebrity has to choose eight records and a favorite book. On one particular episode, there was a comedian, and he chose The Pickwick Papers as his book, and he said that it was ‘so full of life.’ There was something about that that resonated with me. It made me get Pickwick out of the library and in the preface, I saw one line referring to the suicide of the first illustrator.” After a brief pause, Jarvis continues, “and I was just instantly fascinated. I got this

incredible buzz. I just knew there was something there that had to be written about and investigated. I mean, part of the fascination was that it was only one line. I wanted to know, why did he kill himself? That's where it all began.”

What began was an undertaking so vast, so all-encompassing, that it’s almost difficult to grasp. “It used to be said,” Jarvis says, “that more had been written about The Pickwick Papers than any other work of English fiction, and I can believe it. Literally, it’s hundreds of academic papers and books, and then there’s all the additional background and historical research. It was a mountain, and I made it my goal to read everything that had ever been written about Pickwick. And then, as part of the research, I also wanted to read the works that had influenced Pickwick. So I read old novelists like Smollett, Boswell's Life of Johnson, all sorts of things. I really wanted to come to understand what had produced this book.”

Never before and, arguably, never since has a work of fiction captivated the English-speaking world with such excitement as The Pickwick Papers (it was actually originally published as The Posthumous Papers of the Pickwick Club). Released in monthly serial parts, 19 over a 20-month period, Pickwick’s publication created “the birth of the modern celebrity,” Jarvis says. “There’s never been a book as big as The Pickwick Papers. It was just colossal. You'd have to move outside literature, you'd have to look at something like The Beatles to compare to it, the size of Pickwick as a phenomenon… and Pickwick was bigger than The Beatles! I think people are always fascinated by colossal, global successes, and Pickwick was the supreme example of that in literature.”

To add to the allure, drama in the writing process has plagued Pickwick since its conception. The family of Robert Seymour, the first illustrator (the one who killed himself), claimed that the concept for Mr. Pickwick was Seymour’s alone. This was hotly denied by Dickens, who wrote under the nom de plume Boz at the time, because it was The Pickwick Papers that established him as the literary force he was to become. Yet despite the clout that the novel once held, it has now fallen largely by the wayside, especially in comparison to some of Dickens’ later work, such as Oliver Twist, A Christmas Carol, A Tale of Two Cities, and Great Expectations. In writing Death and Mr. Pickwick, Jarvis hopes that interest will return.

“My hope is that Pickwick will be read in the context of my novel,” he says. “I think Pick wick has the greatest backstory of any work of literature, and I think if people get interested in that backstory, they’ll move towards the original again.” But more than that, Jarvis hopes to right a nearly 200-year-old wrong. “The other thing I really want,” he says, “is justice for Robert Seymour. I mean, this is the man that Dickens tried to airbrush out of history, and that just strikes me as very wrong.” Already, Jarvis has done much for the original illustrator’s legacy. He and his wife found Seymour’s tombstone, which many had thought irrevocably lost, and were eventually able to get it placed in the garden of the Charles Dickens Museum in London—the choice of location perhaps a not-so-subtle jab at the celebrated British writer.

“I think Dickens feared that one day someone like me would come along,” Jarvis concludes, an edge creeping into his voice. “There are things he says in his letters—I can't remember the exact quote, but he said something like, ‘the Seymour affair could come back to haunt our family long after my death.’ He was afraid that one day he’d be exposed, that someone like me would find out the truth.”