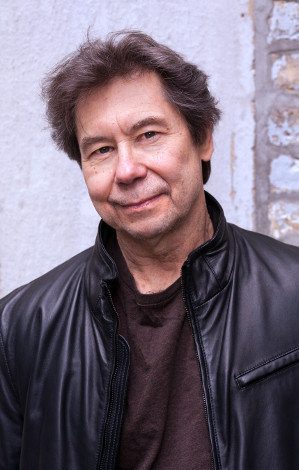 Anyone familiar with Stuart Dybek knows that he often writes about love, or to put it more bluntly, sex.

That’s certainly true in Dybek’s two new collections (his first books since 2003’s critically acclaimed I Sailed With Magellan). Ecstatic Cahoots is a collection of 50 short shorts, many of which are experimental, a notch closer to poetry in form if not on the sentence level. His longer, more developed stories are found in Paper Lantern: Love Stories, which is clearly marketed toward one of Dybek’s strengths: portraying love in all the life-giving, confusing and wrenching forms it can take.

This is not to say that Paper Lantern is the uplifting force one would expect from the typical Hollywood rom-com. That would be selling Dybek’s intellect and instincts far short. Stories work best in conflict, Dybek says. Eros is one half of the coin, the other is Thanatos, the Greek personification of death, and both are prevalent in Dybek’s collection.

The story “Four Deuces” might be the best example of this. The narrator, a woman stuck managing a bar that her ex-lover bought, is retelling the story of her failed relationship and is at once invigorated and tortured by his memory. This story (or a close version of it) was actually told to Dybek by a bartender in Buffalo, New York.

“That woman can’t refer to the guy she married by any name other than ‘Frank that son of a bitch,’ ” Dybek says. “The thing that’s making her so angry is he was that guy that was able to eroticize her life.”

Speaking with Dybek over the phone, it seems impossible for him to discuss his own writing without paying homage to his influences. He downplays his own skill in sweeping through swaths of time and balancing meditations of memory and forward action within a story, preferring instead to credit the likes of Proust, Faulkner, Calvino and Borges for showing him the way. All this is to say that Dybek is incredibly aware of his place in literary history and incredibly humble for a writer of his caliber.

French cinema and philosophy is another critical influence for Dybek, especially in his own version of “time travel” stories. When Dybek says time travel, he is redefining what this genre can be (much in the way he hopes Paper Lantern may redefine what many view as a love story). Dybek’s work is not science fiction, but love, and the memory of it, are his time machines. “Time stories are almost always love stories,” he says. “A lover personifies the past.”

And this is true for all of us, whether we realize or not. Just as the bartender in “Four Deuces” is rooted in a certain time and place, her spirit is torn between the past and present because of the love she once knew. It’s just the sort of insight, original and intimate, that readers have come to expect from Dybek.

Dybek has another book in the works, something closer to memoir currently titled St. Stuart, which will take readers (at least in part) back to his familiar stomping grounds of boyhood Chicago. It was as a Catholic high school student that Dybek first started writing, after all. Though at that time, he was writing pieces closer to the short experiments featured in Ecstatic Cahoots—playing up to his audience of teenage boys, of course.

Dybek shares one of these stories that his friends still tease him about. He adapted a then-popular children’s book of a toy tug boat going out to sea, but changed it to a turd floating down the sanitary canal near his childhood neighborhood, letting the piece of excrement keep all the ambition of the original tug boat.

Dybek laughs at the memory, saying those initial stories were little more than attempts at being a “smart ass.” He’s having a similarly good time writing St. Stuart, adding that it’s always been a goal of his to write something really funny—as if he hadn’t already achieved that with a story about an ambitious turd floating through Chicago.

Sean Rose is a former crime reporter who recently received his MFA from Texas State University. He is at work on a story collection. Follow him @swritenow.