An Interview with Susan McCauley 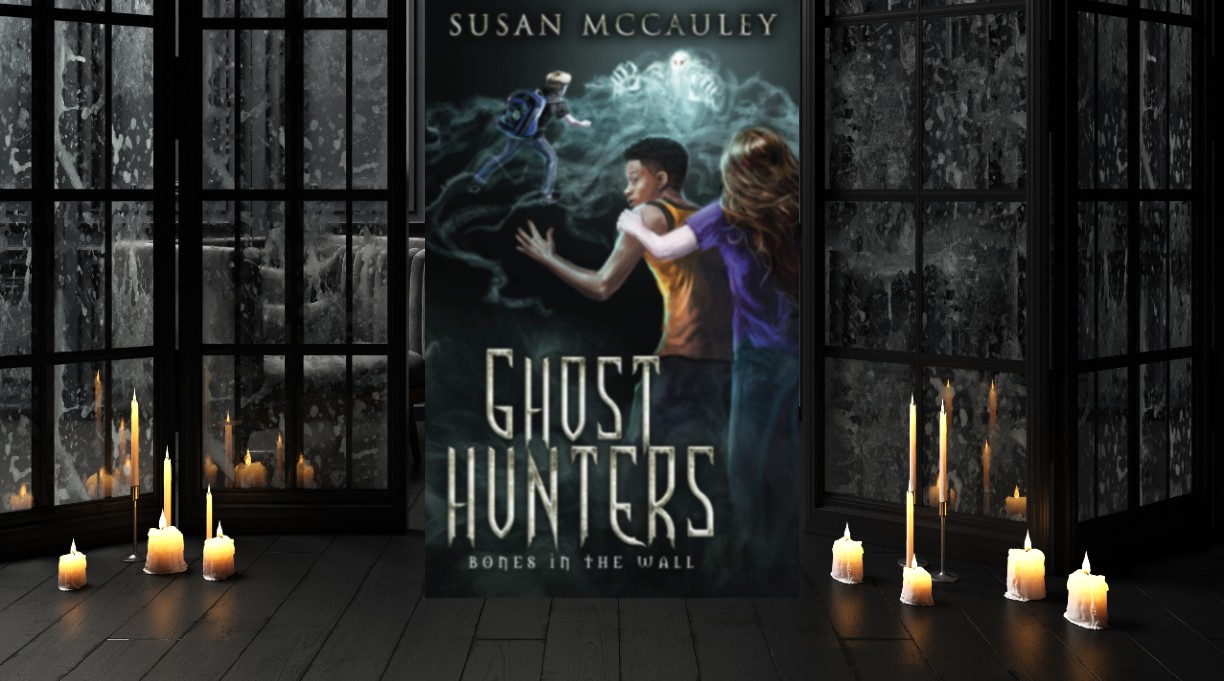 Author Susan McCauley’s interest in ghosts started at a young age. At the age of 3, she rode Disney’s Haunted Mansion ride with her parents. “I was terrified,” she recalls, “and hiding on the floor. Then we got off, and I begged them to take me again and again.”

Her fascination overcame her fear. “There was something about it that was so mystical and mysterious and scary,” McCauley says. “It grabbed my imagination. I had to see more of it.” In the years since, she’s put that imagination to good use. Her middle-grade series, Ghost Hunters, takes place in a world where the paranormal is a feature of daily life. Of Bones in the Wall, the first book in the series, Kirkus Reviews notes, “The ubiquitous nature of the spirits is a pleasing facet that stands out….Young readers should find themselves deeply engrossed.”

The book’s narrator is Alex Lenard, a well-liked 12-year-old boy, the star of his school’s ghostball team. On the way to the state championship game, Alex and his mother get into a terrible car accident. Alex is badly injured, and his mother is killed. Somehow, the accident gives Alex new psychic powers to see ghosts, an ability Alex tries to reject and even deny. “I’m twelve, and nobody becomes psychic when they’re this old,” Alex tells himself. “Ever.”

McCauley teases out the rules of the world with well-integrated exposition—a world in which the “Untouched” can’t hear or see ghosts but psychics can. Some of the Untouched—Alex’s dad, for instance—resent having to rely on psychics for protection. McCauley uses little details to illuminate a world far different from our own:

I looked at the glowing Arabic and Hebrew Seals of Solomon that covered our garage door….The paint was fresh. The city’s Office of Psychic Intervention, or OPI as most of us called it, repainted exterior doors every three months to decrease the likelihood of spirit attacks. If only the spiritualists back in 1900 hadn’t opened the door to the other side that no one could close, then we wouldn’t have to worry about ghosts and the whole world would have stayed normal. We’d had more than one hundred years to heal, and still most of the Untouched considered psychics little better than criminals for that one unforgivable sin. That first outpouring of spirits had cost people their lives. Now the psychics were a necessary evil, a dry, brittle hedge against a second scourge. Dad said they were like the IRS, only worse. Whatever that meant.

McCauley calls Alex’s experience of losing a parent a “massive, upsetting life change.” Her own father passed away shortly before the book came out. “The grief does consume you at first,” she says, and that’s true of what Alex goes through. “He’s got this mom and dad, and they’re living this pretty normal life,” she says. “And then in a split second, all of that changes. It can be taken away.” McCauley hopes Alex’s experience, and how he weathers it, is instructive for young readers.

“I wanted Alex to go through the extremes—for him to grow as a character, but also for the kids reading it,” she says. “They’re going through their own pain and their own struggles. I’m hoping they can go, Hey, if he made it through it, so can I.”

Alex’s journey is not only about learning to manage his grief, but also about embracing what makes him different. “A lot of kids are trying to figure out who they are, what their strengths are, who they’re going to be,” McCauley says. “Alex has to rediscover himself and realize it’s OK to be different.”

McCauley, who lives in Houston now, earned her MFA in screenwriting from the University of Southern California. Even in grad school, the themes and tropes of horror inflected her work. “My thesis screenplay was a vampire script,” she says. But she quickly became disenchanted with the Los Angeles scene. “I didn’t want to be a studio writer, writing what people told me to write.”

A series of events brought her to England, where she became a teacher. “I had to start reading a lot of these middle-grade books I hadn’t read in years,” she recalls. “I thought, Oh my gosh, this is so much fun—I’ve missed this!” Inspired, McCauley tried her hand at fiction. “That was the very beginnings of the Ghost Hunters series.”

Of course, it wasn’t all smooth sailing. “It was very rough and new,” she says. She remembers throwing an early draft in the trash. But she kept at it. Some 15 years later, the series is off and running. Two books, Bones in the Wall and Pirates’ Curse, have been published; two more are on deck.

McCauley is an advocate of the horror genre and of paranormal fiction for all ages. With the exception of books by R.L. Stine, McCauley says horror for young readers is not a crowded field. But the author sees middle-grade fiction and paranormal content as a natural partnership. “People like ghost stories,” she says. “They like being scared, to an extent. I think kids at that age are asking questions about death and what happens after we die. I hope the books give them some hope that there’s something else out there.”

Not everyone possesses McCauley’s enthusiasm for paranormal settings in children’s literature. “It’s a double-edged sword,” she says. “Some parents will say, Oh no, [kids] can’t read that book—that’s a scary book. Paranormal horror tags frighten parents and even some librarians. There’s a stigma: People hear the word horror, and they immediately think of something like the Walking Dead. And that’s not what middle-grade horror is.”

McCauley’s not exclusively a middle-grade writer. She has plans for a young adult series; other projects wait in the wings. For now, though, she’s interested in expanding what middle-grade fiction can be. She’s at work on a trilogy set in a world where magical people enslave the nonmagical. McCauley says the series is “very much about freedom and sacrifice.”

Like Ghost Hunters, that series is also about coming to terms with who you are. “That’s a really big thing for kids,” says McCauley. “You can be different and figure out great ways to use those differences.”

Walker Rutter-Bowman is a writer and teacher living in Brooklyn, New York.