Tales of the Unwritten Mumbai 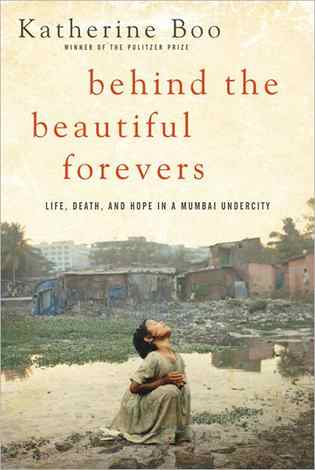 Nearly five years ago, Pulitzer Prize-winning reporter Katherine Boo discovered Annawadi, a twilight settlement buried in the heart of metropolitan Mumbai. There she found a rich universe, plagued by poverty, whose residents resolutely cling to their fragile aspirations.

In her debut, Behind the Beautiful Forevers, Boo delivers unto readers their story with a crisp, graceful prose that elegantly captures the hidden lives of her subjects. In a starred review, we called it "the best book yet written on India in the throes of a brutal transition."

What first drew you to Annawadi, and what made you feel this was the right setting for your first book?

When I read about a person or place being “representative” in narrative nonfiction, I tend to roll my eyes, and I’d never claim the same for Annawadi. But the slum did resemble India in its diversity. Residents came there from all over India, bringing with them myriad religious practices, belief systems, talents and personal ambitions.

While the slum’s physical setting, in the shadow of five luxury hotels, was obviously striking, a striking setting is never enough to keep me going back to a given place. Initially, as I was reporting hard in other slums, the people of Annawadi drew me back there.

There was Manju, a teenaged college student who was trying to figure out the plot of Mrs. Dalloway in a hut by a sewage lake, or Zehrunisa, a Muslim mother of nine whose diffident eldest son sorted and resold richer people’s garbage, and who did this stigmatized work so well that the family had a future more hopeful than that of any other family in the slum. I wanted to know what happened to them—whether they would realize their dreams and fulfill their potential in a city whose wealth and corruption seemed to be increasing in lockstep.

How is the Mumbai you describe in your different than the one portrayed in films and fiction?

The Mumbai of film and fiction is often a noir one, in which the average guy is a gangster, the average woman a concubine. My interest as a writer is in more ordinary low-income people, particularly women and children, and in seeing how their experiences over time illuminate the infrastructure of opportunity in their societies.

A boy named Mirchi was always saying, "Why are you following boring people like us? People will fall asleep reading." But one of the few things about which I feel confident in these weird days before my book is released is that it's not full of boring people. It's full of complex, amazing people—people perhaps less familiar to readers than those gangsters and concubines.

How different was it reporting on poverty in India rather than America?

There were many differences, and one was that I felt a little safer at night in Indian slums. The noir stories notwithstanding, there are thus far fewer guns in poor urban communities than their U.S. counterparts.

The Indian criminal justice system, on the other hand, is more blatantly corrupt than our own. There were commonalities, too, though, and one of them was that the unprecedented opportunities being provided to low-income people, officially, looked different when seen from the ground.

You often document using photographs and recordings. How do these artifacts help your writing?

I started using a variety of recording devices in my work because it aided in fact-checking, and armored me when my stories went out in the world. Now though I find the video and audio camera to be essential writing tools as well. Although I’d like to think that after all these years I take pretty good written notes, recording often preserves more of a moment’s nuance and texture.

Years later I can press a button and hear, say, the frenzy at Annawadi when a fake eunuch appears in a temple at midnight and starts predicting people's futures, or the astonishment in the voice of a boy who has been sent  to an infamous detention center where he encounters the first real teacher of his life. I can watch or listen again and again, picking up things I missed when an event was unfolding before my eyes. For me, good nonfiction writing begins with good reporting. The more thoroughly I document something, the more able I am to evoke it on the page.

How important is immediacy in capturing the stories of people like the Annawadians?

I can’t overstate how much being there, or reporting incidents soon after they happened, mattered to chronicling the Annawadians' lives with accuracy. Take the boy I just mentioned who was in detention. If you ask him now about his time in detention, or the dramatic and tragic events that preceded it, he prefers to remember himself as being cool and in control, not scared out of his wits.

Over the years, many other Annawadians rewrote some of their most stressful moments in similar ways. We all do that from time to time, but Annawadians were fairly unified in their sense that painful memories interfered with the hope they needed to get by day to day.

You often remove yourself from the narrative. Do you have to consciously work to make yourself invisible from the stories you tell?

In journalism about the poor, there can be a self-congratulatory subtext in the use of the first person—directing the reader’s attention away from the people in poverty and toward the supposed difficulty of the reporting. I can be quite impatient with that.

As a writer I’ve embraced my subject by choice. I can get off the sweaty bus and walk away. My hope is to devote whatever limited space a reader might grant me to conveying what life is like for the people who can’t get off and walk away.

Clayton Moore is a writer and a photographer based in Boulder, Colo. His work can be found at claywriting.blogspot.com.