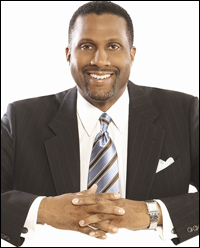 Scholars and historians often bemoan our collective assessment of Martin Luther King Jr.'s legacy. It focuses too narrowly on convenient tenets, they tend to say, rather than revealing the full complexity of the civil rights leader's life. In this, the 50th anniversary year of the Civil Rights Act of 1964, Tavis Smiley, the multimedia entrepreneur and author of 16 books, wants to complicate our understanding of King by honing in on the last year of his life in his new book, Death of a King: The Real Story of Dr. Martin Luther King Jr.'s Final Year.

King has been an icon for many, including Smiley. As a teenager, Smiley entered oratorical competitions and delivered some of King's speeches. In an August 2013 op-ed for USA Today before the 50th anniversary of the March on Washington, Smiley wrote that King's "spirit entered my soul. I recognized the rhythms of his rhetorical passion as more than hypnotic; I knew they were righteous. As a result of their deep and disturbing truths, I became a lifelong student of his call to radical democracy through redemptive love."

Smiley, who hails from hardscrabble beginnings in Mississippi and Indiana, has had talk shows on Black Entertainment Television and National Public Radio. Along the way, he has built a media empire that includes his company, The Smiley Group, an eponymous foundation, and the High Quality Speakers Bureau. In April, he received a star on the Hollywood Walk of Fame.

What he says is most important to him, however, is remaining true to a black prophetic tradition such as King's and speaking truth to power. Beyond the black community, Smiley is probably best known as the host of The Tavis Smiley Show, now on PBS (he also has a show on Public Radio International). Within the African-American community, however, Smiley has become a more polarizing figure since his 2008 commentary about then-presidential hopeful Sen. Barack Obama. For more than a decade, Smiley offered commentary on the Tom Joyner Morning Show, but when he chided the black community for their "hysteria and hype" over Obama, the response was so voluminous that Smiley left the show.

Still, Smiley has remained one of the most persistent and visible African-American critics of President Obama aside from Smiley’s friend Cornel West, with whom he has co-authored a book and conducted a now-defunct radio show, Smiley & West.

In the August 2013 USA Today editorial, Smiley wrote, "Just as (King) condemned the use of napalm in the Vietnam War, he would surely condemn the use of drones in the murder of innocent civilians, especially women and children." He adds in our interview: "If King were here, militarism, poverty and racism—he would be calling the president to pay attention to that. The corporate-controlled media makes that difficult, and yet there are people who are faithful until death to get the truth out."

Death of a King proves Smiley to be among that cohort of truth-tellers. Readers well-versed in King's less popular views on America's hypocrisies will not find details of his anti-Vietnam stance surprising. What is revelatory in Death of A King, however, is the continuing relevance of a message delivered half a century ago and the price King paid for delivering that message. It is simpler, Smiley said, for us to cling to King as a dreamer.

"I think that people think that Dr. King gave one speech in his whole life and that it had one line and then he died," Smiley says, referring of course to King’s "I Have a Dream" speech. "He had five more years of his life. In the course of those five years, he says to Harry Belafonte, 'My great fear is that we have integrated into a burning house.' Harry said, 'Well, what would you have us do?’ Doc said, 'We have to become firemen.' "

King took the lead with a speech delivered at Riverside Church in New York City, quoted early in Death of A King: "I knew that I could never again raise my voice against the violence of the oppressed in the ghettos without having first spoken clearly to the greatest purveyor of violence in the world today—my own government.” That statement exposed King to physical, political and ideological backlashes that included government surveillance, assault and death threats.

"It's easier for our collective consciousness to talk about the monument, to commemorate a holiday and a postage stamp than to accept that we helped to kill King," Smiley says. "Pretty much everything and everybody turned against him. The last Harris Poll found almost 55 percent of his own people, 75 percent of the American people considered him to be persona non grata. No one wants to accept that we pushed him into his grave."

Years after King's death, "there's still a heavy price to pay for trying to hold leaders accountable," Smiley says emphatically. "I caught a lot of hell in the past seven years. That hell and hate came from my black people. But I love black people, and there's nothing they can do about it."

Death of a King is also intended to serve as a wake-up call. "There are people trying to tell us the truth day in and day out about what is destroying this country, and we ignore them at our peril," Smiley warns. "There's not a single empire in the history of the world that hasn't faltered and failed. We keep preaching this notion of American exceptionalism. I love America, was born here, I will die here, and I will do everything in between that to make it better. But empires fall. Everything that King said then is even more real now."