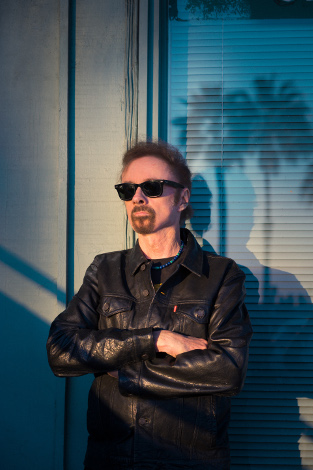 Novelist T.C. Boyle has a thing for what he calls “gurus”—pioneering, difficult men whose cultlike charisma complicates the lives of everybody around them. The Road to Wellville (1993), his satire of nutritionist and cereal innovator John Harvey Kellogg, was the first in a series that’s continued with novels on sex researcher Alfred Kinsey (2004’s The Inner Circle) and architect Frank Lloyd Wright (2009’s The Women). His new novel, Outside Looking In, focuses on LSD researcher Timothy Leary in the early ’60s, as his rigorous psychological studies began to morph into a nascent trippy counterculture.

“You don’t know what your themes and obsessions are until you start writing books, and I seem to have an obsession with the guru figure,” he says. “I didn’t write [Outside Looking In] with the current political situation in mind, but certainly one can apply this to blindly following a leader and what the cost is to the followers.”

Leary is the central magnetic figure in the novel—“the shining star everybody want[s] to study with” when he arrives at Harvard. But the core story turns on Fitz, a Ph.D. student, and his wife, Joanie, as they begin to experiment with the then-legal but little-understood drug. LSD loosens their psychic and sexual inhibitions, so much so that they happily follow Leary as he attempts to launch communes in Mexico and New York. But as the atmosphere becomes druggier, betrayals and disenchantment set in.

Still, Boyle says his intent is not to malign hippie culture or the drug itself, just to capture Leary, who died in 1996, at a pivotal point in his life. He also wanted to explore the roots of the society he wrote about in his 2003 novel, Drop City, about a foundering back-to-the-land community. “It was refreshing to me to see him as a charismatic young Harvard professor, delving into areas that had not been delved into before—the whole hippie consciousness I wrote about [in Drop City] seems to derive from these moments.

“Am I skeptical? I do not do the drug now. I never had particularly good experiences. Yes, I saw visions, and the early parts of the trip were quite enjoyable, as with any drug high. But my experiences beyond that were exclusively negative. I think my mind churns too much anyway to be in need of such a stimulation or reinforcement.”

To that end, even in its most psychedelic moments, the prose in Outside Looking In is consistently realistic, avoiding logorrheic flourishes or any kind of prose to which the word “groovy” might apply. (Fitz feels a “propulsive rush of color and image as if a movie were playing in his head at double speed—two movies, three.”) “All the writing of the ’60s was over-the-top—Kurt Vonnegut, Tom Robbins, [Richard] Brautigan, etc.,” he says. “I love that, but I felt we’ve seen that before. We’ve been there. I wanted to make it a realistic novel about a surrealistic time, because I think it invites the reader more closely into the conundrum with what’s going on with Fitz and Joanie.”

Boyle’s longtime habit has been to write short stories after finishing a novel. Related to his interest in synthesized drugs like LSD, his newer stories reflect his interests in the perils of modern technology, from self-driving cars to CRISPR-Cas9 gene editing to drug-resistant diseases. “I'm just trying to figure out what these things mean,” he says. “Like any other writer, I don't have a concrete idea of what I think and believe until I see it through this medium of writing. I’m opening up the unconscious to find out what all this seems to mean to me, then shaping a work of art for whomever might read it about what's happening in society.”