The Return of Scotland’s Most Charming Bookseller 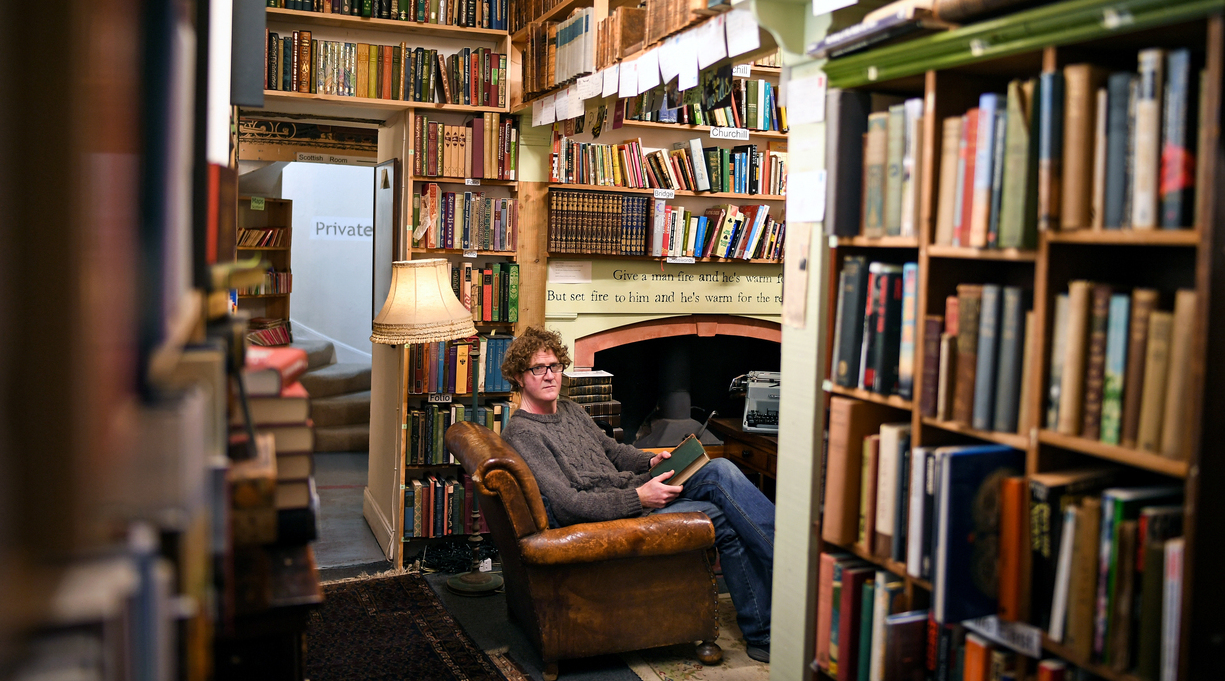 If you read Kirkus Reviews, you likely enjoy that glorious niche genre of books about books. It’s certainly one of my favorites. And what could be more books-about-books than a book about a bookseller writing about books and the customers who buy those books? Books!

Out this month is Remainders of the Day: A Bookshop Diary (Godine, Dec. 6) by Shaun Bythell, owner of The Bookshop in Wigtown, Scotland, the largest secondhand bookstore in the country. The author’s latest book is the third in an unofficial series based on his personal journals, following Diary of a Bookseller and Confessions of a Bookseller, which Kirkus called “irascibly droll and sometimes elegiac…an engaging account of bookstore life from the vanishing front lines of the brick-and-mortar retail industry.”

The drollery and thoughtful eccentricity continue unabated in the cleverly titled Remainders, in which Bythell regales us with further tales of life as the owner of an independent bookstore. It’s a refreshingly human narrative in the age of Amazon—about which the author offers a litany of cheekily potent complaints—and brings us directly into the cozy confines of his charming world. In addition to compelling tales of literary sleuthing, Bythell delivers poignant portraits of the colorful characters who populate the store, from clueless (and often rude) newcomers to reliable regulars like “Sandy the tattooed pagan,” who “rarely leaves empty-handed.”

While Bythell’s days “follow predictable patterns revolving around behind-the-counter sales to at times unusual patrons, order fulfillment for the Random Book Club, or acquisition hunts for tomes by obscure writers or on arcane—but surprisingly bestselling—topics like Freemasonry and heraldry,” the book is never boring. Any book lover knows that there’s always something fascinating to discover on every shelf, and Bythell is a knowledgeable, occasionally cranky, frequently hilarious guide through the stacks. As an editor friend of mine noted, “Don’t drink coffee (or tea) while reading Bythell, as you're likely to choke or spit it out during a laughing fit; you’ve been warned.”

Some of the most interesting aspects of the author’s profession are the difficult decisions he has to make regarding the purchase of used books, whether in-store or at estate sales. It’s clear he doesn’t want to disappoint his customers, but he also must weigh important issues of demand and physical space. Here’s one pertinent example:

A tiny woman wearing patchwork trousers brought in ten boxes of books, mostly Victorian children’s novels, which look beautiful but for which there appears to be little or no demand. I gave her £80 for a couple of boxes of reasonably interesting titles. She asked if I could take the lot as she’s moving into a smaller house and doesn’t have enough space. The shop is now bursting with boxes of books that people have dumped here and I don’t want. I’ll have to head to the recycling plant in Glasgow soon.

After lunch a man asked me if I’d consider selling volume VII of a set of the first Statistical Account of Scotland (twenty-one volumes in all, published between 1791 and 1799, and compiled by Church of Scotland ministers from various parishes). I told him that there was no way any bookseller would break a mint twenty-one-volume set unless the customer was prepared to pay the full price for the set for a single volume. For some reason customers seem to think that we’re happy to break sets to satisfy their demand for a single volume. This is a relatively new phenomenon.

If such minutiae sounds intriguing, you can’t go wrong with this book. Now that it’s gift-giving season, thrill the avid book lover in your house and buy all three of Bythell’s delightful chronicles.