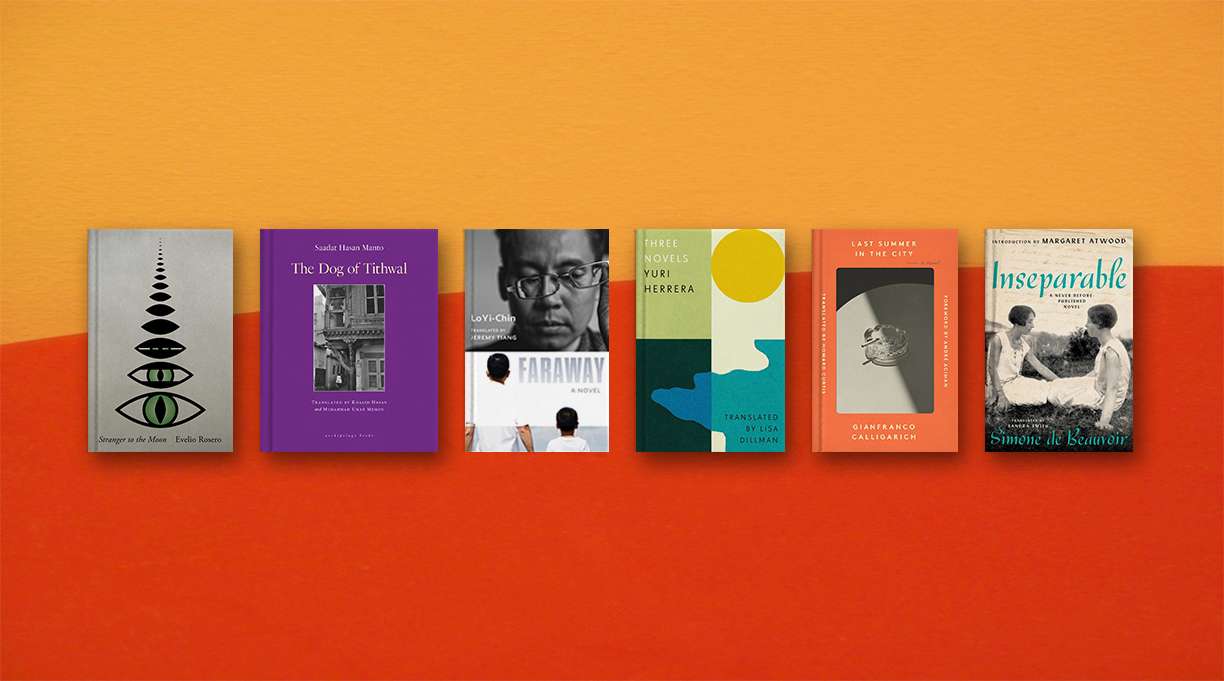 With so many brand-name writers publishing books this season, it would be easy for less-well-known authors to get lost in the shuffle. It’s particularly hard for books in translation to break through, Ferrante and Knausgaard notwithstanding. These recently published books all received starred reviews from Kirkus and deserve a wide readership.

Inseparable by Simone de Beauvoir, translated by Sandra Smith (Ecco, Sept. 7): Beauvoir is hardly unknown, but this previously unpublished novel could appeal to readers of Elena Ferrante who wouldn’t have thought of reading fiction by the author of The Second Sex.Inspired by her own childhood friendship with a woman who died at 21, this brief novel follows Sylvie and Andrée, two Parisian girls who “meet at school, vie for top honors, and become inseparable,” according to our review. “A moving portrayal of intense female friendship, identity, and loss.”

Last Summer in the City by Gianfranco Calligarich, translated by Howard Curtis (Farrar, Straus and Giroux, Aug. 10): Originally published in Italy in 1973, this novel about a young man drifting through life in Rome went in and out of print and was rediscovered a few years ago to great acclaim, a sort of Italian Stoner. Now it’s been translated into English for the first time, with an introduction by Andre Aciman. Our review said, “The account of a lost generation in Rome in the early 1970s…carries the weight of both family history and generational saga.”

Three Novels by Yuri Herrera, translated by Lisa Dillman (And Other Stories, Sept. 14): In these three short novels—Kingdom Cons, Signs Preceding the End of the World, and The Transmigration of Bodies—“the Mexican postmodernist, heir in equal parts to Cormac McCarthy and Juan Rulfo, delivers a hallucinatory study of his country,” according to our review. “One of Herrera’s central preoccupations is with finding a language to convey the strangeness of our time.”

Faraway by Lo Yi-Chin, translated by Jeremy Tiang (Columbia Univ., Sept. 7): A Taiwanese writer named Lo Yi-Chin—the author’s namesake—travels to mainland China to help his father, who’s had a stroke and is in the hospital. He’d gone back to visit the family he left behind when he fled to Taiwan in 1949 and started a new family, and now Yi-Chin must try to get his father home while dealing with the hospital bureaucracy and his newfound half brother and cousins. Our review says Lo “finds humor in his namesake’s struggles with mainland customs and red tape while tapping into a rich vein of memories and emotions stirred when history or crisis makes the challenges of family life even gnarlier. Thematically rich and intriguing.”

The Dog of Tithwal by Saadat Hasan Manto, translated by Khalid Hasan and Muhammad Umar Memon (Archipelago, Sept. 14): This is a substantial, posthumously published collection of stories from a celebrated Urdu writer. As our review says, Manto has an “ability to regard everyone—crooks, the upper class, politicians, soldiers, housewives, and prostitutes—with an eye trained on humanity. Manto’s characters are forced to consider themselves anew as blood is shed and political boundaries are redrawn.”

Stranger to the Moon by Evelio Rosero, translated by Anne McLean and Victor Meadowcroft (New Directions, Sept. 7): This compact fable by celebrated Colombian writer Rosero creates a world in which a group of naked prisoners are kept in a house where they’re forced to serve the “clothed ones.” As our review says, “The narrator describes his silent and interior rebellion against the clothed ones, unraveling this small society’s structures and rituals in all their nuance and complexity.…Though the world of this story is bleak—sometimes almost unbearably so—the narrator’s soliloquies on agency in the midst of captivity and degradation are timeless, haunting, and extremely powerful. A profound work of dark and brutal truth.”