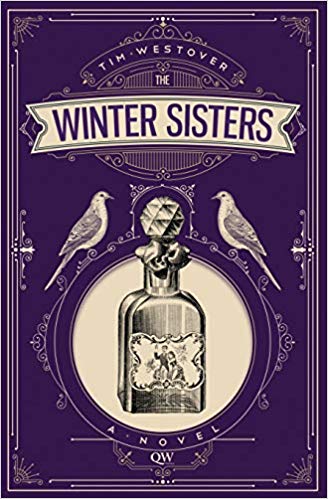 Grayson, Georgia, resident Tim Westover admits that he may not have the keenest sense when it comes to news stories. His father, Frank, was in the TV news business; at one point, he worked for CNN’s Headline News. (Before going to bed, Westover could turn on the TV and see the back of his father’s head in the control room.) Westover once accompanied his dad to “Take Your Child to Work” day. The 12-year-old was, at the time, in thrall to the SF movie Stargate, and he urged his dad to lead the broadcast with a mention of the film. “No,” his father advised. “We have to go with Bill Clinton.” Westover still doesn’t get it. “Ancient Egyptians and spaceships,” he says with a laugh. “How could you not lead with that?”

But when it comes to folklore, supernatural tall tales, and regional culture, Westover, a computer programmer, is like a sponge. He haunts local history museums, libraries, and even antiques stores, where he soaks up spellbinding stories and fantastic characters that inspire and populate his books.

The latest, The Winter Sisters, is a fish-out-of-water tale set in 1822 Lawrenceville, Georgia. Aubrey Waycross a Savannah-based doctor, has been lured by the hamlet’s mayor “across this vast state, at the cost of all my money.” Turns out it was under the false pretenses of a possible rabies epidemic triggered by an elusive panther—a “boogeyman of the woods.” Waycross interrogates the mayor:

“I take it you’ve seen the creature?”

“Naw, but why do you have to see it to believe it?”

“Because that’s science, sir!”…It was the mayor’s lie that should have bothered me—his false pretenses to snare a re­spectable doctor in his hog-cursed, mud-soaked, huckster-plagued little hamlet.

Waycross is further disconcerted to find that the locals are more apt to consult three sisters—Rebecca, Sarah, and Effie Winter, who live just out of town dispensing their home remedies­—than his learned self. To the pastor, they are witches; to Waycross, merely charlatans, much like a medicine-show huckster. Yet Waycross gradually and grudgingly becomes fascinated by the sisters’ ancient practices.

Westover imbues his novel with a visceral sense of place. His prose, says Kirkus, “is wonderfully detailed, capturing the lushness and grit of his superstition-ruled setting,” as in this indelible moment when newly arrived Dr. Waycross realizes the primitiveness of his surroundings: “I placed my foot down, and the mud and ichor of the alley splattered all over my trouser legs.”

Westover grew up in Lawrenceville. “Lushness and grit” are not words he would have once used to describe it. “This was the pits, dullsville,” he says, “a place people don’t even think about as they drive past it.” But he got a fresh perspective on his hometown when he delved into its folk history and discovered “crazy, wonderful and interesting things” that happened there. He cited a tea shop that opened in town and a road behind it called Honest Alley. “That was an ironic name for it because in the days of mule trading and patent medicines, everybody got cheated and swindled there,” he explains. “I wouldn’t have known that if there weren’t a [descriptive] street sign and I hadn’t followed up in the Historical Society archives. There’s a great story.”

And Westover loves stories. His father would regale the family at the dinner table with whatever weirdness crossed the Associated Press wires that day. Growing up, he went from books by Roald Dahl, Tolkien, and C.S. Lewis to the Modern Library’s list of the 100 greatest novels of the 20th century, which he resolved to read before graduating high school. He earned a spot in Georgia’s prestigious Governor’s Honor Program. “An extra six seeks of school in the summer, but that was great,” Westover says with a laugh. Beyond the academic benefits, it served as a bridge program that prepared him for college (he attended Davidson College in North Carolina).

Westover says that he imbued Waycross with his own personality. “Kind of uptight, slightly nerdy,” he says with a laugh. “I’m a computer programmer; Waycross is the 19th-century equivalent. He begins as a character closed to any strangeness and oddities, who is perhaps too high-falutin’, like someone who’d say, ‘I’m going to read the 100 best novels of the 20th century.’ ”

When it came time to write his first book, a collection of stories called Mermaid Street, he did what any commercially savvy writer would do—he wrote them in Esperanto, a nod to Tolkien and his invented languages. “I sold about 200 copies; that’s about 95% of the Esperanto market,” he jokes.

But Esperanto transformed him into a traveler. “I’ve [gone] to a lot of interesting places on the back of Esperanto to attend meetings,” he muses. “And that extended to the Georgia mountain area. The lawn goes unmowed and the garden gets overgrown because, on weekends, I want to go to a folk festival, visit a weird museum, or a restaurant that has a strange kind of food I’ve never eaten before.”

These excursions yielded tantalizing tales of ice hurricanes, potatoes from hell, haunted pianos, invincible turtles, and the tragic story of the doomed love of a Native American princess whose grave is located in an actual traffic intersection in the north Georgia city of Dahlonega.

His first novel, Auraria, basks in such found stories and Americana. “I feel less like a writer than a story collector,” he reflects. “I highlight or write down interesting stories, folktales, legends, and historical oddities I find interesting, put them in a Word document and then write a novel that connects them.”

When asked about what draws him to these tall tales, he references Carl Jung and Joseph Campbell and mythic archetypes, but in the end, he says, it all comes down to, “They add some color and richness to the world.”

Which is what he hopes readers take away from The Winter Sisters. “Life and knowledge and belief are more complicated than we think they may be,” he states. “We’re never served well by staying in our little boxes. We do much better when we open ourselves up to something, even if it seems very strange, and see how it expands our ideas and experiences.”