'Tough Sh*t' and Other Advice from Kevin Smith 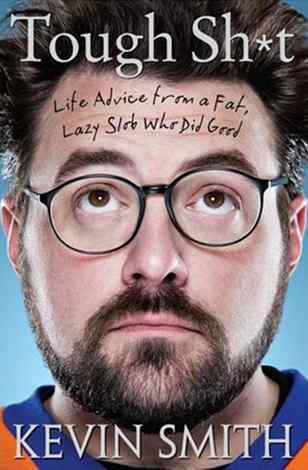 Kevin Smith’s most successful and enduring creation is, without a doubt, Kevin Smith.

An owlish, pop-culture savant from Jersey, Smith has transformed himself—through charm, smarts and years of relentless hustle—into something like the voice of a generation. He’s a moviemaker, Twitter celeb, writer of comic books and memoirs, comedian and tireless champion of independent film.

Additionally, he owns a comics shop, runs a production company, presides over an empire of message boards and podcasts, and, for all I know by the time this is published will have just opened the first KFC franchise on the moon. The guy’s got a lot going on, is what I’m saying.

Smith has always been—has thrived on being—a  polarizing figure. He is beloved and despised in equal measure, but usually by different people. However, after reading Tough Sh*t: Life Advice from a Fat, Lazy Slob Who Did Good (asterisk in the original), out this week from Gotham Books, I must announce myself a member of both camps.

Smith spends at least part of the book in philosophical mode, discussing the production of his greatest work—himself. There is much here that is moving and perceptive, and of great value for any creative artist or would-be artist. Unfortunately, there are also a number of central arguments that are simply the purest howling nonsense.

To begin with the good. For the first time, Smith is presenting himself, without a trace of arrogance or pretension, as an inspirational figure, talking about the challenges and joys of becoming and remaining a working artist, and saying, quite explicitly, Go thou and do likewise. It’s an odd position to be in, and he acknowledges as much: “If civilization collapses, the skills of any entertainer mean fuck-all,” he writes. “[Making movies] is ultimately unimportant. It will not save lives. It will not stop the planet-killing asteroids...It will not change how we survive as a species. But so long as I pour everything into it as if it does matter...[t]hen even the mundane elements of a life that will likely end badly can be elevated, elaborated, and celebrated.”

That passage encapsulates the tone of the book—self-deprecating but engaged. Smith may not take himself seriously, but he’s serious about his art: “My American Dream has always been simple, and it’s one I encourage you to adopt as your own: Figure out what you love to do, then figure out how to get paid to do it,” he writes. “In the face of such hopelessness as our eventual, unavoidable death, there is little sense in not at least trying to accomplish all of your wildest dreams in life.”

When it comes to making those dreams happen, Smith cites the advice he got from his sister: “You don’t have to want to be a filmmaker, just be a filmmaker...Every thought you have, think it as a filmmaker. You’re already a filmmaker; you just haven’t made a film yet.” And he talks unflinchingly of the temptations and compromises that face any aspiring artist, and keeps coming back to the same messages of courage and comfort: Trust yourself. Do what you know is right. He calls it “tough shit,” but it’s more like tough love—funny, compassionate and wise, a word not usually associated with Kevin Smith, unless it’s appended with “-ass.”

Which is why it’s doubly frustrating to read Smith’s scattered thoughts on criticism, audiences and artistic growth—thoughts that seem all the more contradictory, self-serving and wrongheaded for being surrounded by so much that is well-argued and insightful.

Smith begins with a poke at the critical establishment, positively glowing with adolescent bitterness: “After years of letting inferiors insist in print that I was bad at expressing myself, I was done with the critical community...The concept no longer made sense to me...How the fuck can self-expression ever even be classified by someone who’s not expressing it themselves?” It’s an old complaint—How can someone who’s not an artist himself sit in judgment of an artistic endeavor?—but one that doesn’t hold up to even a moment’s consideration. After all, you don’t have to be a dancer yourself to notice when the ballerina falls flat on her ass.

And Smith continues to beat the stuffing out of various straw men, oblivious to any contradictions in his approach: “Only someone who doesn’t understand art tells an artist their art somehow failed,” he writes, as if there’s no such thing as good art and bad—after spending a lot of pages being snide about “corporate conglomerates pumping out barely scripted sequels and remakes,” he notes that “you can’t apply a mathematical absolute because there is no one formula for self-expression,” which is entirely true—but also irrelevant, because that’s not what criticism is. The role of a fair-minded critic is to judge the work on its own terms—that is, to determine what the work is trying to do, and then assess how well it achieves that goal. For example, in Tough Sh*t, Smith argues that critics have no place in any conversation about art, but his argument fails to persuade because he fundamentally misrepresents what criticism actually does and what it’s for.

If the first half of Tough Sh*t was exhilarating, the back end just sort of made me sad. Smith’s self-transformation, his concept of himself as an artist, is admirable, but he seems to have written off the idea of growing as an artist. With Zack and Miri Make a Porno, he says, he realized he was “making movies about making movies.” Feeling he was running out things to say with film, he has already made plans to retire from moviemaking. That, too, is admirable, on one level—better to leave the party early than wear out your welcome—but it never seems to occur to him that maybe he could find something new to say.

Why not? The problem, I think, is Smith’s investment in his self image as a cult artist. He quotes Michael Eisner’s dictum: “If you’re not careful with your brand, you lose the audience.” Now, everything Smith has, he owes to his audience, and I can understand his loyalty to them. But Smith is actively hostile to the idea of growing beyond his devoted legions. “The intent to bring me into the mainstream was always flattering, but let’s be honest: What I do in film...isn’t for everybody,” he writes, with the air of a man trying to convince himself. It’s not hard to sense the fear behind that hostility—the fear that if he loses the audience, he loses everything. Time and again, it inhibits his artistic choices: “My audience isn’t going to like this,” he says at one point.

So a support system becomes a cunning trap. Smith has won the most fiercely and vocal fanbase in all of film by being exactly who he is—and for fear of alienating that fanbase, he can never evolve or change. In the cruelest irony of all, Smith excoriates mainstream Hollywood for playing it safe, for pandering, for Giving the People What They Want—all while doing the same himself, to the point where he would sooner quit altogether than risk straying too far out of his comfort zone.

Kevin Smith’s greatest creation, the one that brought his dream to life, is Kevin Smith. His worst creation—the one that is leading him to put that dream down, execution-style—is his audience. Now that is some tough shit.

Jack Feerick is a fat, lazy slob from western New York and critic-at-large for Popdose.