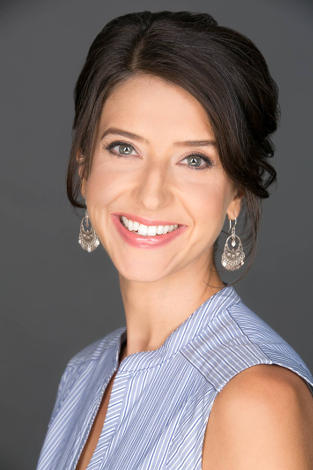 Vanessa Manko never thought she would write a novel. Growing up in suburban Connecticut, the debut author trained in ballet and danced professionally with a company before deciding to attend college.

“I was at that age, 19 or 20, figuring out what I wanted my life to be,” says Manko. “I desperately wanted my education, and felt that window was closing.”

She decided to study English at the University of Connecticut, and went on to receive a master’s degree from New York University’s Gallatin School of Individualized Study, where she focused on dance history and performance studies. Often throughout her master’s program, Manko found herself writing fiction in secret, stealing away from her other writing to work on short stories.

“I loved writing and literature,” she says. “I followed my heart.”

Her heart led her to an MFA in Fiction Writing at Hunter College, where she began work on her novel, The Invention of Exile. “Hunter gave me the time and space to think maybe I could move away from short stories and into this larger world,” she says.

Manko’s first foray into novel-writing was set in the conservatory world she knew so well from her dance background. But her teacher, the writer Colum McCann, advised her to “stretch your imagination” and step outside her comfort zone. She shared with him a piece of her family history: a grandfather she never knew who immigrated to the United States from Russia and was deported during the Red Scare in the early 20th century, forced to leave his family behind.

“Once I uttered it, there was no turning back,” Manko says of the idea.

Manko describes this family history as forming the “bones” of the novel, and from there she used her imagination to tell her grandfather’s story, which wasn’t discussed as she was growing up.

“It’s funny how we accept what we’re told as kids. I just thought maybe my grandmother didn’t have a husband,” she says with a laugh.

She wanted to use the story as a way to get to know her grandfather as a man. “We lost and missed out on the patriarch of our family,” she says. “And this was my way to ask, ‘Who was he?’ ”

The Invention of Exile tells the story of Austin Voronkov, a Russian-born engineer who immigrates to America in 1913 and finds work at a factory in Bridgeport, Connecticut. He boards in a home where he falls in love with one of the daughters who lives there, Julia. They marry, and are just beginning a life together when history cuts sharply in. Austin is rounded up in the Palmer Raids (a series of raids during the Red Scare to round up and deport radical leftists) and interrogated for several days. Wrongly accused of attending anarchist gatherings, his limited English and the grueling, unjust interrogation (“designed to break you down,” as Manko puts it) make it nearly impossible for him to defend himself. Austin is swiftly deported, and his young family returns with him to Russia, which was embroiled in civil war. From there, the Voronkovs flee to safety in Paris, before eventually landing in Mexico City.

“We don’t think of Mexico City as a place where refugees ended up but it was, particularly among Russians,” says Manko.

Here, the family enjoys a peaceful existence together for a brief while, and these are the memories Austin clings to in his lonely hours. Julia and the children are eventually able to return to the United States, and Austin remains behind, hopeful he can join them soon.

“I wanted to show the way these large institutions affected one person’s life, and how powerless we are in the face of larger events,” says Manko. “Imagine repeatedly being kicked out from a place where you are trying to build your home.”

When Manko jokes that she read a whole book for every paragraph she wrote, she doesn’t seem to be entirely kidding: in order to immerse herself in the time, she turned to fiction such as Dostoyevsky’s Crime and Punishment, Notes from the Underground and The Double and The Gambler. She read works by Graham Greene, Carlos Fuentes and Katherine Anne Porter, and re-read Dr. Zhivago, by Boris Pasternak, which she described as a “classic love story.” She consulted non-fiction texts like La Capital: The Biography of Mexico City, by Jonathan Kandell; The Impossible Triangle: Mexico, Soviet Russia and the United States in the 1920s; The Russian Diaspora, 1917 – 1941, by Boris Raymond and David Jones and much, much more.

This aggressive research is a skill she observed in Salman Rushdie, who she worked for as a research assistant as part of her Hertog Fellowship through Hunter. “I saw firsthand how a novelist uses research, and how to immerse yourself in a world. The kind of ethos of a culture, how you pay attention to dress, and how people speak,” she says. It reminds her of something else Colum McCann taught her: “If you’re going to write a novel it’s like getting a four year degree.”

As part of her research, Manko traveled to Mexico City to explore the streets where her grandfather (and her character) made his home. She planned the trip with a close friend from Hunter, Aura Estrada, who was born in Mexico. Estrada was to show Manko around the city, but this never happened.

Estrada died in a bodysurfing accident in July 2007, at the age of 30, while on vacation in Mexico with her husband, the novelist Francisco Goldman (whose 2011 novel, Say Her Name, centers on the tragedy). The loss still affects Manko, who says she felt Estrada with her on the trip, and tried to write the book with her spirit in it.

“It was a multi-layered experience,” she says. Manko’s father also had close ties to the city, and he too passed away while she was working on the book. “It informed the writing,” she says.

The novel acutely captures the feelings of grief and isolation that Austin experiences while on his own and missing his family. “But it was not the life he was supposed to live,” Manko writes. “How does one live with longing?”

“Grief is an alienating experience,” she says. “I really do feel like the loss and absence of my grandfather stayed in my family, even though it wasn’t talked about. We inherit those things, a legacy of loss.”

Manko is quick to point out that aside from being about loss and exile, The Invention of Exile is also about creativity and invention. Austin sets up a repair shop in Mexico City, and works on engineering designs (with increasing desperation), hoping to secure a patent to grant him passage to the country and the family he so craves.

The writing is delicate and the novel moves back and forth in time, through Austin’s various states, with grace. Manko says there are similarities between dance and writing: the daily practice, the need for repetition, pacing, tone, the building of stamina—even structure and choreography. “Dance lives in you the same way the structure of a novel does,” she says. “You know things innately by movement.”

Her family’s warm and supportive reception of the book has made Manko feel successful in the way she chose to explore her family’s history. Manko often wondered why her grandfather did not just cross the border, and spent a lot of time thinking about borders in general—both literal and figurative—as she wrote.

“We turn to novels as a way to understand the human experience in a way textbooks can’t,” she says. “This book was a way to bring my grandfather across borders—not just of countries but of time. To tell his story instead of him just being one name, a footnote in American history.”

Courtney Allison is a former book publicist. She lives in Brooklyn.