A Sponsored Interview with the CEO of Sourcebooks, America's Largest Woman-Owned Publisher 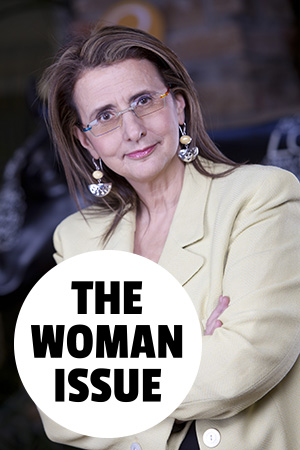 “I’m very excited by the #MeToo movement,” says Raccah, CEO and founder of Sourcebooks, Inc., of Naperville, Illinois, the largest woman-owned American publishing company. “I get that it’s hard to see [men] who you respected and who are iconic in certain fields brought low, but those women’s experiences are the truth. We need to understand their experiences, and we need to learn a lot more.”

To that end, Sourcebooks is engaged in a 360-degree initiative to find creative answers to the question, “How do we not only give women greater voice, but also help to bring forward the female experience in more rich and compelling ways?” she says.

Raccah’s experience at Chicago-based advertising firm Leo Burnett, where she started in the qualitative research department—along with $17,000 from her 401K—helped launch Sourcebooks as a publisher of books for bankers in 1987. Over the next 30 years, the company diversified its products and deftly incorporated cutting-edge technologies.

“I used not to engage in conversations about what it’s like to be a woman in this role,” says Raccah, who, in 2016, received the Book Industry Study Group’s Innovation Award and was named “Person of the Year” by Publishers Weekly. “I would give talks about publishing, talks about technology, and never actually deal with the fact that I was female, even though I might be addressing a room of 250 people, the large majority of which might be female. It’s only been in the last few years where I’ve really started talking about that part of it.”

Though Raccah now considers mentoring other women an important part of the job, she won’t mince words when it comes to describing persistent inequality in the industry.

“I will tell you straight up, as a woman-owned publisher, we don’t get the same level of reviews that our peers who are male-owned get,” she says. “I don’t think we get the same level of respect sometimes, which really frustrates the shit out of me…because it’s kind of disempowering to talk about what you don’t get. But what surprises me is what we don’t get often comes from women.”

Publishing and promoting women in all jobs and genres is just one way Sourcebooks aims to counter that culture. At YA imprint Sourcebooks Fire alone, Raccah cites the names of three bold female authors introducing readers to rich new worlds: Marieke Nijkamp, author of New York Times bestsellers This Is Where It Ends and Before I Let Go; The Bone Witch author Rin Chupeco; and Zoraida Córdova, author of the Brooklyn Brujas series.

“Part of what’s different about Sourcebooks is this idea that we publish authors, not books,” Raccah says. “That idea has a lot of implications, and the first is that you’re really interested in having a longterm relationship with somebody, not a one-night stand. You’re having conversations about career, strategy, growth that advance through multiple books.”

To advance equality in the book industry and beyond, Raccah challenges her peers in publishing to keep having the uncomfortable conversations it takes to make change.

“We are still living in a world that limits parts of our population,” says Raccah, “and we need all talent. We need all human beings participating in a future that is big and bold and broad....We’ve got issues, as a nation and as a world, and I suspect that some of the very best ideas for solving them will come from [currently underrepresented] voices.”