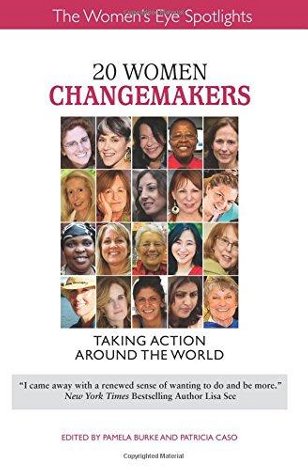 In Ensoulment, Lorís Simón Salum shares her interviews with 24 experts who explore “the feminine principle in Western culture.” The group provides indelible descriptions when dissecting the feminine mystique: “The rhythmic…and the intuitive”; “both strength and delicacy, both firmness and love”; and “the encircling embrace.” The volume, which earned a Kirkus star, tackles six themes, from the media to religion. “Thought-provoking statements on almost every page; unmissable for women’s studies and religion students,” our critic writes.

Readers become acquainted with a bevy of generous innovators in 20 Women Changemakers,edited by Pamela Burke and Patricia Caso.This collection of interviews from The Women’s Eye —a radio show and website—features advocates like Maggie Doyle, who built a school in Nepal with her $5,000 savings, and Estella Pyfrom, who spent roughly $1 million of her own money to buy a bus that transported computers to needy Florida children. According to our reviewer, “Activists of all descriptions will find encouragement in these uplifting, albeit brief, success stories.”

The difficulties of womanhood take center stage in Andrea Jarrell’s I’m the One Who Got Away, which received a Kirkus star. The autobiographical essays  focus on the author’s mother, a woman who’s still attracted to Jarrell’s roguish father. A detailed portrait emerges in these pages as the author relates her family history. “Their mother-daughter relationship is more poignant than any love story,” writes our critic, calling the memoir“a stunning series of recollections with a feminist slant.”