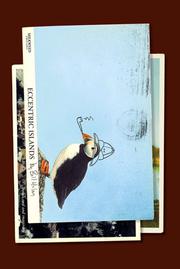 ECCENTRIC ISLANDS: TRAVELS REAL AND IMAGINARY
by Bill Holm
"Holm mixes keen you-are-there observations with profound bits of homespun philosophizing, and never once does he sound a false note. The result is a pleasure for islomanes, and for anyone who appreciates good writing."
An expertly wrought memoir of journeys to islands real, metaphorical, and imagined. Read full book review >

NON-FICTION
Released: June 1, 1996
THE HEART CAN BE FILLED ANYWHERE ON EARTH: MINNEOTA, MINNESOTA
by Bill Holm
NON-FICTION
Released: June 1, 1996
THE HEART CAN BE FILLED ANYWHERE ON EARTH: MINNEOTA, MINNESOTA
by Bill Holm
After living all over the US and teaching in China, Holm (Coming Home Crazy, not reviewed) reapplies himself with gusto and grandiloquence to life as lived in his hometown, the minute Minneota, Minn. ``The Music of Failure,'' the book's centerpiece essay, showcases most of Holm's themes: the values of the local past, the particulars of family chronicles, the uses of memory, and, in contrast to these qualities, America's rootless lack of history and its obsession with individual success. Having met with failure, however, the author argues that failure is as American as success, and that memory, to be complete, must include those whose failures generally relegate them to obscurity. Holm focuses on the Bardals, a family of Icelandic immigrants who were never an all-American success story, dying out in rural poverty after a century in Minnesota. Pauline Bardal, the last survivor (whom Holm knew as a boy), nonetheless had her own virtues: laconic stoicism, natural charity, and even a minor talent for playing the organ. The author sketches two further examples of virtue in failure: Sara Kline, the town bag lady, to whom the young Holm was still required to show courtesy, and his Aunt Ole, whose romantic cheerfulness prevailed over genteel poverty. And he celebrates the qualities his austere Icelandic ancestors brought to the New World, including a love of literacy and hidden sociability. Holm occasionally provides some interesting contrasts with these musings on family and small-town characters and events by juxtaposing various of his experiences in China. But his exhaustive reaffirmation of his own ``from-ness'' curiously cuts out his experience of the rest of America in a sometimes ostentatious localism. Holm's frequent invocations of Walt Whitman and Tom Paine sometimes overtax the small-town context, but at their best, these essays make a virtue of parochialism. (22 b&w photos, not seen) Read full book review >