Carol Higgins Clark is the author of six bestselling Regan Reilly mysteries, Decked, nominated as Best First Novel for both the Agatha and Anthony Awards, Snagged, Iced, Twanged, published by Warner Books, Fleeced, published by Scribner in October 2001 an 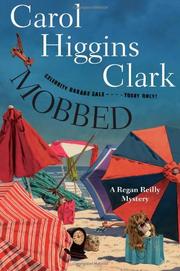 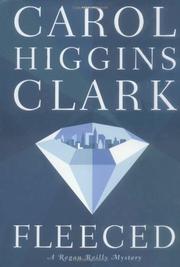 MYSTERY THRILLER
Released: Oct. 23, 2001
FLEECED
by Carol Higgins Clark
MYSTERY THRILLER
Released: Oct. 23, 2001
FLEECED
by Carol Higgins Clark
"Baa, humbug. "
Manhattan's once tony Settler's Club, now reduced to letting space to Miss Lydia and her Meaningful Connections singles' gatherings and Maldwin Feckles and his ill-attended school for butlers (current enrollment: four students), is about to receive a hundredth birthday windfall: Longtime members Nat and Ben, joint-owners of four immensely valuable diamonds, have decided to sell them and donate the proceeds to the club. But Nat slips in the tub; Ben falls under a bus, and—abracadabra!—the diamonds are suddenly missing. Thomas Pilsner, the rookie Settler's manager, asks his p.i. friend Regan Reilly, in town to attend a crime writers' conference with her world-famous author-mom, to help out. Were the two deaths mere accidents? And wherever could those diamonds be? Using Nat's club apartment as her sleuthing base, Regan (Twanged, 1998, etc.) finds herself surrounded by his and his late wife's sheep collection: life-size sheep with sparkly eyes, sheep ornaments that have been collecting dust for years, sheep appliqués on towels, and more varieties than you can knit sweaters from. She's also beset by a slew of con artists, burglars, and worse at one of Miss Lydia's soirees. A genuine English butler arrives, a New York film director departs, and those life-sized sheep are trundled all over town before the Club gets what it deserves, and so do all the culprits, though not the long-suffering reader. Read full book review > 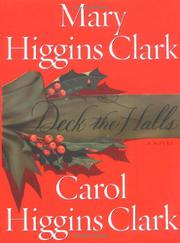 FICTION & LITERATURE
Released: Nov. 1, 2000
DECK THE HALLS
by Mary Higgins Clark, Carol Higgins Clark
FICTION & LITERATURE
Released: Nov. 1, 2000
DECK THE HALLS
by Mary Higgins Clark, Carol Higgins Clark
"Admire the shipshape carpentry as the preposterous story purrs along while still delivering fewer thrills than most fruitcakes."
Christmas is a time for family togetherness, so it figures that this first collaboration between bestselling Mary Higgins Clark (Before I Say Good-Bye, p. 404, etc.) and her daughter Carol (Twanged, 1998, etc.) tosses together so many regulars from both authors that there's barely room for the crooks. And a hapless pair of perps they are. Spurned heir C.B. Dingle is wrongly convinced that chain mortician Luke Reilly persuaded his late uncle to leave most of his fortune to a gardening league. His dimwitted partner, painter Petey Commet, seems to have sucked too much lead from the chartreuse he used on one of Luke's reception rooms. When they kidnap Luke in revenge, grabbing his part-time driver Rosie Gonzalez as well, and stash them on a houseboat moored in Edgewater, New Jersey, while they wait for a million-dollar ransom, these two hopeless duffers go up against not only Luke's family—his world-famous mystery writer wife Nora and his shamus daughter Regan—but against lottery-winning ex-cleaning lady Alvirah Meehan and her husband Willy as well. The mother-and-daughter authors—who are so obviously on the same wavelength that even though the abduction plot and some of the dialogue seem recycled from their earlier books, everything blends together in seamless inconsequence—produce a holiday rout for the forces of junior-league evil undisturbed by any hint of real villains, real detectives, or real suspense. Read full book review > 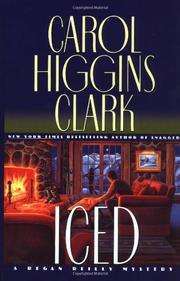 MYSTERY THRILLER
Released: July 3, 1995
ICED
by Carol Higgins Clark
MYSTERY THRILLER
Released: July 3, 1995
ICED
by Carol Higgins Clark
Regan Reilly, the LA investigator who's evidently never worked at home or for money, is at it again, this time dogging the steps of the thief who's been disguising himself as a Santa at children's parties in order to clean out paintings from some old acquaintances in Aspen, Colorado. The leading suspect is Sam and Kendra Wood's missing caretaker, Eben Bean, but we knowand after a while even Regan knowsthat Eben's been kidnapped by Judd and Willeen, the real thieves, looking for cover while they bide their time waiting for their big score: the famous Beasley portrait of crusty old Geraldine Spoonfellow's grandfather, a portrait also coveted by Judd and Willeen's archrival, the Coyote. While Eben and kidnapped housekeeper Bessie Armbuckle alternately struggle to get out of their handcuffs and swap limp quips with their abductors (not exactly a triumph of realism, these scenes), and the shamus hired by Geraldine rushes to her side with an amazing revelation (!!!), Regan makes warmly supportive remarks, and in no time at all the crooks are behind bars where they belong. Despite the title, Clark's third (Snagged, 1993, etc.) gets by without homicideand without suspects, mystery, suspense, or detection. Her obvious competitors, the Nancy Drew stories, are much cheaper, and illustrated with line drawings. (Mystery Guild main selection; national advertising; author tour) Read full book review > 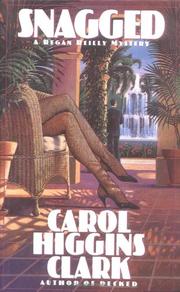 MYSTERY THRILLER
Released: July 16, 1993
SNAGGED
by Carol Higgins Clark
MYSTERY THRILLER
Released: July 16, 1993
SNAGGED
by Carol Higgins Clark
Kindly crackpot Richie Blossom's developed his latest invention- -runproof, snagproof pantyhose—just in time for a Miami pantyhose convention. If he can just raise $1.1 million over the convention weekend, he can save the Fourth Quarter—the housing project he shares with other retirees—from getting sold out from under them. But Ruth Craddock, ``queen of the cotton crotch'' for industry giant Calla-Lily Hosiery, is determined to keep Richie's invention off the market, and somebody's hired a thug to kill him too. Fortunately, L.A. shamus Regan Reilly (Decked, 1992) is on hand to solve the mystery—or would be, if there were any mystery. (The mastermind of the tepidly nefarious plot turns out to be an insanely minor character who might just as well have been your grandmother.) Good-natured, gamely humorous, but clueless. As for Richie's invention, well, ``This stuff is like kryptonite. It just won't destruct.'' Read full book review > 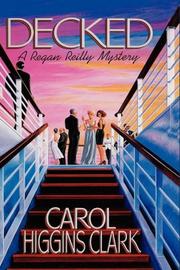 MYSTERY THRILLER
Released: July 14, 1992
DECKED
by Carol Higgins Clark
MYSTERY THRILLER
Released: July 14, 1992
DECKED
by Carol Higgins Clark
Despite the contemporary setting, it might as well be 1938— Agatha Christie time—aboard the Queen Guinivere, where p.i. Regan Reilly has been persuaded to travel to New York with dotty old Lady Veronica Exner. Both Regan and Lady Exner are recovering from a jolt: Just before they shipped out, the body of Regan's ten-years'-missing college roommate, Athena Popolous, was discovered during a reunion at St. Polycarp's, right around the corner from the Exner estate. Could the killer have been Lady Exner's nephew and heir-apparent, stammering Prof. Philip Whitcomb, or his improbably sharp-eyed fiancÇe, Val Twyler—or one of the stable of stock villains trying to rob or kill Lady Exner aboard the Queen Guinivere? Fortunately, a stable of equally familiar-looking shipmates (including Regan's universally adored suspense novelist mom, obviously modeled on first-novelist Clark's own famous mother) is on hand to help Regan to a revelation that's a lot less surprising than you might expect. Welcome flashes of mild humor don't lift this from the humdrum. Read full book review >