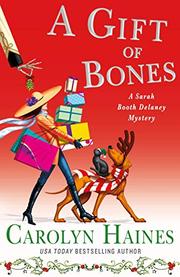 FICTION & LITERATURE
Released: Oct. 16, 2018
Reviewed: July 31, 2018
A GIFT OF BONES
by Carolyn Haines
FICTION & LITERATURE
Released: Oct. 16, 2018
A GIFT OF BONES
by Carolyn Haines
"A stocking stuffed with something for everyone: a friendly house-ghost, cats and dogs, a hunky romantic lead, and the requisite crime. Perhaps that's why this parcel seems a bit bloated. But hey, it's Christmas."
A tale infused with Southern charm of an amateur detective trying to locate a pregnant kidnapping victim before her due date. Read full book review > 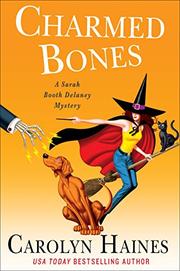 FICTION & LITERATURE
Released: May 15, 2018
Reviewed: March 6, 2018
CHARMED BONES
by Carolyn Haines
FICTION & LITERATURE
Released: May 15, 2018
CHARMED BONES
by Carolyn Haines
"Confusing multiple plots and double agents make this latest installment a little hard to follow, but Haines comes through in showcasing her heroine's romance and friendship where it really matters."
The arrival of a trio of Wiccan sisters creates chaos in a Mississippi town and brings plenty of business to a female-fronted detective agency. Read full book review > 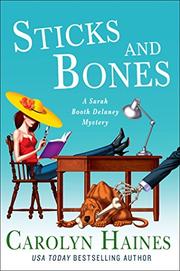 FICTION & LITERATURE
Released: May 16, 2017
Reviewed: March 6, 2017
STICKS AND BONES
by Carolyn Haines
FICTION & LITERATURE
Released: May 16, 2017
STICKS AND BONES
by Carolyn Haines
"The mystery, past and present, isn't up to much, and Haines doesn't know any more about filmmaking than you do. But who else would create a climactic scene of which one witness observes: 'I've never seen a woman give birth and do a vault onto a man's shoulders'?"
Hollywood roars into Zinnia, Mississippi, along with several less welcome blasts. Read full book review > 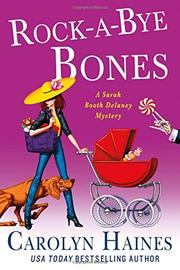 FICTION & LITERATURE
Released: May 17, 2016
Reviewed: March 3, 2016
ROCK-A-BYE BONES
by Carolyn Haines
FICTION & LITERATURE
Released: May 17, 2016
ROCK-A-BYE BONES
by Carolyn Haines
"As usual, Haines crams a lot into her latest cozy (Bone to Be Wild, 2015, etc.), aiming at readers with a taste for levity rather than restraint."
A Mississippi detective must dig down deep into the roots of a town when a newborn is left on her doorstep even though her business partner may want to keep the baby for herself. Read full book review > 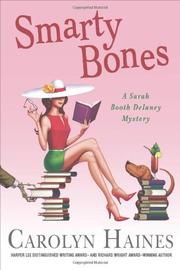 Released: May 21, 2013
Reviewed: April 15, 2013
SMARTY BONES
by Carolyn Haines
Released: May 21, 2013
SMARTY BONES
by Carolyn Haines
"Less chipper than most of Sarah Booth's excursions—and it's time to lay that silly ghost Jitty to rest."
The best families of Zinnia, Miss., fear that a beautiful corpse will tie them to the Lincoln assassination. Read full book review > 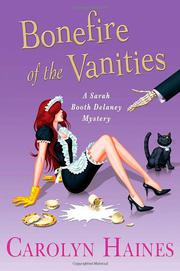 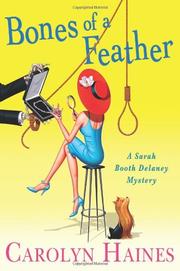 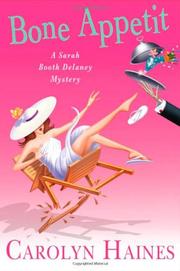 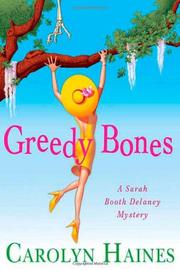 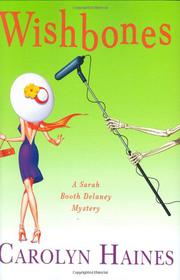 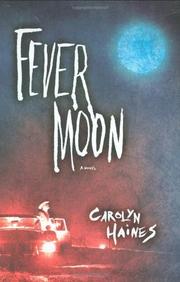 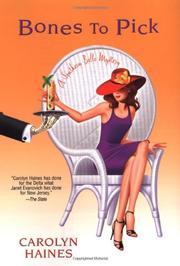 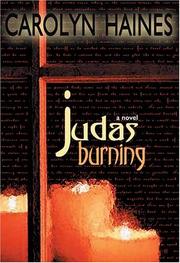 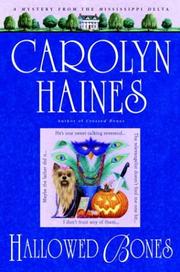 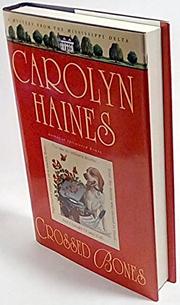 FICTION & LITERATURE
Released: April 8, 2003
CROSSED BONES
by Carolyn Haines
FICTION & LITERATURE
Released: April 8, 2003
CROSSED BONES
by Carolyn Haines
"A down-home valentine, far superior to Splintered Bones (2002), that couldn't be more southern if it were packaged with grits. Haines plays every race card in the deck and throws in some bedroom scenes for readers who like a little romance."
Zinnia, Mississippi, has two things going for it: The best white blues-guitarist, Scott Hampton, strums away at African-American Ivory Keys's roadhouse, Playin' the Bones; and a passel of Daddy's Girls (DG), who've grown up, like Tinkie, to epitomize southern womanhood—except for Sarah Booth Delaney, the slightly askew DG who runs her own detective agency and so is hired by Ida Mae Keys to prove that, despite the evidence, Scott didn't murder her husband. So who did? Her black-supremacist son Emanuel is a possible candidate. So are ex-con racist bikers Spider and Ray-Ban and wealthy, impossibly perfect blues collector Bridge, who begins courting Sarah to the despair of smitten but married sheriff Coleman Peters. As Sarah Booth and Tinkie, their beloved dogs Sweetie Pie and Chablis, and a smart-mouthed ghost who's been hanging around Sarah Booth's house for years try to sort out the good 'uns from the others, race blasts the community apart, with nooses dangling, white-supremacist tattoos peeking out from beneath good-ol'-boy T-shirts, Molotov cocktails, and tombstone desecration. Scott's biggest fan is a certifiable nutcase even if she is a DG, and there are rumors of a stash of never-released studio recordings of Elvis and Ivory that are worth millions. But who has them, and who'd kill for them? Read full book review > 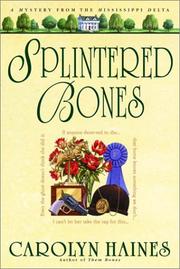 MYSTERY THRILLER
Released: March 5, 2002
SPLINTERED BONES
by Carolyn Haines
MYSTERY THRILLER
Released: March 5, 2002
SPLINTERED BONES
by Carolyn Haines
"Something for everyone: spandex-wearing ghosts; horses and more horses; southern-fried dysfunctional families; even that heroic appearance by Kinky. Would it be too much to ask for logic too?"
In her hardcover debut, Daddy's Girl-turned-p.i. Sarah Booth Delaney already has enough fanciful habits to move Zinnia, Mississippi, into the whimsical column all by herself. She talks aloud to Jitty, the ghost of an ancestral retainer determined to marry her off; sleeps with Sweetie Pie, her ugly tic hound; and dotes on Kinky Friedman mysteries. The whimsy runs even higher when her lifelong friend Eulalee "Lee" McBride confesses to bashing in her husband's head just before he was stomped to death by Avenger, their stable's prize stud horse. Nobody, including Sunflower County Sheriff Coleman Peters, believes her, and all agree she's protecting her violence-prone teenaged daughter Kip. Assisted in Daddy's Girl style by society reporter Cece (née Cecil before a trip to Sweden and extensive hormone therapy) and flirtatious Tinkie, the partner in her detective agency, Sarah Booth is soon confronting Bud, the stable's sexy trainer; LaCoco, a bayou Mafioso, and his three attendant goons; Nathaniel Walz, a smarmy land developer; and a cotillion's worth of other Daddy's Girls, including Carol Beth Farley, who's obsessively jealous of Lee, and wannabe country star Krystal and her avaricious husband/manager. Insulin, arson, psychotropic drugs, teenage rebellion, and horse insurance will all come into play before a gun is shoved in Sarah Booth's face and the Kinkster himself arrives to rescue her. Read full book review > 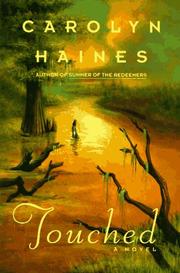 FICTION & LITERATURE
Released: July 22, 1996
TOUCHED
by Carolyn Haines
FICTION & LITERATURE
Released: July 22, 1996
TOUCHED
by Carolyn Haines
Haines (Summer of the Redeemers, 1994) ladles on the pluck and grit as she limns the life of Mattie, a strong woman who comes to live in a preternaturally mean Mississippi town, where she faces down the local bigots, survives a severe spousal beating, and exacts a deadly revenge. Jexville in 1926, as 16-year-old mail-order bride Mattie soon learns, is a town where intolerance is as unavoidable as the humidity. The people are devout, suspicious, narrow-minded. They're also hypocrites: The men drink bootleg liquor; the women are malicious; and both sexes support a husband's right to beat his wife. To be in any way different is to invite trouble, which is exactly what Mattie's new friend JoHanna McVay, married to handsome Will, a purveyor of moonshine to political bigwigs, often does. Mattie, newly married to Elikah, the town's barber, meets JoHanna and her nine-year-old daughter, Duncan, at a children's party. Duncan, struck by lightning, soon acquires the ability to foretell the future. Then Mattie is violently beaten and sexually humiliated by Elikah. Pregnant, she decides not to have his child. JoHanna, accordingly, arranges for an illegal abortion and tries to convince Mattie to leave Elikah, but JoHanna soon has troubles of her own: Duncan's accurate predictions of death and destruction convince the locals that she's a child of Satan. The McVays decide to go into hiding; Floyd, a friend of Mattie and Duncan's, is brutally murdered; and Mattie kills a local bootlegger as she tries to escape murderous Elikah. In the long calm post-mayhem, Mattie remains married, but Elikah, no longer a wife-beater, plans a deadly revenge. As WW II begins, another frightening prediction from the now-adult Duncan finally impels Mattie to wreak her own vengeance. Action overload as Mattie and friends more than prove their credentials as cool, modern, and independent women able to cope with everything. Read full book review > 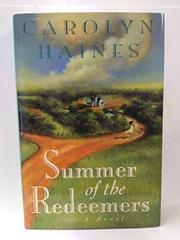 Released: June 9, 1994
SUMMER OF THE REDEEMERS
by Carolyn Haines
Released: June 9, 1994
SUMMER OF THE REDEEMERS
by Carolyn Haines
A coming-of-age novel set in rural Mississippi during the 1960s offers up such potentially juicy elements as racial strife, religious fanaticism, child abuse, and grown-up duplicity, yet proves disappointingly ``young adult'' in perspective and style. Haines, who has written several novels under a pseudonym, takes as her narrator 13-year-old Bekkah Rich, who may look like any other kid living on Kali Oka Road outside of Jexville, Miss., but who is in several significant ways atypical. Daughter of a children's book author and a college professor, Bekkah is destined by brains as well as background for a larger world that few of her playmates will ever see. Nevertheless, in the summer of 1963, that world makes an appearance on Kali Oka Road in two quick, successive strokes: Zombielike members of the Blood of the Redeemer Church move into the abandoned Live for Christ Church quarters nearby; and the old, deserted McInnis plantation is taken over by a shockingly eccentric, bleached-blond horse owner named Nadine Andrews. Curiosity tempts Bekkah to spy on the weird ``Redeemers,'' and her passion for horses leads her to sign up as Nadine's stable hand, despite stern orders from her mother to the contrary. As the summer slowly passes and Bekkah's liberal parents face their own first battles in the civil rights war, the teen discovers horrifying goings-on that seem to include the selling of babies, the beating of children, the torture of animals, the seduction of minors, and, finally, the murder of an innocent child. Haines's evocation of a particular place and time are certainly masterful, but her melodramatic plot is severely hindered by her narrator's early-adolescent point of view. Bekkah's simple heart gets in the way of what might otherwise have been a gripping story, leaving the reader wanting more. (Literary Guild selection; author tour) Read full book review >