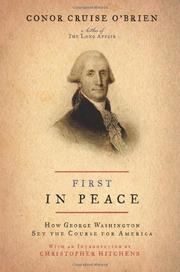 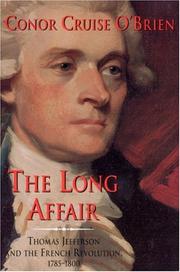 BIOGRAPHY & MEMOIR
Released: Nov. 1, 1996
THE LONG AFFAIR: THOMAS JEFFERSON AND THE FRENCH REVOLUTION, 1785-1800
by Conor Cruise O'Brien
BIOGRAPHY & MEMOIR
Released: Nov. 1, 1996
THE LONG AFFAIR: THOMAS JEFFERSON AND THE FRENCH REVOLUTION, 1785-1800
by Conor Cruise O'Brien
Irish scholar and former diplomat O'Brien (Ancestral Voices, 1995, etc.) examines two dark sides of the Jeffersonian legacy: his enthusiasm for the French Revolution, and his support for the slave-based Southern economy. O'Brien argues that Jefferson's tenure as an American diplomat in Paris during the last years of the ancien rÇgime were not happy. Unlike Benjamin Franklin, he was not popular in Paris, nor did he seem much enthused by the French ally. However, he was excited by the French Revolution in 1789, so much so, O'Brien argues, that his political philosophy and career were transformed. Jefferson and his Republicans were not troubled by the excesses of the Reign of Terror, O'Brien argues, until the terror became a political liability. Also, because of his belief in revolution, Jefferson viewed with a benign eye such American insurrections as Shays' Rebellion and the Whiskey Rebellion. O'Brien argues that Jefferson's role in encouraging Citizen Gent in his attempts to undermine President Washington's policy of neutrality in European wars smacked of conspiracy. On the other hand, O'Brien contends, while Jefferson passionately advocated the egalitarian ideals of the French Revolution, he never seriously contemplated manumitting his own slaves. O'Brien argues that the egalitarian promise of the Declaration of Independence and Jefferson's many statements against slavery were partly intended for political consumption and concealed both a deep-rooted support for the Southern slave system and a profound racism. Jefferson was horrified at the violent uprising in Haiti, in which black slaves overthrew their white masters to found their own republic, which brought Jefferson's tendencies into conflict and ended his ``long affair'' with the French Revolution. On Jefferson's legacy to America, O'Brien ends by questioning the future status of a slaveholder with racist views in America's increasingly multicultural society. O'Brien makes a well-argued revisionist contribution to the literature on Jefferson. Read full book review > 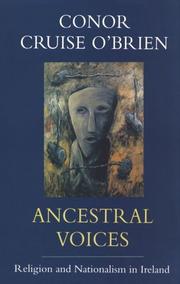 HISTORY
Released: Dec. 1, 1995
ANCESTRAL VOICES: RELIGION AND NATIONALISM IN IRELAND
by Conor Cruise O'Brien
HISTORY
Released: Dec. 1, 1995
ANCESTRAL VOICES: RELIGION AND NATIONALISM IN IRELAND
by Conor Cruise O'Brien
A courageous book by one of the most distinguished living Irishmen (now pro-chancellor of the University of Dublin and an editor of both the Observer and the Atlantic Monthly), which slices through the superficial optimism currently prevailing about Northern Ireland. At the heart of the problem, for O'Brien (On the Eve of the Millennium, p. 1258, etc.), himself a Catholic, is the ``Catholic- nationalist ambivalence'' on Northern Ireland: ``On the one hand, one wants peace with it; on the other hand, one wants to destroy it.'' This ambivalence has been complicated, in O'Brien's view, by the role of the Catholic Church. For much of Irish history, the Church attempted to discourage expressions of nationalism, but in the latter half of the 19th century it began to support Catholic nationalism, in part to prevent the nationalist cause from being taken over by Protestants. The outcome of these ``ancestral voices'' inflaming nationalist feelings (as in the line from Coleridge's Kubla Khan, ``ancestral voices prophesying war'') was the Easter Rising of 1916 and the later civil war. The generation that experienced those miseries was ``vaccinated against the ancestral voices. The younger generation has no such immunity.'' In O'Brien's view, Gerry Adams, the leader of the political arm of Sinn FÇin, and John Hume, the leader of the Social Democratic and Labor Party, are manipulating the peace process to push Northern Ireland into an increasingly untenable position and intend to force the British to leave the country. O'Brien predicts that guerilla warfare will erupt again, that the British may go, ``leaving both sets of natives to fight it out,'' and that the ceasefire ``represents neither peace nor a basis on which peace can be constructed.'' The book bears some signs of haste in its composition, but its somber and persuasive message should gain it wide and deserved attention. Read full book review > 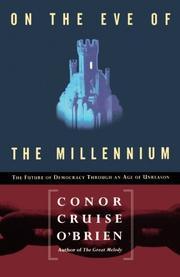 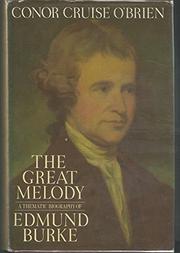 HISTORY
Released: Nov. 1, 1992
THE GREAT MELODY: A THEMATIC BIOGRAPHY OF EDMUND BURKE
by Conor Cruise O'Brien
HISTORY
Released: Nov. 1, 1992
THE GREAT MELODY: A THEMATIC BIOGRAPHY OF EDMUND BURKE
by Conor Cruise O'Brien
O'Brien (Pro-Chancellor/Univ. of Dublin; Cunning and Passion, 1988, etc.) argues here that Edmund Burke (1729-97), widely considered the ``father of modern conservatism,'' was really a ``liberal pluralist.'' Neither biography (not even an ``unconventional'' one, as O'Brien claims) nor anthology (too little Burke, too much O'Brien), this is an extended political essay focusing on four arenas of 18th-century political life—Ireland, America, India, and France- -preceded by an attack on the dominant school of Burke scholarship, which, in assessing Burke as a conservative, consigned him, O'Brien says, to ``the ash-bin of history.'' O'Brien believes that he can provide the ``basis and essentials for a Burke revival'' by proving that Burke was, in fact, a prophet of revolution. The ``great melody,'' a phrase derived from Yeats, describes Burke's legendary eloquence but also his primary theme—defending individual liberties against political tyranny wherever it appears—a theme that was, O'Brien claims, the source of those inconsistencies for which Burke is often criticized, such as his support of the American Revolution and his opposition to the French. According to O'Brien, ``fantasia,'' a word derived through Isaiah Berlin (with whom O'Brien has a long exchange in the epilogue) from Vico—a phrase meaning ``historical imagination''—was Burke's distinguishing gift. Though strong on political narrative, O'Brien dismisses as irrelevant Burke's literary journalism, including his essay ``On the Sublime and the Beautiful,'' which elaborated an aesthetic that informed Burke's entire life. The author also dismisses the importance to Burke's thought of his large, raucous, and disorderly family, to whom he was devoted and among whom his grand, elitist, and orderly political ideals evolved. Strong on O'Brien but weak on Burke—and most readers will have to resort to a handbook on the religious and political controversies of the 18th century, as well to as a conventional Burke biography, to make sense of it all. (Illustrations—not seen.) Read full book review >