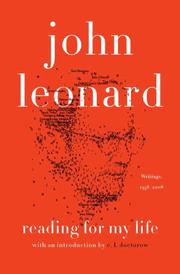 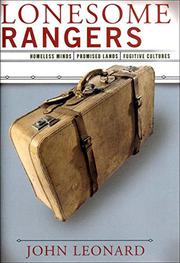 LONESOME RANGERS: HOMELESS MINDS, PROMISED LANDS, FUGITIVE CULTURES
by John Leonard
"Timely, irresistible cultural criticism from one of the best literary journalists in—and also outside—the business."
Extended quotation will be the tactic favored by most reviewers of this stimulating essay collection sparkling with Leonard's trademark breezy style and flair for phrasemaking (Smoke and Mirrors, 1997; When the Kissing Had to Stop, 1999). Read full book review > 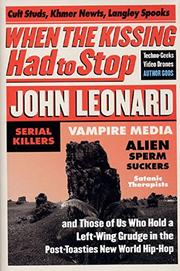 NONFICTION
Released: June 1, 1999
WHEN THE KISSING HAD TO STOP
by John Leonard
NONFICTION
Released: June 1, 1999
WHEN THE KISSING HAD TO STOP
by John Leonard
Manic essays on contemporary books, television, and cultural phenomena from a veteran critic for New York magazine and elsewhere. Leonard has collected his writings of the past few years—mostly from the Nation" into a new book, his eighth (after Smoke and Mirrors: Violence, Television, and Other American Cultures, 1997, etc.). He talks about books, events, and TV shows in verbals riffs more musical than intellectual: "I call The X-Files and like-minded cinemas "paranoirs.' Those regressive hypnotherapists who buy into alien abduction . . . I call "psyclops.' And those academics who insist on publishing monographs about such phenomena, I call "Cult Studs'—for their piratical boarding, under the black flags of Foucault and Lacan, of the pleasure craft on the pop seas; their swashbuckling style and their slaughter of the innocents." In small doses, the swash and buckle of his own prose can be entertaining. Often Leonard is funny, in particular when writing about the media extravaganza that made Lorena Bobbit a star. Perhaps his glib, rapid-fire, superhip attitudinizing is meant to mimic the media culture of hyperbuzz that it addresses—as if Leonard has his finger on the amphetamine-pumped pulse of urban life. But in the long run of a whole book, the droll patter of his literary sound bites becomes oppressive. Readers will search in vain for a set of compelling issues, sustained thoughts, or concerns to unite these reviews into a coherent whole. Instead, an idiosyncratic prose style and an intrusive personality do what little they can to unify the pieces collected for this volume. These essays on literature and pop culture, though entertaining in themselves, do not add up to much of a book. Read full book review > 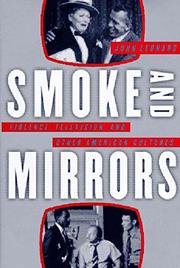 NON-FICTION
Released: March 13, 1997
SMOKE AND MIRRORS: VIOLENCE, TELEVISION, AND OTHER AMERICAN CULTURES
by John Leonard
NON-FICTION
Released: March 13, 1997
SMOKE AND MIRRORS: VIOLENCE, TELEVISION, AND OTHER AMERICAN CULTURES
by John Leonard
A sometimes stirring but numbingly overargued and long-winded defense of television. As it has expanded from its first lonely trinity of networks to the much-promised 500 channels, television has fallen into increasing disrepute. Quite a change, as New York magazine TV critic, and former New York Times book critic, Leonard (Private Lives in the Imperial City, 1979, etc.) carefully details, from the carefree pioneer days, when TV was almost unanimously welcomed into the national culture. Now it is held responsible for all manner of societal ills; politicians decry programmed sex and violence; V- chips are in the offing; and even the notion of a national culture has broken down. But as Leonard copiously argues (long past the point of convincing), the boob tube is not as bad as it's cracked up to be: ``A medium capable of China Beach, M*A*S*H, St. Elsewhere, Northern Exposure, Homicide, and The X-Files has less to be ashamed of than many of its critics do, and most of its competition.'' Then, just to drive his point home, Leonard looks for the good in every type of programming TV has to offer. From mysteries to movies of the week to talk shows to medical dramas, Leonard draws a madly elaborate portrait of a medium deeply and positively engaged with the issues and circumstances of our lives: ``How is it . . . that our politics and culture got so mean while television was asking us night after night to be nicer to women, children, minorities, immigrants, poor people, and strangers?'' But even Leonard's rousing, acerbic style can't pardon his excesses: 40-plus pages on police shows, much of it recapitulation of plots and characters, 30 pages on shows about AIDS—he just keeps going, and going, and going. Read full book review >