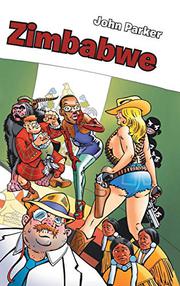 BIOGRAPHY & MEMOIR
Released: April 15, 1994
WARREN BEATTY: THE LAST GREAT LOVER OF HOLLYWOOD
by John Parker
BIOGRAPHY & MEMOIR
Released: April 15, 1994
WARREN BEATTY: THE LAST GREAT LOVER OF HOLLYWOOD
by John Parker
The author of Five for Hollywood (1991) comes up with a galloping, hard-breathing bio of Beatty that recycles the gossip about his love life against the plots of his films. Parker here offers a wavering image that may well resemble Warren Beatty. Unlike close buddy Jack Nicholson (also the subject of a Parker bio), Beatty never sits for Rolling Stone profiles—and it wouldn't matter if he did, since all his interviews are masterpieces of smokespeak in which he absorbs questions like a black hole, taking in matter but giving off no light. His first major Hollywood romance, Joan Collins, however, has much to say, though largely through Parker's rehashes of her autobiography, Past Imperfect. A seeming interview with early Beatty lover Leslie Caron also sounds suspiciously literary: ``[Method acting] happened as with the Impressionists who all have a common denominator in their painting...This school of acting was first created by Stanislavski, director of the Moscow Arts Theatre''—and so on. Parker takes us through all the headline affairs: with Natalie Wood (separated from husband Robert Wagner), Julie Christie, Diane Keaton, Michelle Phillips, Madonna, and Annette Bening, his wife and mother of his only child. Though Beatty's performances were always interesting and based in a discriminating choice of roles, he had to overcome a longstanding pretty-boy image to win critical favor by starring in and directing and/or producing Bonnie and Clyde (which rose above a bad press to become a smash hit), Shampoo, Heaven Can Wait, Reds—for which he won a directing Oscar—Dick Tracy, and Bugsy, among others. No sensational revelations here: just the glitz behind the tinsel. Read full book review > 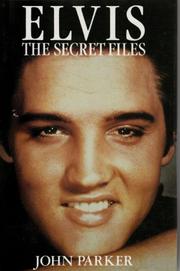 BIOGRAPHY & MEMOIR
Released: Jan. 1, 1994
ELVIS: THE SECRET FILES
by John Parker
BIOGRAPHY & MEMOIR
Released: Jan. 1, 1994
ELVIS: THE SECRET FILES
by John Parker
``Dead or alive, the magic of Elvis lives on'' claims the original dust jacket of this British import, emblazoning the words above a close-up of the King—a deliciously ironic sentiment given that here, as in his earlier books, Parker (Prince Philip, 1991, etc.) does his best, none too successfully, to stir up mud. Parker's angle is that the rock star may have been murdered by the Mafia, a conclusion he builds on stilts constructed primarily of previously unreleased interviews with Elvis associates (interviews not conducted by Parker), as well as of info gleaned from his ferreting through 663 pages of the ``FBI general file'' on Elvis. Parker digs out little that's not been revealed before, though he does highlight much that's not well known: particularly that J. Edgar Hoover began tracking Elvis as early as spring 1956, and that Elvis suffered constant money problems that, in 1976, prompted his father to succumb to a scam involving the leasing of the singer's jet—a scam that soon came to the attention of the Bureau. Moreover, this scam allegedly was only a small part of a multimillion-dollar mob operation that was threatened when it became ``likely that Elvis and Vernon Presley...would be required to give testimony at [an] eventual trial.'' Parker dregs up the many minor mysteries surrounding the star's death—including the locking-away of the autopsy report—to support his case. Throughout, the author also manages to provide a lurid account of Elvis's decline into drug-decay, and speculates that his 1970 Oval Office meeting with Richard Nixon prompted—through the singer's envy of the Beatles—Nixon's persecution of John Lennon. Not bad as a concise chronicle of the superstar's dark side, but Parker's case that Elvis may have been murdered will convince few—after all, we all know that he's hiding out in Kalamazoo.... (Forty-two b&w photographs) Read full book review > 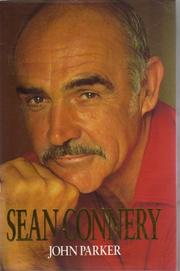 BIOGRAPHY & MEMOIR
Released: Aug. 1, 1993
SEAN CONNERY
by John Parker
BIOGRAPHY & MEMOIR
Released: Aug. 1, 1993
SEAN CONNERY
by John Parker
Many interviews (though none with Connery) give a lift to this otherwise placid celebio of the popular actor, which follows on the heels of Andrew Yule's 1992 Connery bio of the same title—a much stronger work. There's really no need to read this new Parker (Prince Philip and Five for Hollywood—both 1991, etc.) if you've already read the Yule, though readers coming fresh to the life of Connery should find it steadily interesting, with Connery's quotes and maverick- like behavior giving bounce to some pages—as do the interviews. The actor's rise from rags to riches came about by indirection, with Connery—raised in Edinburgh—having many lowly jobs as a youth, then being dropped by the Royal Navy for a stomach ulcer after a year's service. His interest in bodybuilding led to a small part in a British roadshow of South Pacific, which led to larger parts on stage and TV, his first big role being the punch-drunk lead in Requiem for a Heavyweight. Connery, Parker tells us, liked Marlon Brando's underplaying and studied Spencer Tracy and Cary Grant's ways of bringing their roles to themselves rather than changing themselves for the roles. Parker respects his subject's private life far more than Yule does, and doesn't dig as deeply into the acting. Most interesting here is the information about Connery's avid pursuit of being paid well and to the penny for what he does, which brought about his suit against producer Albert R. Broccoli to collect money due for the actor's James Bond performances. Strong pages here and there, but many in Sunday supplement style. (Photographs) Read full book review >

BIOGRAPHY & MEMOIR
Released: Oct. 21, 1991
PRINCE PHILIP: HIS SECRET LIFE
by John Parker
BIOGRAPHY & MEMOIR
Released: Oct. 21, 1991
PRINCE PHILIP: HIS SECRET LIFE
by John Parker
Parker's previous book about royalty, on the Duke of Windsor (King of Fools, 1989), was a gossipy quick read, but Prince Philip makes for a tamer subject with less egregiously dirty laundry. Born in Greece in 1921 to German/Danish royalty, Philip was raised largely by relatives, including his mother's brother, Lord Mountbatten, who urged him to enroll in the Royal Naval College- -where he first met then-Princess Elizabeth. Although the relationship that would develop over many years was said to be ``true love,'' during his wife's first pregnancy the Prince caused a minor scandal by frequenting men's clubs and nightclubs. When Elizabeth became queen, Philip spent much time traversing the globe; he was shooting crocodile and touring Antarctica, for instance, while Britain was facing the Suez Canal crisis. When a friend resigned a palace post under reports of adultery, the tabloid buzz was that Philip and Elizabeth's marriage was also in trouble—but together they remain. So what's here of the promised secret life? Not much. Parker (Five for Hollywood, 1991) reports affairs and a possible illegitimate child, but he depends heavily on printed sources, offers little flavor of the prince's alleged naughty leanings, and pads his account with tedious filler (endless genealogy, long discussions of Philip's charitable works). Of interest to the royalty-obsessed only. (Sixteen pages of photographs—not seen.) Read full book review > 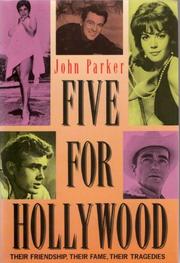 BIOGRAPHY & MEMOIR
Released: May 1, 1991
FIVE FOR HOLLYWOOD: THEIR FRIENDSHIP, THEIR FAME, THEIR TRAGEDIES
by John Parker
BIOGRAPHY & MEMOIR
Released: May 1, 1991
FIVE FOR HOLLYWOOD: THEIR FRIENDSHIP, THEIR FAME, THEIR TRAGEDIES
by John Parker
Monumental scissors-and-paste production on the lives of Elizabeth Taylor, Natalie Wood, James Dean, Rock Hudson, and Montgomery Clift. The five lives retold here intertwined with one another; four came to hard ends. Taylor, the survivor, arrived in Hollywood first, as a child star (Lassie Come Home), followed soon after by fellow child star Wood. Taylor found herself falling for brilliant Broadway actor Monty Clift, now her costar in A Place in the Sun. When Clift was revealed to be gay, she told him she'd always be there when he needed her—and he needed her often. Clift had unresolved mother problems he acts out with a fellow drunk/pothead/pillhead, aging singer-actress Libby Holman. When Holman read the Sunset Boulevard script (Clift had signed for the male lead as a failed scriptwriter studding for an aging Hollywood siren), she felt vast discomfort at the story's closeness to home and persuaded him to get out of the role. Meanwhile, young Roy Scherer, Jr., later known as Roy Fitzgerald, then as Rock Hudson, all milk-faced good looks and toothiness, signed up with voracious homosexual agent Henry Willson, who led him from bed to bed through the lower levels of B-pix to eventual stardom with Taylor and young genius James Dean in Giant. Dean, meanwhile, himself a bisexual, had been romancing Wood, his costar in Rebel Without a Cause—and then stir in Warren Beatty, Mike Todd, Richard Burton, Dean's car crash, Monty's drugs, Natalie's big dip, Rock's AIDS, and so on, if you're still awake. Parker offers not a single fact not already ground to pulp by earlier bios and the scandal sheets. Read full book review >